Brahmastra is a work of star-struck ambition and high-octane energy whose razzle-dazzle hits many happy notes, observes Sukanya Verma. 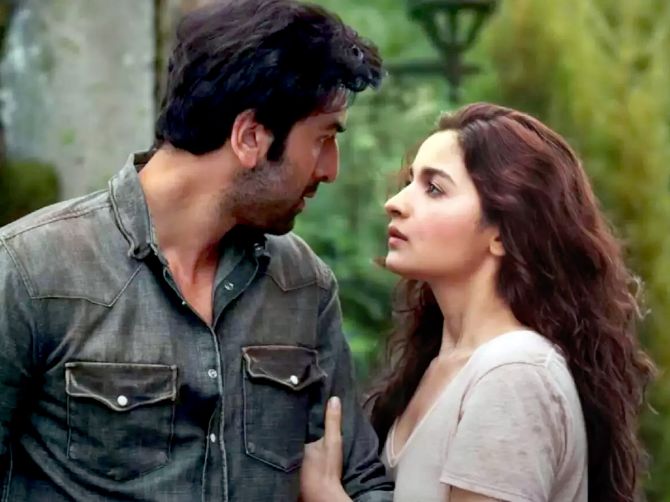 India is a gold mine of mythological stories about good versus evil. And Amitabh Bachchan's robust voiceover at the beginning of Ayan Mukerji's long-in-the-making extravaganza makes a strong case for such amar chitra kathas while explaining the origins of the one astra to rule them all -- the Brahmastra.

Despite its best intentions, Bollywood is yet to master the superhero genre, strongly relying on the sorcery of successful Hollywood franchises to create a second-hand, second-rate spectacle.

Planned as a trilogy, Brahmastra's first edition Part One Shiva isn't entirely above this practice.

Ayan's Astraverse has obvious influences of The Lord of the Rings, Harry Potter, Star Wars, Doctor Strange, X-Men and his philosophy of triumph rooted in love and light could well be traced to every single celebrity Diwali greeting.

But Brahmastra is no cheap knock off.

It's a work of star-struck ambition and high-octane energy whose razzle-dazzle hits many happy notes over the course of nearly 167 minutes.

Where it falters is clunky writing (dialogues by Hussain Dalal are lamentably bad) and a cluttered third act that visibly struggles to wield its wildfire of a scenario Ayan has enthusiastically imagined but not completely thought through. Not having any clarity on Part 2 adds to that frustration.

When the going is good though, Brahmastra is quite a breeze cashing in on its fantasy card to the hilt.

From ancient times to 'naya India,' a mighty weapon capable of mass destruction and devastation, if used erroneously, finds itself zealously guarded from dark forces by worshippers of light.

Oblivious of his role in these grand, dangerous schemes, a vibrant deejay and Mr India brand of orphan is revelling in the festive season, dancing the life out of his limbs in what appears to be Balam Pichkari's Dussehra version.

Meanwhile a scientist's perilous fate, evoking an epic Swades crossover, and the threat to an artist's (Nagarjuna Akkineni) life at the hands of the creepy Junoon (a super scary Mouni Roy), a hornless-Maleficent-types hotly pursuing every single weapon bearer in the Astraverse on the orders of her mysterious master plays out telepathically before Shiva's eyes.

Unsettling visions and immunity to fire raise many questions in his mind, answers to which lie high up in the Himalayas (Bulgaria passed off as Himachal Pradesh) where an aged Guru (Bachchan) runs a secret, senior citizen-dominated cult and school for those with special gifts.

As Shiva learns the roots of his powers and parentage (laying the groundwork for what has the makings of a promising sequel), he resolves to train and hone his skills alongside five other endowed youngsters that includes a cute munchkin called Tenzing.

But in the absence of context, they cannot leave any real impact.

Unless it's about Shiva or a villain whose identity forms the core of Part 2, what you get is what you see. Such a simplistic approach is disappointing even for a comic book template.

Even the private school looks more like a fancy mountain resort and not at all clandestine. Both its heroes and villains exist in a board game-like landscape that's just a dice's throw away.

Much of its onscreen magic comes from real-life couple Ranbir Kapoor and Alia Bhatt’s beaming chemistry.

While the movie took its own sweet time to take off, the duo met, fell in love, got married and are now months away from welcoming their first child.

Brahmastra's multiple cinematographers (Sudeep Chatterjee, Pankaj Kumar, Patrick Duroux, V Manikandan, Vikash Nowlakha) capture the various stages of their love and light in all its photogenic glory. It’s like someone glued LED strips under their skin, glowing in love was never more literal.

What would otherwise go down as one of the most random meet-cutes in history is oddly mesmeric against Ranbir and Alia's besotted gazes.

One minute they are in an under-construction building's elevator discussing Putlu ki party (probably an in-joke only producer Karan Johar and clique have access to) and in the next, they Are doing some parkour-like antics only to dance off to Katrina Kaif's signature Chikni Chameli moves. In the twinkling of an eye, they have fallen in love, taken off to Benares and crooning Kesariya amidst a downpour of marigold petals.

Lest our mythology is weak, it is duly emphasised that Alia is Isha (another name for Parvati) and must be by Shiva's side at all times.

The actress would have little to do if she didn't impose herself on the adventure even if it means grabbing the hero’s arm and tremblingly ask, 'Hum bach jayenge, Shiva?'

They have done far more complicated work to go wrong around characters worth one-line descriptions.

If anything, they elevate its aura and soften the blows that accompany each of its shabbily written dialogue.

Of its many set pieces, the highway car chase is one of the most thrilling.

Like a relentless T-1000 going after his targets in Terminator 2: Judgment Day, this one too goes for the same brand of full throttle menace.

Wish Ayan had gone for the same degree of aggression in Shiva's training instead of doing it the cliché Bollywood song and dance way.

Its pacing may waver as rapidly as its attention span, but Brahmastra's love for light is steady. 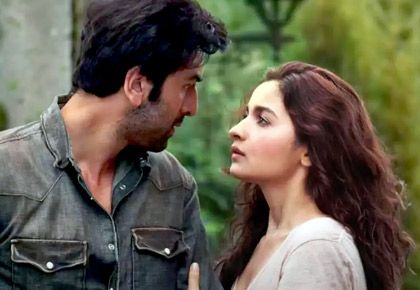