It's a treat to watch Pooja Bhatt explode on the small screen, applauds Sukanya Verma. All her creations (Lipstick Under My Burkha, Made in Heaven and Dolly Kitty Aur Woh Chamkate Taare) are woven around women from various walks of life stumbling through life's journey.

Neither devis nor devils, they are fascinating and frustrating in turns for their attempts to break out of a pigeonholed existence where different rules apply for men and women.

Targeting this glaring gender bias and society's role in facilitating it forms the root of rebellion in Shrivastava's female characters.

'They bleed for their dreams and expect others to bleed for them,' an adolescent voice explains, as if setting the stage for Shrivastava's brand new six-part series now streaming on Netflix.

Doused in expository voiceover and cynical philosophising straight out of a teen's diary, Bombay Begums chronicles the lives of five women at different stages of womanhood.

Set in the world of finance, it looks at the challenges faced by an urban working woman, as superior and subordinate, juggling work with home and warding off sexual predators.

There's Shai (a listless Adhaya Anand), a precocious teenager in a mad rush to grow up and find something to rebel about.

She picks on her stepmother Rani (Pooja Bhatt) for no apparent rhyme or reason except she is not blood.

Blood is on her mind where she fantasises about menstruating and attracting a classmate following a tell-all sex education session in school.

Is teaching pubescent kids how ovulating mates are more attractive to men part of the syllabus now?

Shai's personal observations about a woman's body and her business run parallel to the feministic arcs of Bombay Begums. Too often though, the context goes missing and her words ring hollow.

What the writing lacks in complexity, the acting compensates through nuance.

Shahana Goswami as Fatima is breathtakingly measured in her portrayal of the ambitious architype compelled to choose between promotion and motherhood.

The burden of playing the perfect couple, the guilt she fights, the recklessness she displays are something her not-as-successful husband (Vivek Gomber, ever so good at moderation), craving traditional happiness, is not equipped to understand.

What Fatima has in heaps, her underling Ayesha (Plabita Borthakur) lacks in entirety: Sophistication.

When we first meet the Indore-hailing investment banking wannabe, she appears enamoured and desperate for approval.

Ayesha's casual manipulations and provocations appear much too designed for both -- the circumstances and judgement she is likely to invite.

Though always engaging, Borthakur's character is all over the place and driven by too many issues to keep track.

Her shabby handling of non-heteronormative narratives only adds to the confusion as does a half-baked attraction around sympathetic co-worker Ron (Imaad Shah).

At the centre of the storm is Rani (Bhatt), a top brass in the banking sector struggling for acceptance from her artist husband's (Danish Husain) children from his first marriage and keeping her job around highly competitive and sexist male colleagues constantly undermining the authority of their lady boss.

In denial about her imminent menopause, Rani's small-town values and arduous climb from teller to CEO is a complex blend of steely and vulnerable.

Guided by a skewed moral compass where protecting her kin at any cost is all that matters, Rani surrendering to the blackmailing by Lily, a loud bar dancer (Amruta Subhash hitting more broad notes than brave) determined on providing her bright son better prospects, no matter what, echoes her own maternal instincts.

Varying degree of mean and self-seeking men move in their midst enforcing their patriarchy and entitlement but a cocky hotshot, treated with sly command by Manish Chaudhari, is the one embodying his lot most brazenly.

Except the casting is top notch and the six episodes, nearly one hour each, pass like a breeze.

Mostly though, it's a treat to watch Pooja Bhatt explode on the small screen.

And her pitch-perfect delivery of a ferocious yet flawed, insecure achiever on the path to course correction is reason enough to catch Alankrita Shrivastava's predictable yet plucky Web series.

In Bombay Begums, the lives of five unique women repeatedly cross paths, wherein they empower one another as well as enable the harassment among them, quite like the objectives it culminated into Apple's The Morning Show.

Only when this contradiction and apprehension is overcome and women rally around each other, a revolution can be achieved and avert the #MeToo crisis. But to what effect, only the hinted-at season two can tell.

Bombay Begums is streaming on Netflix. 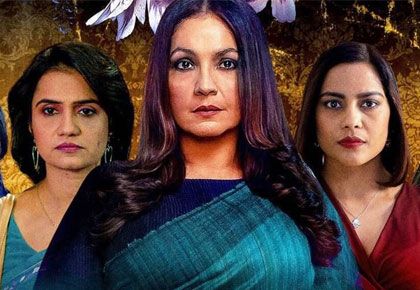