Breathtaking frames, postcard locations, a beautiful cast and soul-soothing music make 99 Songs a perfect escape to a world not ravaged by a virus.

The feel-good vibe is overwhelming and often distracts you from the sketchy screenplay and bland story. Unfortunately, A R Rahman's debut into film production just can't get past the style to focus on the substance.

Jay (Ehan Bhat) is a musician looking to make his mark. But his father is not in favour of his passion.

Reason? Music destroyed their family once.

But Jay is relentless.

Sophie Sighania (Edilsy Vargas) is the speech-impaired daughter of a rich entrepreneur. She paints and dances to express herself.

Her father is a fan of Jay's talent, but him? Not so much. So he challenges Jay to compose 100 songs to prove he is worthy of Sophie.

Dejected at first, Jay decides to do it and the rest of the story chronicles his struggle.

Like I said, the beauty of 99 Songs will mesmerise you. It's pure, innate, smooth, free-flowing and magical. And Rahman's touch elevates it to a level nobody can match.

But the story -- written by A R Rahman; screenplay by Vishwesh Krishnamoorthy -- doesn't offer any fresh perspective about an artiste's desperation and enlightenment.

Jay's parents's rejection of his choice of profession, Sophie's father as the villain, a tortured artiste's narrative and starry cameos give a push to the story and serve up an ending to soothe everyone. 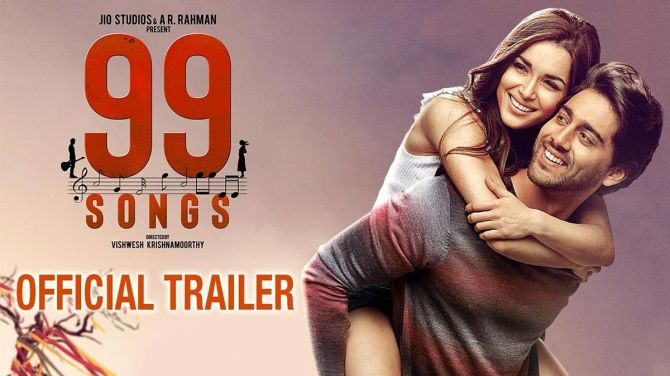 99 Songs is nothing but an amalgamation of every cliche of the genre. Also, the patchy flashback sequences are jarring as they aren't properly summarised.

The makers have missed out on the opportunity to flesh out the characters.

Jay tries his best to inspire, but he isn't given enough room to do so.

99 Songs talks about struggle without delving deeper into Jay's psyche. The rejection, the loneliness, the love...all of it is lost within seconds of it appearing on the screen.

Sonia is just a mute spectator, both in her life and in love. She hardly has anything to do in the film. Devoting a bit more time to her character would have added rich details to this film, which is made so that we can feel for the characters.

Performances are what helps one finish a movie.

This is Ehan Bhat's debut film and he does an incredible job. His transitions are so smooth that you will be spellbound.

Edilsy, as I mentioned above, has got a raw deal. Yet, even in those little sequences, the girl has managed to leave you charmed.

Manisha Koirala and Lisa Ray's cameos are eye-pleasing and a perfect break from the dull storyline.

A R Rahman's 99 Songs is the tale of a tortured artist whose struggle is blurred in favour of healing music. But then, what's a movie without a story?