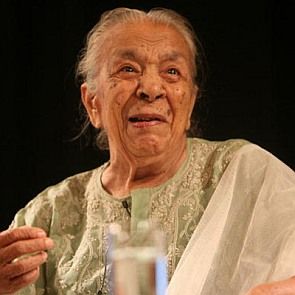 Legendary actress Zohra Sehgal, who essayed character roles with aplomb in a career spanning both theatre and cinema, died in New Delhi on Thursday. She was 102.

A Padma Vibhushan awardee, Sehgal breathed her last at Max hospital in Delhi around 4:30 pm.

"She died of a cardiac arrest this afternoon. She was unwell for last three-four days," daughter Kiran told PTI.

Sehgal would be cremated on Friday at 11 am at the Lodhi Road crematorium.

The news was broken in the night by historian Irfan Habib who tweeted, "Just confirmed that Zohra Aapa is no more..."

In another tweet, he said, "Extremely sad to know about d passing away of Zohra Sehgal, a woman who lived a full life on her own terms. Great loss to art and culture. RIP."

Sehgal, a vivacious personality, started her career as a dancer with Uday Shankar in 1935. She had appeared in many Bollywood films as a character actor as well as in English language films besides television series and plays.

A Padma Shri awardee, she also received the Padma Vibhshan in 2010.

Sehgal, called the "laadli" of entertainment and the doyenne of Indian theatre, was part of many a film and stage production over the past seven decades.

She was a member of the Indian People's Theatre Association and in 1946 debuted in its first film production "Dharti Ke Lal", which dealt with the Bengal famine. She also acted in another IPTA film -- Chetan Anand's "Neecha Nagar".

Kiran, herself an Odissi dancer, expressed grief that during her dying days, her mother could not even get the government flat she has asked for.

"She was always so full of life and energy. I am in very different state of mind right now...But, what is more tragic is that during her dying days, she could not even get the government flat she had asked for," she told PTI.

Meanwhile, tribute poured in from the film industry, soon after the news of her demise and celebrities took to Twitter to expressed their condolences.

"Zohra Sehgal passes away at 102 yrs...What a journey and what an immensely lovable co-star! Prayer for her blessed soul!," actor Amitabh Bachchan tweeted.

Filmmaker Madhur Bhandarkar paid his homage by sharing a vintage picture from the 1940 on the micro-blogging site.

"Zohra Sehgal, during a stage performance..." he said on his account.

"My condolences on the sad demise of the veteran actress Zohra Sehgal. Her legendary contribution in the field of art & cinema will live on," Javadekar tweeted.

Television producer Siddharth Basu tweeted," Forever young at heart & in spirit even at 102, the irrepressibly endearing Zohra Sehgal finally belongs to the ages. May she rest in peace."