'Just the nomination is a massive win for me' Prajakta Koli is among the brightest and most influential content creators on the Internet. Her nomination at the 48th annual Daytime Emmy awards for her 2020 documentary Creators For Change that focuses on Michelle Obama proves that.

An active campaigner for youth-centric issues, Prajakta has successfully tackled subjects like body image, online bullying, female subjugation, trolling and homophobia through her projects like Shameless and No Offence.

The Mismatched actress tells Rediff.com Contributor Sameena Razzaq, "When I started creating content, I was aware that there is no limit to the kind of opportunities that will come my way."

Your 2020 documentary Creators For Change that focuses on Michelle Obama has been nominated for the 48th Annual Daytime Emmy Awards. So are you getting home the Emmy?

Just the nomination is a massive win for me because I never thought it was even possible.

It is so much to process!

When I started creating content, I never thought I would be sitting here and speaking about this.

The Emmy is happening.

Then, our film also went to the New York Indian Film Festival.

I feel very lucky to live this life that has blessed me with experiences like these. The series tracks the experiences of adolescent girls in India, Vietnam and Namibia, overcoming adversity to pursue education. What are the challenges of education in smaller districts and towns?

Lack of opportunities is one of the biggest challenge girls face across the globe.

The fact that even the idea of education is sometimes not considered for girls is heartbreaking.

The documentary is a very real story of wins and defeats and conquering one's apprehensions.

You could be a girl in Namibia or a girl in Vietnam or in Lucknow... I felt this relates very well with the struggles we all go through at some level.

Your short film Khayali Pulao has made it to the New York Indian Film Festival. Do you think this journey of a 17 year old addresses certain archaic prejudices successfully?

Definitely! I think that is the soul of the film.

It focuses on how liberty and freedom is so different for different people.

I think what beautiful in Khayali Pulao is how simple the story is.

Khayali Pulao is about Asha, her way of getting what she wants irrespective of what she thinks the world wants her to get. 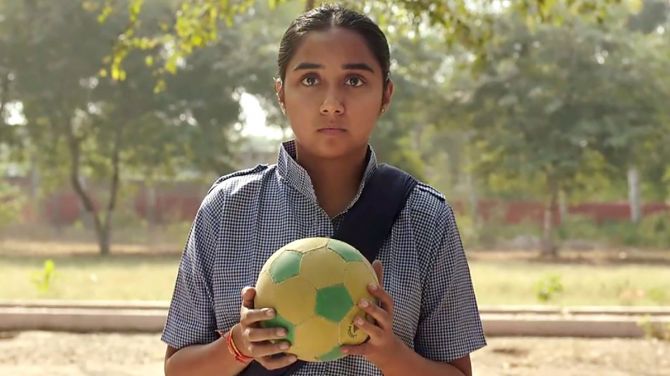 Netflix's Mismatched got you noticed. You are getting key roles in meaty projects now. How do you see this phase at this point in your career?

I never thought I would be getting these opportunities.

When I started creating content, I was aware that there is no limit to the kind of opportunities that will come my way.

Hence, this phase is very exciting.

At the same time, I am looking forward to trying new things.

Karan (Johar) had seen Khayali Pulao and he really liked my work in that.

Our casting director for Jug Jugg Jeeyo also loved me in that.

So it could be Khayali Pulao or Mismatched or anything. I think this visibility is what is opening up opportunities for me everyday. 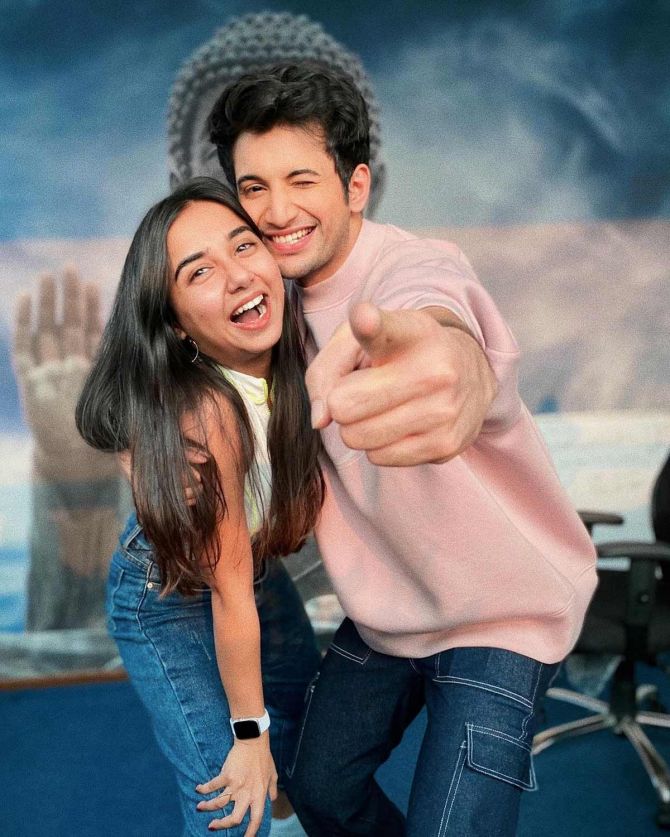 What can we expect from the second season of Mismatched?

I wish I knew.

I have been behind Akarsh's (Khurana, director) life to just let me read the script, and let's just start shooting, but the pandemic has delayed everything.

I am kind of looking forward for things opening up little bit, so that we can start shooting.

I have read the book When Dimple Met Rishi and I love what Sandhya Menon has written, so I am really looking forward to this.

I think Dimple and Rishi will navigate through their relationship a little bit more in Season 2.

Jug Jugg Jeeyo will see you share the screen with Anil Kapoor, Neetu Kapoor, Varun Dhawan and Kiara Advani. How was your experience?

I thought it would be tough because it was my first film and a Dharma Production. That's a big banner, so I was obviously nervous. Also, since I was working with massive stars like Anil Kapoor, Neetu Kapoor, Varun and Kiara.

But when I was on set, I quickly realised that when the camera is rolling, they are just artistes who love their job.

They are just performers who love doing what they do.

That can be very empowering for someone like me who is trying to learn new things.

Everyone was very helpful.

I used to ask a lot of questions to our director (Raj Mehta) and he would always entertain them.

I would hang around on the sets and see the other scenes too and learn from them.

Observing them in person in flesh, doing what they love, was very inspiring. Comedy is a serious business. Where do you get your ideas from?

It's a very basic trial and error situation.

I know that my online audience is changing everyday, but at the same time, I am also changing as a creator and as a person.

The beauty of creating content on my YouTube channel is that I have accepted the fact that not every video, every piece of content I upload is going to work and go viral.

You learn by trying new things.

You have been an active campaigner for youth-centric issues. You have successfully tackled subjects like body image, online bullying, female subjugation, trolling and homophobia through your projects like Shameless and No Offence.
Have you experienced anything of this personally?

Yes, of course. I was very insecure about my body when I was young, so the shaming that happened was very internalised.

I was never really bothered by things anyone said but I hated my body for a very long time.

I was extremely skinny and that's the thing about body shaming -- there is no process. You could be the size that people think is right but you may still feel you are fat.

I was never comfortable in my own skin.

I think that is what came into play when we made Shameless and started speaking against body shaming.

It really isn't about what others say, the trouble starts when you start believing what they're saying.

Internet trolling has been a part and parcel of my life as I have been on on the Net for over six years.

I have had friends who have gone through tough days in their life because of homophobia.

Every piece of content, every thought, has stemmed from reality and personal experiences.

That is why these issues are so close to my heart. 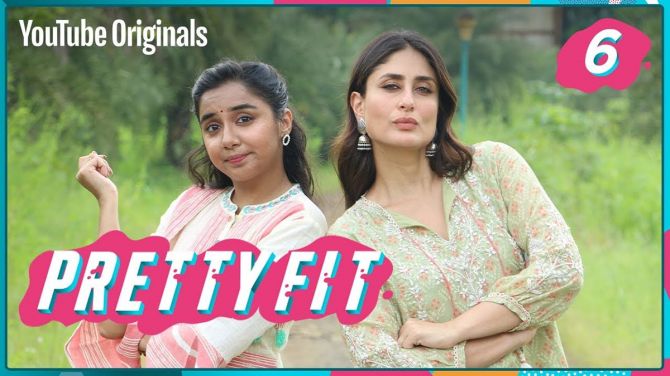 IMAGE: A scene from Pretty Fit.

You did a light-hearted, fitness-based chat show called Pretty Fit that featured celebrities like Kareena Kapoor Khan, Sanya Malhotra and Neha Kakkar. Whose fitness regime has intrigued you the most?

Pretty Fit released last January. The thing about that show is we weren't really doing what they do for fitness.

We were actually trying primitive techniques.

I remember we did pottery with Kareena Kapoor Khan, fishing with Mithila Palkar, sugarcane farming with Sumukhi Suresh, went to a stable with Neha Kakkar... trying things that women have been doing for fitness since the primitive times.

I had so much fun trying new things.

I remember talking to Kareena about how much she loves food and that has made her so relatable because we are so used to thinking may be actresses have to work out because they want to look a certain way.

I remember Kareena saying that she works out so that she can eat whatever she wants. That's great motivation.

Who do you think is a social media star?

That's the beauty of it! How do you choose?

We don't have genres anymore.

I know so many beauty creators who are doing wonderful comedy skits.

It is impossible to choose, but I will always be a massive fan of Lilly Singh.

She made it look so easy.

When I started making content, I believed I could do it because I used to watch her content.

Also, I think Lilly is one of the most brilliant writers around.