Richa Chadha makes perfect sense when she talks about Bollywood predators, her career, even her love life.

Richa will be seen in Fukrey Returns where she bullies Ali Fazal, Varun Sharma, Manjot Singh and Pulkit Sharma.

Fukrey, which released in 2013, was a surprise hit. Fukrey Returns releases on December 8.

Fukrey Returns comes four years after the first film. How difficult was it to get back into character?
Did you have to watch the first film again?

The director (Mrighdeep Lamba) had a screening for the entire cast and crew before we started shooting for Fukrey Returns.

It was not difficult getting back into the character of Bholi Punjaban because all of us have kept in touch.

We also had a few workshops and readings.

Which of the four male characters is your favourite?

I have a different equation with all the boys. But my favourite is Choocha (played by Varun Sharma) because he develops a crush on me.

Also, because of his weird powers (his dreams always come true!), a lot of funny things happen in the film. It was a complete mad house. That's the beauty of working with friends. You can feel very secure.

We had a great time, we cracked a lot of jokes.

I first interviewed you in 2012 before the release of your breakout film Gangs of Wasseypur.
How has life changed since then?

So in that sense, life has not changed.

Once in a while, I remember that I am famous.

People want to take pictures with me.

Life has changed. There have been ups and down.

It has never been easy doing the work I do, but there's a long way to go.

It is important to remember to stay honest and keep your friends close.

Are you happy the way your career has shaped up?

I am not upset how my career shaped up, but I am not satisfied either. Does that make sense?

I am not taking away from accomplishments, I am not being ungrateful. I had some amazing luck and I got awards for my hard work.

I have got some great international exposure.

I love the work I do.

I am very excited that good work keeps coming my way! You wrote about the #MeToo campaign on your blog. Have things changed since then, even a bit?

That blog was written last month. I don't think it will change so quickly.

It will probably take decades for real changes to happen.

For predators, fear is important. They will continue till they are caught.

If they are not caught, they will continue forever. Changes need to happen there.

Why do you think no one talks about abuse in Bollywood?

Comparing Bollywood and Hollywood is like comparing America's market, roads and economy to ours.

I will tell you why actors are safe in Hollywood. It's because of the royalty they get.

They receive royalty even when they get too old or unfit to work. They get a pension if they are a member of SAG (Screen Actors Guild).

So how can you compare? Their union is so strong!

When somebody comes forward, they don't risk losing their livelihood.

But here, they will risk losing their livelihood.

Secondly, there is a reason why Angelina Jolie or Gwyneth Paltrow could not come forward 20 years ago when they were accosted. They had to get to a position when they had power and their voice had relevance.

The ecosystem needs to change before anybody can speak up. In an interview, you had said that it is never a good time to be an actress in Bollywood. Why is that?

People make a big deal and say that now is a good time since better parts are being written for women.

But good parts were written for women even back in the day when we had Smita Patil and Shabana Azmi.

We had Nutanji, Madhubala, Meena Kumari... we come from a legacy of really good writing for women.

So one can't say that now it is better or that it was better earlier.

The industry is still male driven. Films are tilted heavily in favour of the male stars.

What difficulties did you face when you entered the industry?

The challenge is to get good parts in good films. That's an ongoing challenge.

It is not something that ends when you find success.

Do hits and flops affect you?

If Gangs of Wasseypur wasn't a hit, I would have not been in the position I am today.

Flops depress me; I am not a robot. If we make films, we want a lot of people to see it. 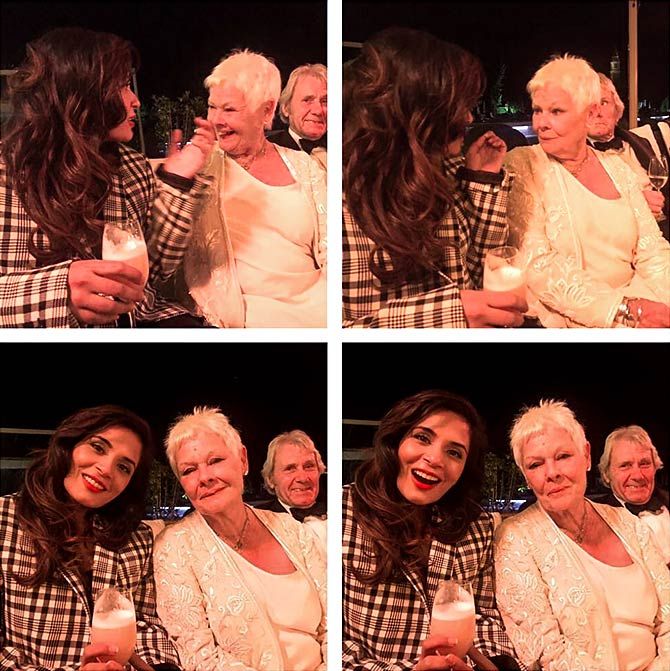 You walked the red carpet with Ali Fazal in Venice, and interacted with Judi Dench during the premiere of Ali and her film Victoria & Abdul. What was that like?

She is lovely! It is amazing to see somebody so humble and nice.

She is 82. Just looking at her, I can't believe she has such amazing energy.

She was promoting the film throughout. She promotes her films even at this age. It's amazing!

I believe that he (Ali Fazal) is worthy and has international talent. I am glad somebody noticed it. You are in a good space now. Any plans to marry soon?

No. I don't think these questions are nice. It is a very private thing.

Questions like these are reasons why people don't make their relationships public.

It's nothing to do with you. I'm saying this in general.

We get asked if we are going to marry, what will the religion be... People forget that we also have families.

Whenever somebody goes public with their relationship, there is a terrible amount of scrutiny. That doesn't happen when normal people get into a relationship, so it affects us.

That's we try to keep it low.

What is it like making a film with a boyfriend?

We shot for Fukrey Returns. Normally, there is no space for any kind of personal life or interaction when you are working together because there is no time.

We keep our professional and personal lives separate.

How difficult is it to dress for an international red carpet?

It is definitely difficult because there is a lot of scrutiny.

Things are obviously different now (than her first outing at Cannes).

I always have options. This time, I was styled by Ekta Rajani; she is very good with her work.

Now, there is no dearth of designers or clothes. But there is always some pressure when you walk the red carpet.

I pick clothes that work well on my body and my personality.