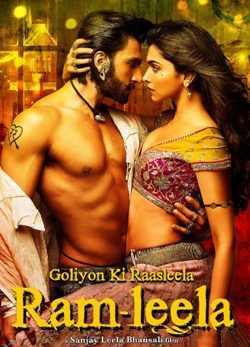 Days before its scheduled release, Sanjay Leela Bhansali has tweaked the title of his upcoming Deepika Padukone and Ranveer Singh starrer.

The Bombay High Court has issued a notice to Bhansali on a petition which claims that the title of his forthcoming film Ramleela "hurts Hindu sentiments" but declined to stay the release of the movie scheduled for November 15.

A division bench of Justices V M Kanade and M S Sonak stated that if there was any merit in the petition, then an appropriate order can be passed later.

The court also issued notices to co-producer Kishore Lulla, the Central Board of Film Certification, Ministry and Information and Broadcasting, distribution rights holder Eros International and the government of Maharashtra.

Petitioner Sandeep Shukla is a member of the Congress party and vice president of the Shree Maharashtra Ramleela Mandal, which organises the Ramleela performance

at Azad Maidan in Mumbai every Navratri.

His lawyer A P Panday argued that the name of the film suggested it had something to do with Lord Ram and the Ramayana.

The film, he added, had nothing to do with Lord Ram and its promos and posters "hurt the sentiments of Hindus" as they contained "vulgar, rude, offensive dialogue" and "objectionable scenes which degrade religious feelings".

When one hears the song Ramji ki chaal from the film, the image of Lord Ram comes to mind "but the fact is completely different".

In the wake of recent developments, R M Azim -- the legal head of Eros Entertainment -- issued an official statement.

'There is no stay or injunction for the release of the said film Goliyon Ki Rasleela Ram-Leela and the said film which has been certified by the Central Board of Film Certification under the Cinematograph act, 1952, can be released and exhibited throughout the world unobstructed,' the statement said.

With inputs from PTI
Agencies