'Sometimes it feels spiritual when you sing to a live audience'

'When you sing, you have to be in the song. You have to feel it or else, don't do the song.'
'That's why I haven't delivered a bad song in my career.' 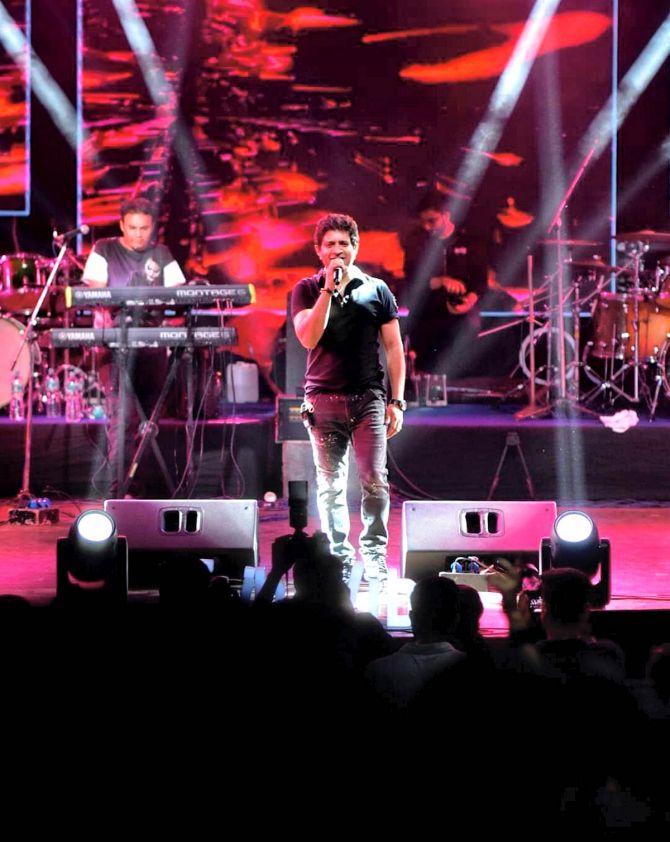 IMAGE: KK at the final performance in his life, Kolkata, May 31, 2022. Photograph: PTI Photo

Singer Krishnakumar Kunnath, popularly known as KK, passed into the ages on May 31.

An interview with the versatile singer, where he recounts his journey as a singer.

"I met Leslie Lewis at his studio and got my first jingle in Mumbai the day my son was born," KK had told Patcy N/Rediff.com.

I sang at school and college festivals in Delhi and won prizes too, but it was just a hobby back then.

I never thought of it as a potential profession.

I am not a trained singer.

I learnt music by listening to other singers like Kishore Kumar, Mohammed Rafi, Billy Joel, Sting... I tried to emulate them. It has been a constant process, and in that sense, I have had lots of gurus.

I was scared of sitting in a classroom and learning music.

I believed music has to be felt.

After my music teacher in school insisted, my father enrolled me in a music class. I attended for two days but did not understand a thing.

I got admission into college through the music quota.

In college, I used to play drums and sing. I was introduced to western rock and English there.

I can sing any song today unless it is classical, because classical needs a lot of training and I haven't learnt that. I can do light classical though. 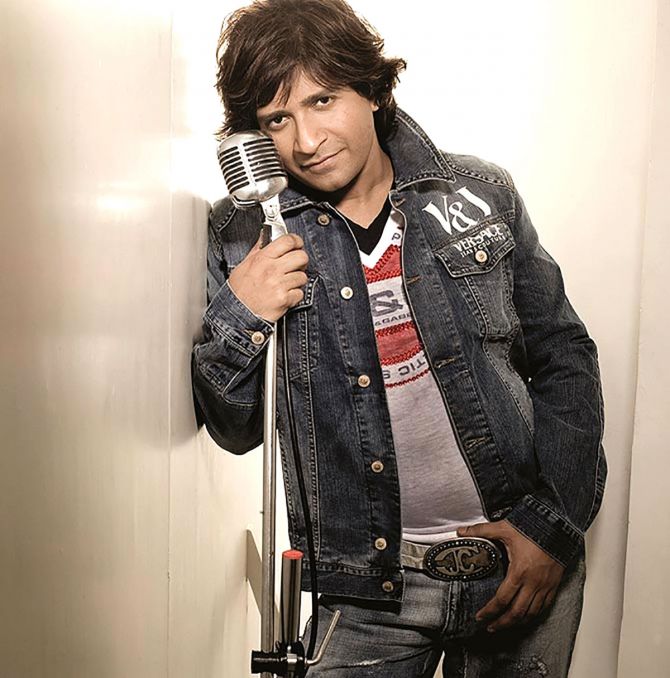 'I wanted to be a rocker; I never wanted to get into films'

After graduating, I got a job in marketing in Delhi because I was in love and wanted to get married. No one gives you their daughter unless you have a job.

I quit after six months, but I was married by then.

I have known my wife Jyothi since we were in sixth grade.

My wife supported me.

She sensed that I was not happy.

When I told my father, I had quit my job, he said, 'It's your life, son. If you think you have to pursue music, then it has to be it.'

I was scared, but his response boosted my confidence. I was very happy that my father stood by me.

I had done scratches for jingles while in college but after I quit my job, I started doing jingles seriously.

I started making money too.

In 1994, my wife was expecting and she went to live with her grandmother in Mumbai for her delivery.

I joined her a few days later.

I had no intention of staying in Mumbai because I was doing well with jingles in Delhi.

My wife insisted that I try to make a music career in Mumbai.

But I wanted to be a rocker; I never wanted to get into films.

I had a cassette recording of two English songs sung by me. I went with it to all the music companies.

Everybody said very nice but they also said rock music doesn't work here, especially if it is English.

Nothing happened for four months.

I had met Hariharan at a hotel in Delhi and he had asked me to come to Mumbai. My uncle is his friend and he took me to meet Hariharan.

He heard my cassette and played it for Leslie Lewis over the phone.

Lewis told me to meet him.

I met him at his studio and got my first jingle in Mumbai the day my son was born.

He gave me more work and I started doing jingles here.

Playback singing happened because of Vishal Bhardwaj. He gave me a song in the serial Hit Thi Hit Hai.

When he got to do music for Gulzarsaab's Maachis in 1996, I did the opening for the song in a high pitched voice, Chhod Aayein Hum Woh Galiyaan.

Gulzar loved it and said he would play the song in the beginning as well as at the end.

He told me I had a soulful voice.

In 1996, I got Sapney. I did a song called Strawberry Aankhen for A R Rahman.

Unfortunately, those films were never made, like Shekhar Kapur's Tara Rum Pum. I had three songs in that.

I thought of taking a break from playback to concentrate on advertising because it was good money and took little time.

That year, I also cut my first album, Pal.

It was becoming monotonous and I went underground for a bit.

I refused a lot of songs.

'People compare me to Kishore Kumar, but I can't match that genius'

In my early years, I would see how Kishore Kumar sings a song, how he emotes, and try to imbibe that. I liked his antics, style and delivery.

When you sing, you have to be in the song. You have to feel it or else, don't do the song.

That's why I haven't delivered a bad song in my career.

I have taken fewer songs to give quality work; I like to give my best.

I enjoy singing live because you get to interact with your audience; it's a special feeling.

Sometimes it feels spiritual when you sing to a live audience.

Singing live happens only when you have hit songs in the film, so stage and playback singing for a film are interconnected.

When you are singing in the studio, you give your best.

Keep your problems aside, give your hundred per cent, feel the song, get into the mood.

When you are performing the same song on the stage, you often feel different.

I don't necessarily sing exactly the same way on stage.

The way of delivering the song may change dramatically.

In 2008, I sang and composed the music for my album, Humsafar.

I haven't thought about composing for films. I don't want to do it for the sake of it.

For any song, I need to have mental preparation of at least two days. I don't go if anyone calls and says, 'Ek gaana hain, aakar gao (There's this song, come and sing it).'

'Singers are not paid well in India'

Singers are not paid well here, if you compare with international standards.

We are trying to find a way through a singers' association in terms of getting royalties.

Abroad, there is a band called Baltimora. They have had a hit called Tarzan Boys, and they are covered for life because the royalty keeps them going.

In India, you would have got a pittance for the song and you wouldn't get anything at all after that.

When a song plays for posterity, the singer, writer, music director, everybody should get money out of it.

We singers have another way of earning and that is through concerts.

The money we get for one song in a film is hardly anything. Depending on the singer, it can be around Rs 1.5 lakh to Rs 3 lakh.

If a singer has five songs in a movie, he will charge lesser.

But nowadays, one singer does not sing for the whole movie or the same hero in the same movie. There are at least four singers per film album, so that the listener gets more variety from a single album.

My favourite singers in the current generation are Benny Dayal and Arijit Singh. Their voices are different and they sing from within.

Among the women, I like Shalmali Kholgade and Niti Mohan. Both are versatile, young and raring to go.

I can't pick one from the current composers.

Everybody has a different talent.

Pritam has the maximum hits. He has given me some of my best songs.

Vishal-Shekhar are also hit-makers. I have got my best songs from them too.

In fact, all the composers -- whether it is Shankar-Eshaan Loy or Mithoon -- have contributed to my career.

This interview was first published in May 2014.