News
Business
Movies
Sports
Cricket
Get Ahead
Money Tips
Shopping
Sign in  |  Create a Rediffmail account
Rediff.com  » Movies » 'We will make a lot of money with Baahubali 2'

'The presenters make the money -- the ones who put their hard work, blood and sweat don’t always make money.'

Baahubali: The Conclusion is all set to break new records. IMAGE: Prabas and Rana Daggubati at the trailer launch of Baahubali: The Conclusion. Photograph: Pradeep Bandekar

Baahubali: The Conclusion will be bigger and better than the first, promises director SS Rajamouli.

The trailer launch of the film was held in Mumbai, and it's key players -- Rajamouli, actors Prabas and Rana Daggubati, presenter Karan Johar and producer Shobu Yarlagadda -- made sure to attend. But the heroines Tamannah Bhatia and Anushka Shetty were sorely missed.

"We spilt the film into two because the story was long," Rajamouli explains at the event. "It was not an idea to start a franchise but the world of Baahubali will continue in comics, a TV series and novels. We have upped the effects and action sequences, the story is not re-touched."

A few weeks before it releases on April 28, audiences will get a chance to watch the first part and refresh their memories.

"We plan to release the first part one or two weeks before Part 2, so that people get back into the narrative," Rajamouli says.

Prabhas, who plays the title role, says, "My friends and family are happy. Some of them had tears when they watched the trailer. I should thank Rajamouli and Karan for giving me this film." "The kind of goose bumps the Shivalinga scene (when Prabhas was introduced in the first film) gave, I wanted that reaction in Baahubali 2 too. Hence, the introduction scene on an elephant," Rajamouli says.

Rana Daggubati, who plays the antagonist Bhalladeva, says his bulky frame in the film was all real. "Nothing was computer generated. We worked for this for five years," he says.

What kind of box office collections were they thinking about this time around? Producer Shobu Yarlagadda claims they hadn't made any money with the first part. "We will make a lot of money with the second one. The cumulative budget of both films is around Rs 400-450 crores," he says.

Karan Johar, who is presenting the Hindi version of the film, joked that the presenters made all the money!

"The presenters make the money -- the ones who put their hard work, blood and sweat don’t always make money," Karan says.

Will Bollywood ever make a grand film like this? "Yes, it's just that we haven't done it yet," Karan replies. "There are many young directors in my company itself, who have been inspired by this film." What do Karan and Rajamouli have to say about the attacks on one of their own, Sanjay Leela Bhansali, whose film Padmavati is reeling under losses, thanks to frequents attacks on its sets? "It is deeply saddening to me as a filmmaker, as a human being and as a citizen of our prestigious and wonderful country that we have to endure something like this. All my support, thoughts and ideologies are with Sanjay," Karan replies.

"Every time I read something like this, it saddens me. We, at our own level at the producer’s guild, are with Sanjay and his cast and crew. We hope adequate measures can be taken to ensure something like this never happens to another filmmaker again," he continues.

The evening wouldn't have been complete without a question on Karan's twin babies. "I am doing well and the babies are fine too," he replies. 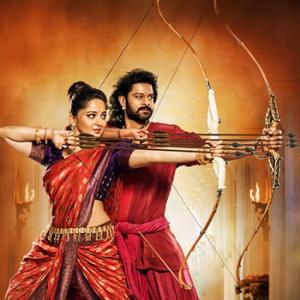