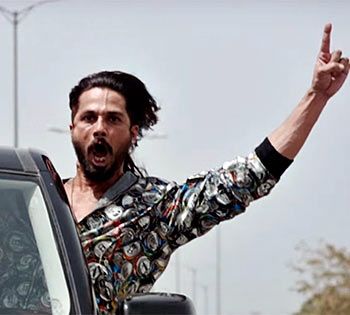 'What is the guarantee that someone who comes in will not interpret the existing Cinematograph Act and the law in the same way? The whole system needs an overhaul, and we, as an industry, should fight for it.'

The Udta Punjab team reacts to the court verdict.

"We were worried and scared. But we decided to take this journey, and the verdict has been fantastic for us!" Vikas Bahl, one of the producers of controversy-ridden film Udta Punjab exclaimed at a press conference in Mumbai.

Starring Shahid Kapoor, Kareena Kapoor Khan, Alia Bhatt and Diljit Dosanjh, the film deals with drug abuse in Punjab, and was faced with as many as 89 cuts initially when it went to the Censor Board.

The producers went to court, and the High Court cleared the film with a single cut and a revised disclaimer.

While Censor Board Pahlaj Nihalani accepted the verdict practically, the Udta Punjab team celebrated the win, calling it a 'landmark judgement.'

"We want to thank the court but at the same time, with this verdict and its freedom comes responsibility," Bahl continued. "It is now on our shoulders to do the right thing, so that this verdict stays with us forever."

While Vikas narrated how director Abhishek Chaubey did not sleep in the last few days leading to the verdict, Chaubey himself chose to keep his silence through the one-hour press conference.

The Haryana and Punjab governments have managed to get a stay on the film's release on June 17, but Shahid Kapoor says he's not aware of that detail.

"I am very happy (about the verdict). I respect the court's decision. I appreciate the cut that was made, although that is my personal point of view. I would wanted this film to pass without any cuts and the shot that has been asked to cut is mine. But I think it is right -- we have the freedom to express ourselves but we have to responsible. So it's a nice balance."

Shahid was referring to the scene where his character Tommy Singh urinates into a crowd.

Punjabi actor Diljit Dosanjh makes his foray into Bollywood with this film, and he said he was happy with the support the film got.

Alia Bhatt said that she had chosen not to speak about the controversy earlierbecause her words might get misinterpreted. "But my personal and naïve response to the whole thing is when I heard about the suggested cut, I asked my father, 'But why? It doesn't make sense.' My father has been fighting this issue for a long time. He told me that if something like this happens, go fight it in court andyou will come out feeling happy."

Producer Anurag Kashyap, who has been at the helm of the whole controversy, spoke about the other films that were also stuck at the CBFC. "The battle is far from over. It is over for Udta Punjab, yes. We fought and there was such an amazing support from (co-producer) Ekta Kapoor, (his production company) Phantom Films, distributors, and from the media. Some people doubted our intentions and said we are doing it for publicity, others said we have political affiliations, we were trolled because we believed in something. I don’t think I did anything alone. Yes, the voice may have been mine but everybody was behind me. I have never seen this kind of support before.

"A lot of smaller films are facing problems from the CBFC like Guneet Monga's Haramkhor. We need to change the system. Mr (Arun) Jaitley has made a statement in that regard, and made us believe that it will happen soon. We hope it will happen this month," he added.

Would he want Censor Board chief Pahlaj Nihalani to be sacked?

"We have a humongous problem with Mr Nihalani but if he goes, who will come in?" Kashyap asked in response. "What is the guarantee that someone who comes in will not interpret the existing Cinematograph Act and the law in the same way? The whole system needs an overhaul, and we, as an industry, should fight for it."

"Two days ago, we were worried that the film would not release at all," Shahid said. "People, who did not want this film to release, have helped it become larger."

Nihalani himself has made movies that has contained abusive language; what did Anurag think about that?

"If I have an issue with a film, I will not go and watch it. I have seenAankhenandShola Shabnamwhen I was in college and had fun. I have been Govinda’s fan, so I am not going to judge. Whatever argument I have is on a personal level. Both of us have the right to release our films. Nihalani's films were watched by the masses. It must have entertained people, that’s why they were made in the first place. Why should I sit and retrospect and become superior?"

The film has been cleared with an 'A' certificate. Is Anurag happy with that?

"When I look at my 15-year old daughter, I think she is much more matured then I was at 20. Even the honourable judge said that today's kids are smarter because this is the age of information. They have more access because of the internet. But it is up to the psychologist or the psychiatrist, I don’t know whose job it is to decide that this is the age when people can think for themselves. It actually needs more research."