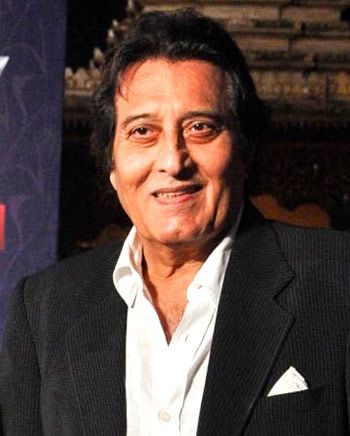 Veteran Bollywood actor Vinod Khanna passed away at the Sir H N Reliance Foundation and Research Centre in Mumbai this morning. He was suffering from cancer.

The hospital authorities refused to comment on his demise.

The actor, who turned 70 on October 6, was admitted to the hospital on March 31.

At the time, pictures of a frail and emaciated Khanna had gone viral, sparking concerns about his health. His family issued a statement that he was being treated for severe dehydration.

Born into a Punjabi family to Kamla and Kishanchand Khanna in Peshawar, Khanna studied commerce at Mumbai's Sydenham College before moving into acting.

Khanna was married to Geetanjali between 1971 and 1985 and has two sons with her, Rahul Khanna and Akshaye Khanna. He married Kavita with whom he has two children, Sakshi and Shraddha.

Vinod Khanna appeared in 141 films between 1968 and 2013 and also forayed into politics by joining the BJP. He was Minister of State for Tourism and Culture in 2002.

He might have made his debut as a villain in Sunil Dutt’s 1968 film Man Ka Meet, but later started playing lead roles. The film, which was made to launch Sunil Dutt's brother Som, helped make Vinod the cynosure of all eyes. Within weeks of the release of the film, more than a dozen producers lined up outside his house to sign him.

His first break as the solo lead hero came in Hum Tum Aur Woh in 1971.

He gave up a flourishing career to join Osho in 1982. Five years later, he returned to the industry and re-built his career.

The actor received a Filmfare Lifetime Achievement Award in 1999 for his contribution to the film industry for over three decades.

In 1997, he joined the BJP and had been a four-time MP representing Gurdaspur in Punjab. He had served as Union minister for cultural affairs and tourism and minister of state for external affairs.

The funeral will reportedly be held this evening.