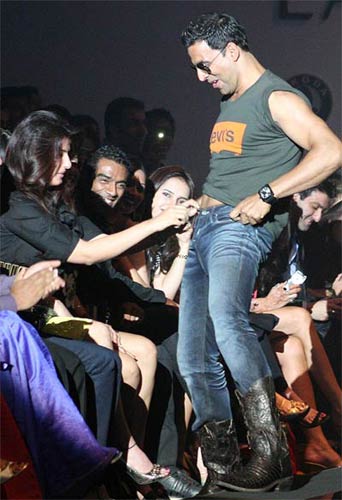 Actor Akshay Kumar's wife Twinkle was arrested by police six days after a case was registered against the couple for allegedly indulging in an obscene act during a fashion show, but the actress was released on bail.

Twinkle went to Vakola police station with a lawyer last night and surrendered. Police arrested her but she was immediately released on a bail bond of Rs 950.

She told police that Akshay was abroad on a professional assignment and would come to the police station to surrender as soon as he returns next week.

The duo and organisers of the fashion show have been booked under section 294 IPC (obscene act and songs), police said. Since it is a bailable offence, Twinkle was released by police immediately. Police said it would file a chargesheet in a court which will decide whether to frame charges against the accused or not.

In case the charges are framed, they would face the trial, police said. Akshay was walking down the ramp at Lakme Fashion show last week when he suddenly stopped in front of his wife who was seated in the front row and asked her to unbutton his jeans. Anil Nair, city-based social activist, had registered a police complaint against Akshay, wife Twinkle and the organisers on obscenity charges.