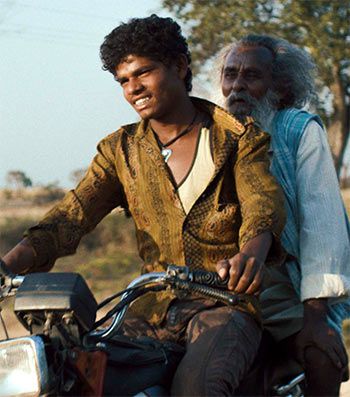 In his first full-length feature itself, Raam Reddy seems to have mastered something that’s most difficult to master in cinema: a way of suggesting a dreamlike clarity in a brazen setting, says Sreehari Nair.

Thithi is, in the true sense of the term, a carnal comedy.

It takes place in a land where incest is narrated like dew-drop poetry, where people unknowingly and unwittingly end up consuming the same animals they once petted and hugged, and where the half-finished sentences of human beings are completed by the wavering cries of goats.

The characters in Thithi are all hedging and bluffing just a little bit, whether in a game of marbles or in the bigger game of life, and everyone’s just a little pathetic and just a little tender.

The unsettling rhythm of the movie is its true charm and by the end, we may find ourselves to be in a state of both delight and wooziness.

The director Raam Reddy has dropped a set of Japanese Paper Balls all across the barren landscape of Nodekoppalu in Karnataka and we are left to watch in awe, as these paper balls, miraculously bloom into marvellous flowers.

At its core, this is an unabashedly small-town movie with a plotline mounted like a rural cover-story: A 101 year-old man has died after living an eventful life.

In the south, they say, there’s nothing sad about an old man dying -- let alone a 101 year-old man -- and that’s precisely how Gowda’s son, grandson and great-grandson take to the news.

For the villagers, however, the death of the amoralist and the sensualist ‘Century Gowda’ represents a different kind of passing -- it’s the passing of an age, of an era.

For, Gowda is to the villagers, less of a real person and more of a mythical creature from the past -- somebody who had defeated both death and, the general human desire for a neat, civilised life.

After he slumps down at the end of the opening scene, we see Century Gowda majorly on the obituary hoardings, but we know what he represents: those primal, old men who are circulatory, digestive and sexual -- and men who are loved and respected for being exactly all that.

In the sterile landscape of Nodekoppalu, with only a few flashes of greenery and fewer electric and telephone poles, the story of Gowda’s death is carried unobstructed by the dry air and it culminates in a lavish 11th day death ritual, the name of which gives the movie its title.

The demise is also a unifying factor, as it brings together, for practical purposes, the three generation of Gowda’s sons.

The grandson Thamanna wants to sell off Century Gowda’s five-acre property and for that he needs either his father Gadappa’s absolute consent or his certain death and when he can’t achieve either, he sends his father away and asks him to stay low.

Thamanna is also engaged in a battle of masculine wits with his son Abhi -- who has a penchant for turning tiny conversations into romantic interludes and a talent for ecological destruction: when he is not sand-mining, he’s chopping away at the trees.

Cinematographer Doron Tempert deliberately sets up the vast emptiness at the centre of Thithi to resemble the Westerns. But Reddy knows the art of adding light touches and because he is such an efficient gagster-artist, he inverts genre tropes effortlessly.

The Western vibe maybe incidental, but when Raam Reddy adds to that vibe a jocular spirit, it takes on the colour of a Revisionist Western; a vaudeville of a Western.

So the women are not little decorations here, dwarfed by the men; they are the real rulers.

The kitchen is where the joy, the bustle and the strategising happen and the men-folk are just going through the motions. Men live for the moment and the women, for tomorrow. Men bark, snarl and pass out. Women pass down stories.

Reddy doesn’t borrow the patronising eyes with which Anusha Rizvi had viewed her characters in Peepli Live. Through his eyes, we don’t see the villagers as a dispossessed or cheated lot or his female characters as a set of moaners in search of freedom.

The women in Thithi are all evolved to the textures of the day and their strategies for survival are better mapped-out than their male counterparts.

After Abhi, the great-grandson, sleeps with his girl, she walks out still trembling from the experience but stops to say: Find me and marry me. The things in these women that make them strong are also the things that make them beautiful.

The ideologies of the village, as a whole, are in a state of flux, and nobody except the bearded Gadappa seems to ‘get’ the pulse of the moment. And he ‘gets’ the moment only because he can’t tell one moment from another; he is just walking, from ‘some place’ to ‘some place else’.

At one point, someone enquires about his nativity and the bearded man replies: I am from the village I came from.

In a land where relationships have evaporated in the face of convenience, Gadappa is a ‘Man from Nowhere’ and he means bad to no one -- especially not to those who would play a little board-game he has personally invented.

We are used to comedies based in the heartlands before, but these were comedies that paused to show us the sadness that lay beneath the jesting. The directors of these movies were city-bred and it was mandatory for them to stop and parade their concerns; they churned out films that seemed to suddenly turn ‘wistful’ with intertitles explaining the change in tone.

Thithi is a rare cinematic achievement in which the melancholy in the air and the humour of everyday life comes fused. A Renoir-like simplicity lifts the scenes, and a Joycean wit carries them into unexpected dimensions.

When Abhi is watching morphed pictures of women on his mobile phone, there is his father Thamanna, very unintentionally, asking a motor technician to buy ‘Foreign Parts’ and not ‘Local Parts’ -- shifting Abhi slightly, in his place.

When Century Gowda’s post-cremation remains are gathered, someone says: Here are some ‘nice ribs.’

When Gadappa refuses to take his shirt off during his father’s cremation, an old guard muses about the 80-something Gadappa: Sons these days have no respect.

Everybody has a makeshift profession and everyone’s more scared of their near-and-dear ones than ‘that person on the street.’ It’s a world where people may look at their own family with deep caution but have no trouble spilling their guts out to strangers.

What the non-professional cast gives to the movie is not just a sense of rawness but also a sense of geography; we haven’t seen these actors anywhere before, and we don’t know where else they would fit.

Channegowda who plays Gadappa has the face of a monk, but also the physicality of a satyr; what part of him is human and what part is not, we never quite know.

Abhishek who plays the great-grandson Abhi has a vibrating physical sensitivity, and while he is very much a ‘man of the present,’ he also inherits something unique from his great-grandfather. The raunchiness has clearly skipped two generations but Abhi embraces the legacy wholeheartedly -- his great-grandfather’s foul mouth is his polite smile.

Raam Reddy is an obsessed stylist, a director to whom the shape of the scene is the story. Where he wants scenes to be stretched and when he needs rapid cuts is a matter of great concern to him. But his style also has a sense of purity and it never meddles with the narrative or the characters.

Everything about Thithi is so natural and so alive that even the distracting anti-smoking ad at the start of the movie had become unbearable to me by the beginning of the post-intermission part. This is a piece of work meant to make us more disdainful of the artifice around us.

When you walk out of Thithi, you walk out with a feeling of having been completely inside its characters’ heads. You don’t stoop down to contrast their lives with yours. You realise that’s not the point.

In his first full-length feature itself, Raam Reddy seems to have mastered something that’s most difficult to master in cinema: a way of suggesting a dreamlike clarity in a brazen setting.

The people in Thithi are neither like my neighbours nor like the people from my hometown, but they are more like characters from a great novel that I had to take in wholly and unquestionably.

At the start, Gadappa expresses a disinterest in cremating his father but by the end he lights a little fire, possibly for himself or possibly as his personal Pagan ritual for the dead.

I think I heard some twigs break like little bones and saw small flames leap out like glowworms. This is an astonishing movie.