'There is pent-up demand for good films' The ministry of home affairs recently said it would permit cinema halls to operate at higher occupancy levels, adding that the enhancement would be made in revised guidelines.

Occupancy levels within theatres were earlier capped at 50 per cent in line with social distancing norms.

However, as the COVID-19 case load in the country reduces and the vaccine rollout progresses, multiplex operators say that movie halls can now accommodate more people.

"The economy has completely unlocked and things are slowly getting back to normal. In view of this, I think the cap on seating within theatres can be lifted. While the MHA has not specified revised occupancy levels yet, we are hoping it will be 75 per cent to begin with," Kunal Sawhney, senior vice-president, operations, Carnival Cinemas, said. Revised guidelines by the MHA are expected in the next two days, following which state governments will issue new standard operating procedures for theatres.

The new guidelines will be effective February, implying that March could be see seating capacity enhanced to 100 per cent, if the Centre and states are comfortable.

Also, theatres in Rajasthan and Jharkhand that were shut so far are also likely to reopen next month, exhibition industry sources said.

For Bollywood all of this spells good news, since big releases are assured of footfalls, a critical component of the movie business. 40 per cent of a movie's revenue comes from the box office, which is, in turn, dependent on footfalls and ticket price. Movies that could take off first include Akshay-Kumar-starrer Sooryavanshi and '83, featuring Ranveer Singh and Deepika Padukone, by March and April respectively.

"There is pent-up demand for good films. And there are 30 movies in Hindi that are ready for release, since they could not be launched due to the COVID-19 pandemic. So 2021 could be see the comeback of Bollywood and the film exhibition business," says Devang Sampat, chief executive officer, Cinepolis India, said.

Regional films have already responded positively to reopening of cinemas despite a cap of 50 per cent on occupancy.

Master, a Tamil-language film released on January 14 during Pongal, has been declared a hit, with box office collections pegged at Rs 200 crore (Rs 2 billion).

The success has prompted regional film-makers in the southern states to line-up new films in the coming months.

On the Hindi side, a handful of mostly small and mid-budget films have released so far, including Ramprasad Ki Tehrvi, Suraj Pe Mangal Bhari, Shakeela, Madam Chief Minister, and Indoo Ki Jawani.

Some other blockbusters include Maidaan, starring Ajay Devgn and Shahid Kapoor's Jersey.

But multiplexes earn more than half of India's theatrical revenues, putting the pressure on them to ensure that safety, hygiene and content standards are met.

While the average ticket price for multiplex operators is Rs 150-200, the first few months will see a 20-25 per cent discount to encourage visits.

Discounts are also expected on food and beverages, with bookings, check-in, and food ordering all going contactless as part of the standard operating procedures. 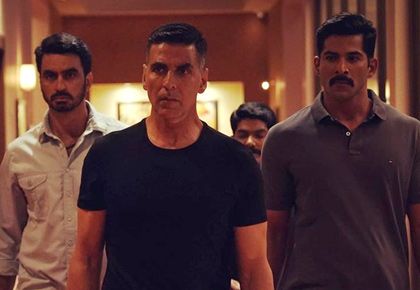