The Model Who Became A Spy

'If you perform well, if you do your best, it stays with the viewer. That's how you grow.' 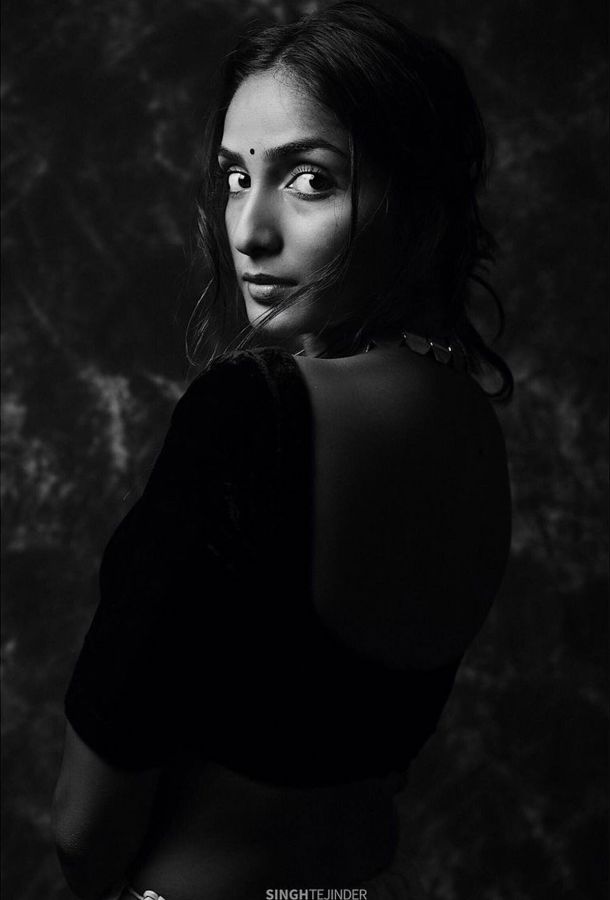 The camera zooms in on her large, beautiful eyes.

And Aishwarya Sushmita quietly lets them do the talking.

Combined with her expressive face, this young model-turned-actress has made an impressive impact as the sultry spy, Karishma, in Special Ops 1.5: The Himmat Story(streaming on Disney+ Hotstar).

Till then, she was only known as a popular ramp and lingerie model.

While her height and eyes may have got her the role in Neeraj Pandey's Web series, her acting chops have proved that she is here to stay.

And, if you think beauty cannot be jam-packed with brains, do read this interview where she speaks candidly with Rediff.com's Rajesh Karkera. 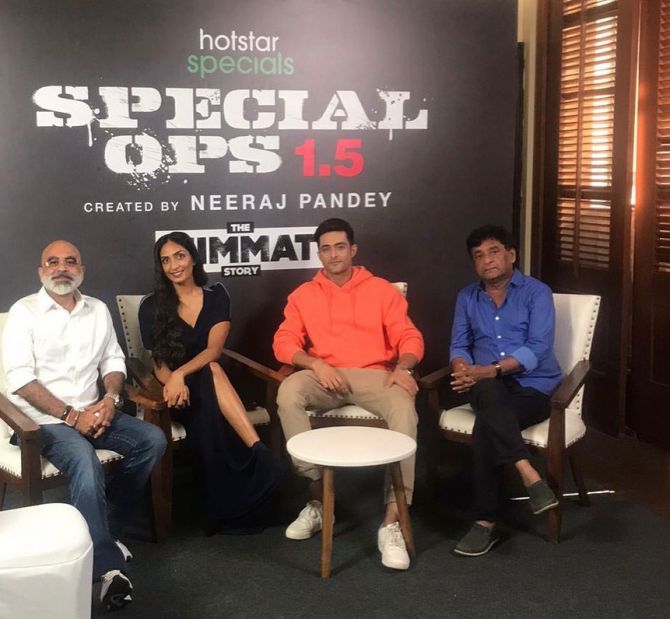 How did Karishma in Special Ops 1.5: The Himmat Story come to you? Did you audition for the role?

I was shooting for another project that is yet to release when I got a call from (casting directors) Shubham Gaur and Trishaan about the auditions for Special Ops 1.5.

I was definitely not going to let go of an opportunity to work with Neeraj Pandey; I had been waiting for it for a really long time.

My audition was just two lines!

You can imagine how thrilled I was the next day when I got a call saying Sir (Neeraj Pandey) really liked the whole look; it was what they were looking for. He especially liked my eyes and my height. That, I realised later, was important because the other cast members -- like Kay Kay Menon, Aftab Shivdasani, and Adil Khan -- are tall people.

They also wanted someone who had expressive eyes and an expressive face because Karishma (Aishwarya's character in the Web series) has fewer dialogues (as compared to the rest of the main cast).

I only realised I would be playing a honeytrap, a sparrow (a female spy who uses sexual wiles to get information) when I met Neeraj Sir.

It was a very interesting role. Besides, I couldn't get a better opportunity to work with Neeraj Sir, to learn from him. 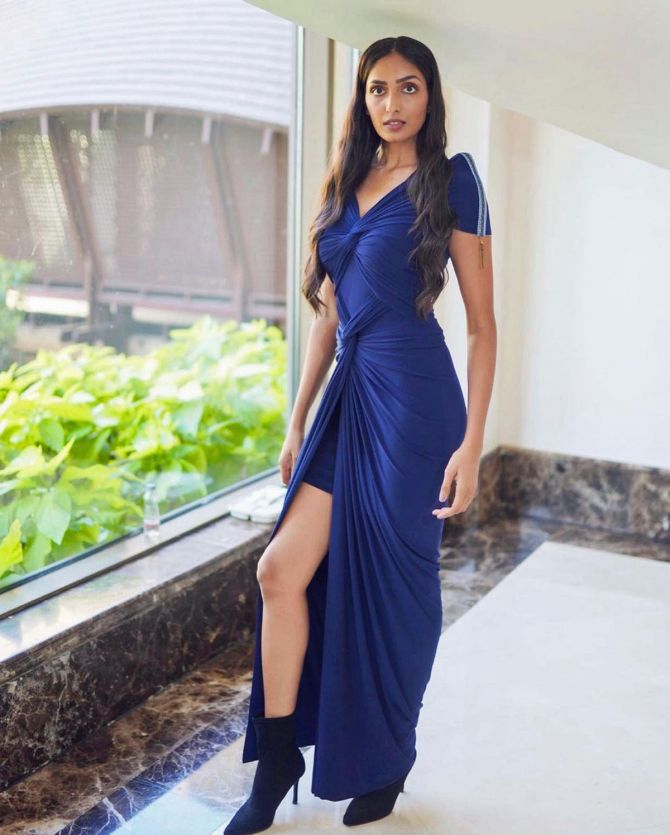 IMAGE: Posing for the media after the media interaction in a Shantanu Nikhil outfit. Photograph: Kind courtesy Aishwarya Sushmita/Instagram

You were ready to take the role despite its narrative arc in the series. You had no hesitation whatsoever?

To be honest, I have been getting a lot of offers to play different kinds of characters but, unless I connect with it, it doesn't make sense to go ahead.

With this script, I really felt that. It was so well-written, so graceful, so elegant. Even though Karishma is a honeytrap, there was nothing in the script that I thought was absurd or something I would not like to do on screen.

Also, I have been watching Neeraj Sir's work since A Wednesday. His writing is so beautiful. He is so clear, and so particular, about what he wants to portray to the audience.

There's no sleaziness, nothing that makes you, as an artiste, uncomfortable about what you are doing. I knew Special Ops 1.5 was going to be an amazing project.

I had complete faith in Neeraj Sir so, no, koi hesitation nahi tha(there was no hesitation). 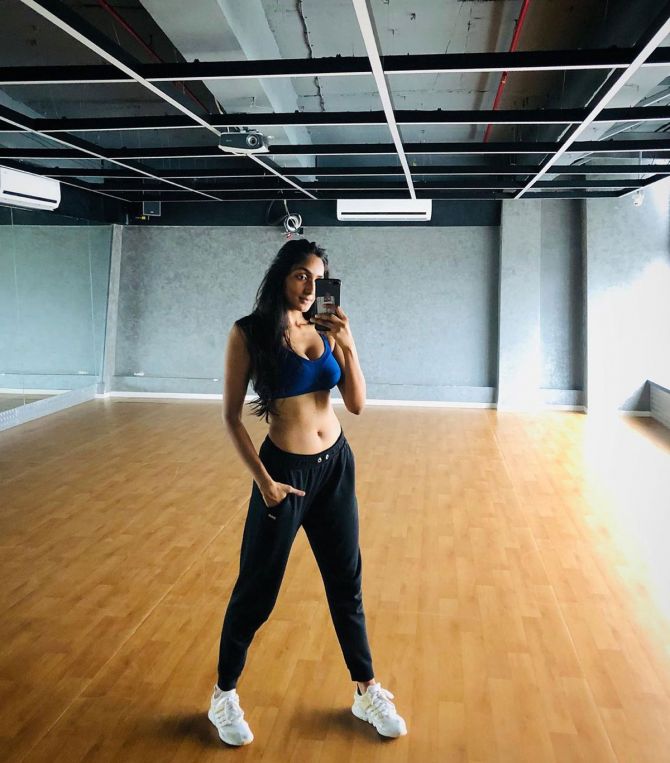 How did you prepare for the role? Did you read about honeytraps and spies? Did you take special acting lessons for this character?

One of the projects I am working on is Runway 43, directed by Mr Ajay Devgan. It's a small part, but a nice role.

I took it because, after the lockdown, I wanted to start acting; I didn't want to wait any longer.

Besides, getting to work with, and learn from, legends like Mr Devgan and Amitabh Sir is not an opportunity to be missed.

Before Runway 43, I did many acting workshops.

Like I went to Pondicherry for 15 days for an Adi Shakti Theatre workshop. Among other things, they teach you different styles of acting and masking techniques which really helped me perform in Special Ops.

If you've watched it, you'll know my role is more internal than external. There are a lot of sudden changes like crying and crumbling down and the Adi Shakti techniques really helped me there.

Even when I was only a model, I used to -- and still do -- workshops in Mumbai with (casting directors) Atul Mongia and Prashant Singh and (actor) Rachit Singh. 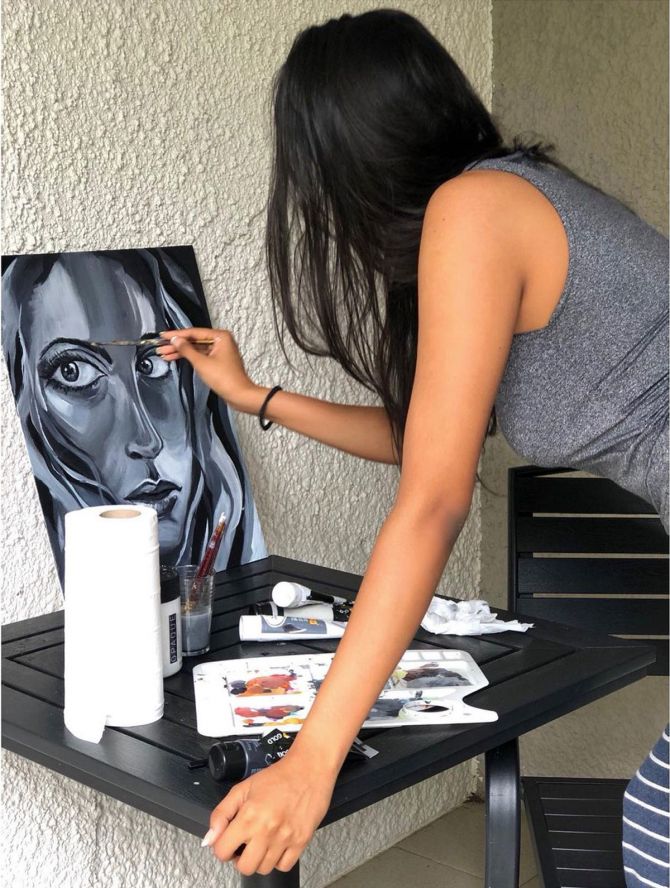 What was shooting with Kay Kay Menon and Aftab Shivdasani like? Did the presence of senior actors intimidate you?

On day 1, when we were traveling, I felt nervous about approaching them. I didn't know how they would react to a newcomer like me.

But Aftab was so much fun; he's very cool and friendly.

When I fell sick during the shoot, he was really kind -- he sent medicines and stuff.

Once I overcame my nervousness and spoke to Kay Kay Sir, it felt like we had known each other for a very long time; it felt like family.

I think it was the vibe they created. It was very healthy, very comfortable and so much fun. I never felt I could not perform; I never felt any hesitation or fear.

What brief did the (series's directors) Neeraj Pandey and Shivam Nair give you? Was it just to look alluring? What did they tell you about acting?

I didn't really get much time with Shivam Sir. We shot together for just two days in Mumbai.

The Mumbai schedule was handled by Shivam Sir; the shoot abroad by Neeraj Sir.

They didn't actually brief us before the shoot. While they would do rehearsals if needed, they are great believers in on-the-spot spontaneity.

It was a different experience for me to let things flow and just create whatever comes spontaneously. There is a certain exquisite beauty in that. 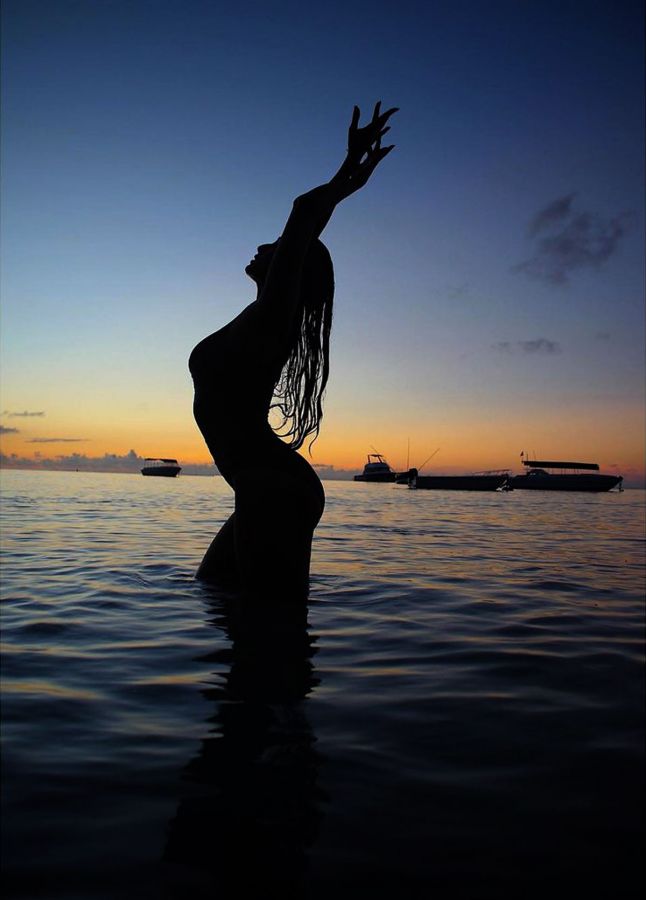 Let me tell you what happened recently.

I went to Patna for my cousin's wedding (before Special Ops 1.5 was released) and the way I was welcomed was overwhelming!

We are supposed to keep our projects confidential until they release so I thought they would not be aware of it.

But I was the one who was surprised with the grand welcome I got. And it was not just my family!

Of course, mom and dad were really happy. They are very proud of the way I have been constantly been working and growing.

All my friends and my modeling colleagues are happy for me.

When you get this kind of positivity from those around you, it's a huge boost. 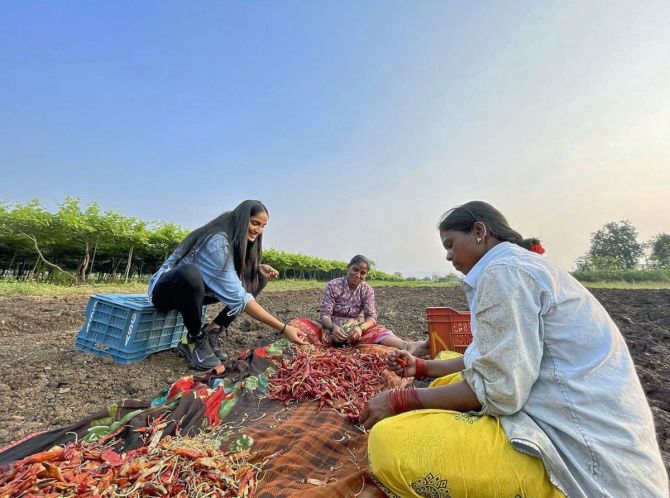 IMAGE: Aishwarya loves the outdoors, Being close to nature keeps her close to herself she says. Photograph: Kind courtesy Aishwarya Sushmita

Any role model in the acting business you would like to emulate and why?

Someone I really admire is this fashion model called Caitriona Balfe (seen in Outlander).

After a long career in modeling, she became an actress. She has starred in the Kenneth Branagh movie, Belfast, which is getting a lot of Oscar buzz.

People think models cannot act; she is proof to the contrary.

I really like how Priyanka (Chopra) has made a global name for herself. She is successful because of her hard work, dedication, and determination; she had no one to help her.

And there's Taapsee (Pannu). I like the career choices she is making and how she is putting aside normal considerations to do so. She has grown so much as a professional.

She did a small role in Neeraj Pandey's Baby and look where she is today.

These are the kind of people I look up to, am inspired by, and want to model myself on. 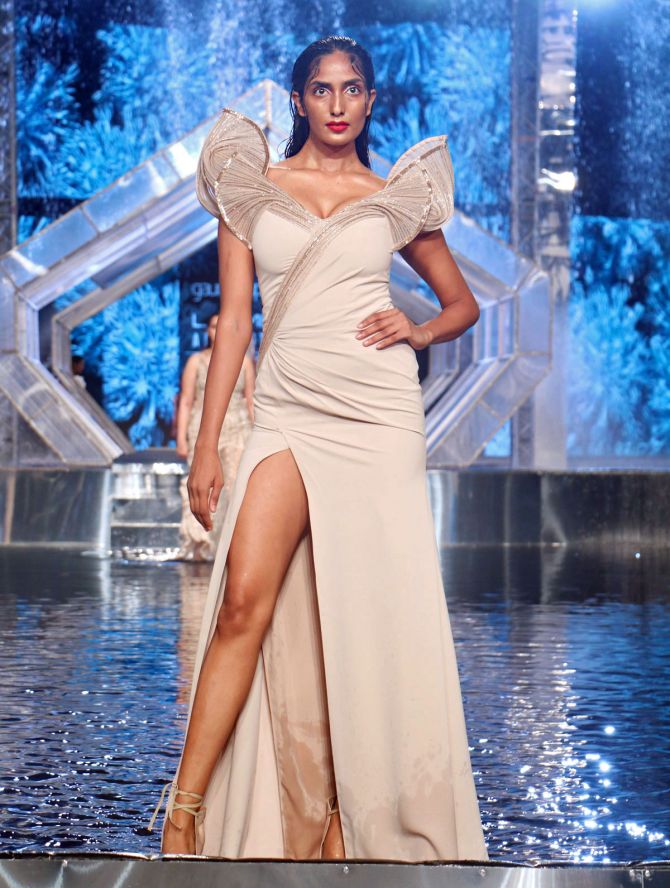 What kind of roles are you looking for? Do you think you could play the lead in a movie?

Playing the lead would be amazing! But I won't take on any role just to play the lead. For me, content is more important.

Cinema has changed compared to what it was earlier.

It suits someone like me, would rather do a role of substance; a role that makes an impact. The idea is to portray something that stays with people.

And roles can evolve.

For example, for Special Ops, I only signed a contract for five days,

But Neeraj Sir liked my performance on the first two days and my role, which was initially very small, started increasing. Eventually, I shot for 16 days.

Those kinds of miracles happen.

Have you watched Thappad? It has this character of a maid, who appears for just 5-10 minutes. But the actor performed so well and her presence is so impactful that I could not think of anybody but her when I watched the film.

If you perform well, if you do your best, it stays with the viewer. That's how you grow. 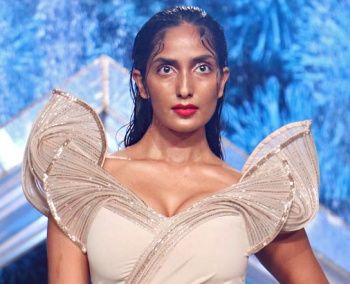