In the last decade, July has been quite lucky for Salman Khan and Ajay Devgn, who have scored three blockbusters each!

Joginder Tuteja looks at the biggest July hits in the last decade. The film didn't quite take a quick start, but word-of-mouth caught on and it made the weekend bountiful. The Shashank Khaitan directed film did well commercially despite a lot of criticism.

In fact, on satellite, it is one of the biggest hits as it caters to family audiences.

A year before Janhvi Kapoor made her debut, her mother Sridevi was seen in her last film, Mom.

Directed by Ravi Udyawar, this thriller reminded us of how good a performer Sridevi is.

Arjun Kapoor and Anil Kapoor's Mubaarakan released in the same month and though it netted more (Rs 55.29 crore), it wasn't a theatrical success. Sultan arrived in 2016 and the Ali Abbas Zafar directorial emerged an all time blockbuster.

The sports drama had a beautiful love story woven into the narrative with Anushka Sharma. It remains one of Salman and Kareena Kapoor's most successful films.

Baahubali: The Beginning released a week before this and entered the Rs 100 crore club. Salman's Kick was an instant blockbuster.

Producer Sajid Nadiadwala turned director with this masala film which had a lot of action.

The same month also saw the release of the other superhit, Ek Villain (with a collection of Rs 106 crore). Farhan Akhtar's biopic on Milkha Singh was a huge hit and one expected his acting career to really take off.

Surprisingly, neither did he make too many films nor did they turn out to be commercial successes, barring Wazir and Dil Dhadakne Do.

Director Rakeysh Omprakash Mehra was in great form and the same is expected from his next outing with Farhan, Toofan. Along with Rohit Shetty, he delivered a major success in the form of Bol Bachchan, co-starring Abhishek Bachchan in a double role of sorts.

An adaptation of the Amol Palekar and Utpal Dutt starrer Golmaal, Bol Bachchan was good fun.

Asin and Prachi Desai were the leading ladies. Singham, an official remake of the Surya starrer Singham, turned out to become a genre in itself.

The Rohit Shetty directed film surprisingly took a slow start, but once it took off, there was no looking back as it raced into the Rs 100 crore club.

Zindagi Na Milegi Dobara, which released in the same month, did net Rs 90.27 crore, but its overall run was impacted.

Once Upon a Time in Mumbaai, 2010
Box office collection: Rs 58 crore 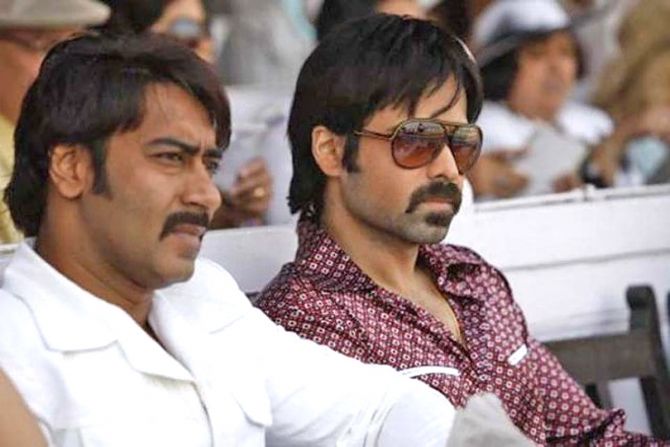 Sheer dialogue-baazi ruled Once Upon a Time in Mumbaai which brought Ajay Devgn and Emraan Hashmi together.

Incidentally, there was a time when it had seemed that the Milan Luthria directorial would not see the light of the day.

When it went over budget after completion of 50 percent of the shoot, there was a lot of uncertainty around it. Eventually, of course, it became a hit.