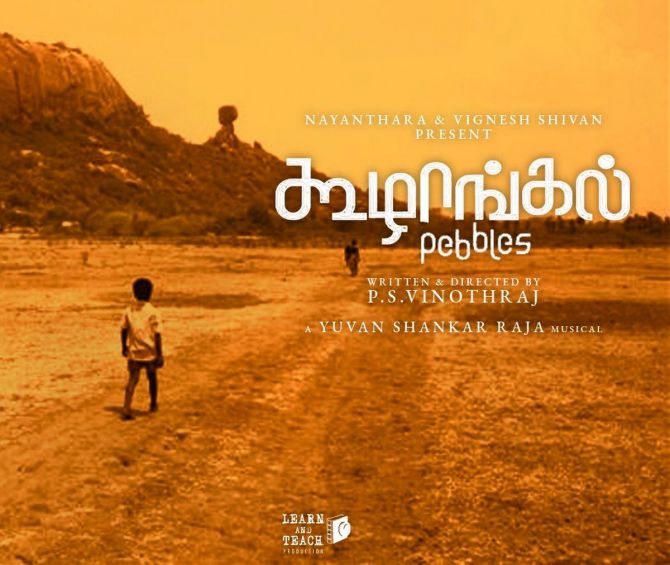 The movie follows an alcoholic abusive husband who, after his long-suffering wife runs off, sets out with his young son to find her and bring her back.

It stars newcomers -- Chellapandi and Karuththadaiyaan -- and is produced by Vignesh Shivan and Nayanthara.

"India's official entry for Oscars this year is Koozhangal. It was picked by a 15-member jury, headed by filmmaker Shaji N Karun, in a unanimous decision," Supran Sen, Secretary General, Film Federation of India, told PTI.

Shivan also took to Twitter and shared the news that the film will represent India at the Oscar's best international feature category.

"There's a chance to hear this! And the Oscars goes to... Two steps away from a dream come true moment in our lives... #Pebbles #Nayanthara @PsVinothraj @thisisysr @AmudhavanKar @Rowdy_Pictures Can't be prouder , happier & content," he posted on the microblogging site.

Vinothraj said he was grateful for all the love and support.

"Could not be more happier to receive this news," he tweeted.

Koozhangal had won the top honour, the Tiger Award for best film, at the 50th International Film Festival Rotterdam (IFFR), earlier this year.

Following the announcement, filmmaker Hansal Mehta sent his best wishes to the team behind Koozhangal.

"All the best to this little gem! What is important is that this film's onward journey gets solid support both strategic and financial or else these selections only remain a local cause for celebration," he tweeted.

Director Onir also congratulated the cast and crew and said he is looking forward to watch the film in theatre.

"Congratulations@PsVinothraj@VigneshShivN@AmudhavanKar. Looking forward to watching #Peebles in the theatres . Have heard so much good things about the film. Best wishes," he wrote.

The 94th Academy Awards are scheduled to take place on March 27, 2022 in Los Angeles.

The nominations will be announced on February 8, 2022.

The last Indian film that made it to the final five in the best international feature category was Ashutosh Gowariker's Aamir Khan-starrer Lagaan in 2001.