Tadap makes sure it reaches out to the youth, observes Joginder Tuteja. He is intense, shy, aggressive, romantic -- all rolled into one.

She is enticing, mysterious, coy, deceptive -- a lot that she has handles as a woman.

Between the duo, there is a spark that leads to fire.

It's just that when lightning strikes, a lot comes crashing down, only to reveal a lot from the rubble.

That's Tadap for you, a film by Milan Luthria, where the film-maker attempts an out and out intense love story, while making a picture that is an antithesis of his The Dirty Picture, which completed 10 years this week.

After making quite a few crime and gangster movies like Baadshaho and Once Upon A Time In Mumbaai, Milan gets into a different zone with Tadap, which is the launchpad for Ahan Shetty, who is seen with Tara Sutaria, who didn't have any dialogues in her 2019 release Marjaavaan.

If one's heart went out to Tara in Marjaavaan, another heart beats for her in Tadap where love kills!

Riding away to glory atop a bike, Ahan gets a hero launch in this Sajid Nadiadwala production.

Sajid has already given Bollywood a bonafide hero in Tiger Shroff who he launched in Heropanti.

With Tadap, Ahan gets a welcome in an angry young man avatar.

He kicks, punches and screams his lungs out, especially when he finds deception in love.

With the sound of Pritam's Tum Se Bhi Zyaada Tumhe Pyaar Kiya Hai in the background, he channelises his inner Kabir Singh and lets those around him know who his heart really beats for.

Dad Saurabh Shukla listens to it, and sympathises too.

It's a different matter though that in 1970s style drama where the hero's father emerges as a villain in such a scenario, Kumud Mishra has plans of his own.

What makes this Rajat Arora written film (an adaptation of the Telugu film RX 100) different is the fact that the motive around what translates on screen, especially in Ahan's character's life is something that brings a twist in the tale.

There are a lot of 'hows' and 'whys' that are asked, and while these make for an impression in the second half of the film, they do keep you engaged.

As actors, Ahan and Tara stay on with you.

Ahan carries his rugged look well for this film and takes good strides into the industry.

While this is a tale of passion, he would be quite an inclusion in an action film too.

Tara continues to grow well from her Student of the Year days and makes her presence count.

This is what Tadap does as a film. It makes its presence count amongst a series of films that are set to release in December.

The only film that launches a debutant in 2021, Tadap makes sure it reaches out to the youth. 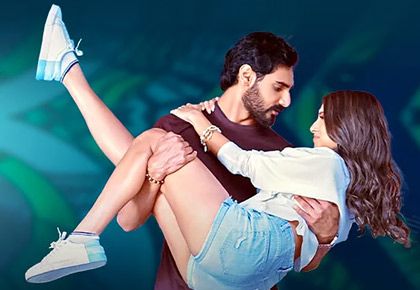