'Honour to be known as Amitabh Bachchan's voice'

'Today, when I look back, our journey together ajooba lagta hai.' It is an association that goes back to 1991, and has only grown stronger over the last three decades.

"Thirty-one years have passed since we first heard the Hum chartbuster, but even today, I just have to walk on stage and audiences all over the world are screaming, "Arre O Jumma, Meri Jaaneman..." Sudesh Bhosle tells Rediff.com Senior Contributor Roshmila Bhattacharya. The first song I sang for Amitabh Bachchan was Ya Ali Ya Ali, Mera Naam Hai Ali.

It was the composer duo, Laxmikant-Pyarelal, who gave me my big break as a playback singer.

By then, I was doing a number of shows every month with the popular band, Melody Makers, mimicking Sunil Dutt, Vinod Khanna, Sachin Dev Burman and even daring to imitate Amitabh Bachchan's famous baritone.

At the recording studio, Laxmikantji (Laxmikant of the composer duo Laxmikant-Pyarelal) told Shashi Kapoor, the producer and director of Ajooba, 'This boy imitates Amitji well.'

They loved the way I sang Ya Ali, Ya Ali and, to my delight, offered me another song, this one with Mohammad Aziz, Arre Tajub Hai, Tune Pyar Nahin Kiya.

When Amitji heard my voice, he asked, 'Kaun hai yeh? (Who is this?)'

I was called to Film City studio in Mumbai and introduced to him by Shashi Kapoor.

It was my first meeting with the Amitabh Bachchan and in response to my shy, 'Sir namaste', he replied with a twinkle in his eye, 'Hamari aur aapki awaaz bahut milti jhulti hai, mujhe toh pata hi nahi chala yeh gaana maine kab gaya (Our voices are remarkably similar, I have no idea when I sang this song).'

It was a hat-trick for me when I landed a third song, O Mera Jaan-E-Bahar Aa Gaya, with Mohammad Aziz, Alka Yagnik and Anuradha Paudwal.

Jumma Chumma in fits and starts 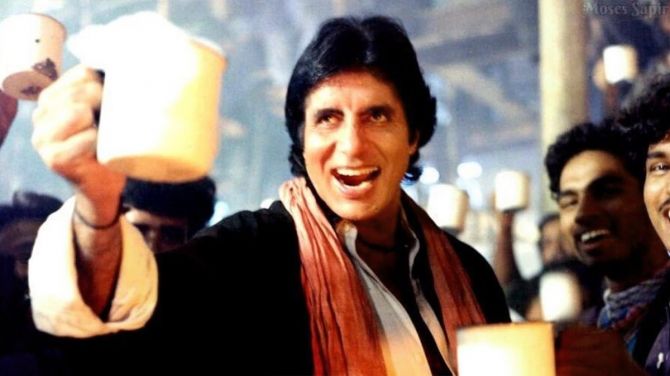 Soon after, Laxmikantji called me and asked me to sing a few lines he had written, Arre O Jumma, Meri Jaaneman, Bahar Nikal, Aaj Jumma Hai...

I complied and left.

After that, Bachchansaab was invited to Laxmiji's music room and I was asked to sing the mukhda before him with only a few musicians in attendance.

I sang it without a microphone.

'Very good, gaana record kar lo,' he complimented after I had finished.

It was only after this that Anand Bakshi went on to write the antara.

After he had penned the song, we took it to Mehboob Studio for the recording.

This time I had company, in Kavita Krishnamurthy, my co-singer, and 80 musicians playing live.

Amitji was also there, observing me intently.

He came to the studio at 9 am and left only after we were done, at 2 am.

At one point, I was so intimidated by his presence that I told Laxmiji that I couldn't sing before him, not in his voice!

Laxmiji gently told me to sing a few lines in my own voice, then got me to repeat them in Amitji's famous baritone.

He quietly recorded the second take.

This continued and he cleverly recorded the entire song.

Rs 100 as a token of appreciation 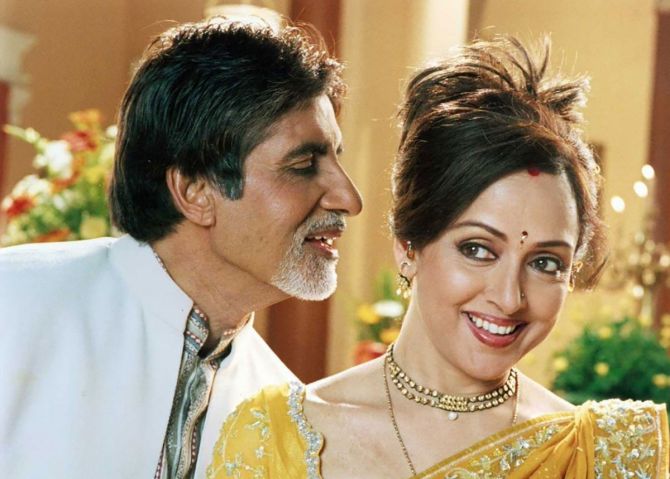 IMAGE: Amitabh Bachchan and Hema Malini in the song Meri Makhna from Baghban.

After that, Amitji wanted me to sing all his songs.

Before Hum, there was Ganpati Apne Gaon Chale in Agneepath.

When I was dubbing Shava Shava for Kabhi Khushi Kabhie Gham, Amitji arrived at the studio at 2 am.

Reminding me that it was a happy song, he said, 'You know what expressions I want in your voice.'

It amazes me how dedicated he is, involved in every department.

He attended all the writing sessions, music sittings and song recordings.

During Meri Makhna he was not in town, so he sent Jayaji (wife Jaya Bachchan) and (son) Abhishek to the studio.

Ravi Chopra, the director of Baghban, was constantly urging me during the recording, 'Sudesh, think you are singing for your wife.'

After the recording, Jayaji told me, 'Bahut achcha gaaya tumne (You sang very well)' and gave me Rs 100 as a token of appreciation.

Abhishek asserted that it was the best song I had sung for his Pa. He is not just an established singer, he also plays different musical instruments and has turned composer too.

I sang for him in the Bhojpuri film Ganga Devi, which his make-up man, Deepak Sawant, produced.

I also dub his ads and public service campaigns.

While he dubs his ads in Hindi, I am Amitji's voice in all the other Indian languages.

During the pandemic, when we were locked up in our homes with studios shut and concerts not happening, it was these that kept my house running.

Some years ago, singers had been dubbing ads for tobacco and liquor in his voice.

Furious and upset, Amitji threatened to patent his voice and sue anyone misusing it.

When some media persons pointed out that I was dubbing in his voice too, he brushed them off saying, 'Uski baat alag hai (He is different).' In the '80s, I began to accompany Amitji on concerts to the US, UK, Canada, Dubai and across India.

I did not stand backstage or sing in the wings while he lip-synced.

He called me on stage, made me stand beside him and sing with him.

When my wife, Hema, came up with the idea of a musical concert Amitabh Aur Main, under Melody Makers and our home banner Shree Kamakshi Arts, he was quick to give us his blessings and endorse the project.

Hema plays the piano while I sing chartbusters like O Sathi Re and Dilbar Mere Kab Tak Mujhe.

Along with my songs, there are popular hits by Kishore Kumar, Mukesh and Pancham (composer R D Burman) from Amitji's films.

My son Siddhant, who has flagged off his own journey as a playback singer with his blessings, also sings some of Amitji's songs in his own voice, like Main Hoon Don, and duets like Pyaar Hume Kis Mod Pe Le Aaya (Satte Pe Satta), Kajra Re (Bunty Aur Babli) and Sona Sona (Major Saab), Shava Shava (Kabhi Khushi Kabhie Gham) and Jumma Chumma(Hum).

Thirty-one years have passed since we first heard the Hum chartbuster, but even today, I just have to walk on stage and audiences all over the world are screaming, Arre O Jumma, Meri Jaaneman...

My daughter Shruti designs the sets and costumes and manages the event.

The response is always phenomenal! Today, it is a great honour for me to be known as Amitabh Bachchan's voice.

At shows and concerts, 70 per cent of the songs I sing are in his famous baritone.

However, the bigger thrill is that since the last 15 years, every year on my birthday, July 1, the first message is always from Amitji.

If ever I send him a text, wanting to chat, within two minutes, he is on the line, asking, 'Haan Sudesh, kya kehna tha? (Yes, Sudesh what do you want to tell me?)'

When I started a recording studio at our residence, Amitji was the one who inaugurated it, in the presence of my mother Suman, Hema, Siddhant and Shruti.

He has just turned 80 and when I look back on our journey together, ajooba sa lagta hai.

It seems like a miracle which leaves me speechless! 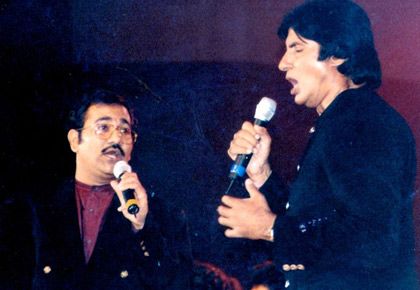 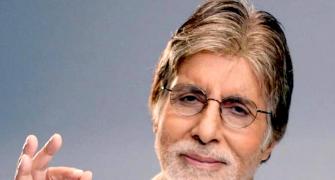 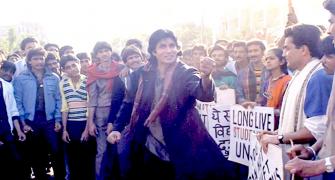 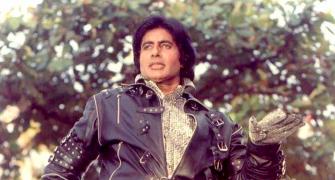 Age is just a number for Amitabh Bachchan