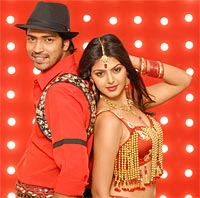 'Allari' Naresh's films generally stand for entertainment and fun where one can have a good laugh. The comedy is rib-tickling and Naresh has fantastic comedy timing.

Sudigadu not just showcases his acting skills but also has a high entertainment quotient.

Director Bheemineni Srinivasa Rao has taken the kernel from the Tamil film Tamizh Padam and re-adapted it to suit the Telugu nativity. He scores fairly well on that account as he has made hilarious films spoofing Telugu movies.

Shiva (Allari Naresh) is born to Kamesh (Naresh) and Hema and right from his birth, he shows that he's a powerful child. His grandmother takes him away to the city from his village  as his parents fear that Thikkal Reddy (JP Reddy) may kill him.

Grown up, Shiva does everything unimaginable -- he chews bullets and lets them out, changes their direction, knocks off people with one punch or push, spoofs scenes of blockbusters and so on. He also falls in love with Priya (Monal Gujjar).He has to encounter the gang of Thikkal Reddy and a mysterious Don Di. Bheemineni Srinivasa Rao has ensured that the parodies are good in fun and taste, and don't offend anyone --

It's fun to watch Naresh do the spoofs with such felicity. However, one should have watched the films in order to understand the spoofs better.

The first half of the film is good fun and whacky at times too. The second half tends to get serious and drags at times. But the climax is rather tame and doesn't go well with the rest of the story. It's hugely disappointing to see the film come down to that kind of a climax after such merriment.

Naresh is the heart and soul of the movie. He has perhaps given his best performance so far striking a balance between comic timing and seriousness.

The new find Monal Gujjar has very limited scope to perform. Brahmanandam MS Narayana (though it was quite strange to see him in the queer dressing), Ali, Kodalavasa, LB Sriram, Venu Madhav and Krishna Bhagavan and Srinivas Reddy played their parts well given the limited roles. Kovai Sarala was apt though she did go overboard at times. Jayaprakash Reddy and Sayaji Shinde did a decent job.

Sudigadu has decent production values. Bheemineni Srinivasa Rao has surely made an effort to adapt the film differently.

The film offers fun unlimited and will surely go down well with families. Watch the film to forget your worries.