Review:Rowthiram is a mindless masala 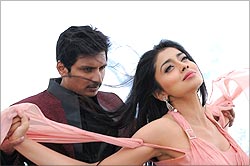 The problem with most Tamil debutant directors trying to ape trend-setters like Mani Ratnam, Sasikumar, Gautam Menon, etc. is that they faithfully imitate the production values, but end up messing up the characterisations and storyline. And when the end product is also supposed to be an old-fashioned masala in a new tetra-pack, even the fact that the hero is someone who can actually act, can't save it. This is pretty much the problem that afflicts Super Good Films' Rowthiram (Fury), written and directed by Gokul.

On the face of it, formula films like this have worked, either because of the superior characterisations, sharp dialogues or just the right mixture of spice. Rowthiram tries very hard, and in the beginning, it actually does intrigue you.

You've got a snazzy flashback sequence that begins in the Kanyakumari district, as an old man (Prakashraj) beats up an entire bunch of wrong-doers with his bare fists. His grandson stands by, watching and grows up learning and becoming an expert in martial arts (although there's no explanation as to why exactly his grandfather advocates it).

Cut to the present, and you have Shiva (Jiiva), all grown-up, free of his grandfather's tutelage and living with his parents (Jayaprakash and Lakshmi Ramakrishna), his brother (Srinath) and sister. The first hour is an interesting mix of comedy, gentleness, and the camaraderie between the family members is heart-warming.

Soon, a pretty heroine is thrown into the mix: Priya (Shreya Saran), a law student (who, conveniently, is seen in college only once) watches Shiva beat up bad guys and immediately decides that he's her man! Shiva, of course, plays the strong, silent hero, mostly brooding. Even his voice is unnecessarily deep, the dialogues uttered with breaks and pauses. This isn't necessarily bad but the problem arrives when you're introduced to the bad guys.

There is such a plethora of evil henchmen, goons, and generally tousle-haired ruffians, starting with the much-vaunted Ganesh Acharya, that you spend most of the time trying to understand which gang is after whom, who wields the most power and who is offing which rowdy.

At some point, practically every thug in Chennai is after Shiva, and despite having an impressive array of arms, all choose to attack him either bare-handed or with sickles, at the most. Naturally, Shiva the Superman bashes them all into smithereens.
Jiiva, as the man of few words who harbours deep emotions, has obviously found the part easy; his acting credentials make sure that even such a one-sided character keeps you moderately interested. After a certain point, though, it descends into tedium.

But it's Jayaprakash who walks away with the honours, as the doting father who is afraid of his son, and for him.

Shreya Saran has nothing to do but prance in salwars in the movie, and in skimpy dresses in duets. The rest of the cast, Ganesh Acharya included, are all more or less part of the sidelines, as it's Jiiva who stands tall.

Of Prakash Nikki's songs, Maalai Mangum Neram (with lyrics by Thamarai) lingers, while N Shanmugasundaram's cinematography fulfills whatever is required of a slick, masala film. The editing, however, fails spectacularly: the movie goes on and on for almost three hours. Plenty of chopping could have been done.

It's the meandering script, the trite dialogues and one-dimensional characters that wreck the pace. Add to that enormous plot-holes, and you have general mayhem. The audience begins hooting at every tragic scene.

Rowthiram is just another mindless action masala, which is more torture than fury. 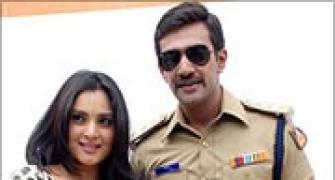 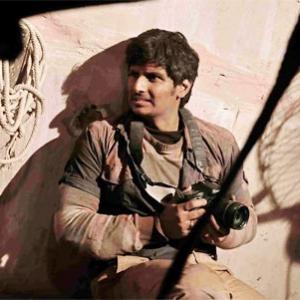 Jiiva: The script of Ko won me over