Review: Rebel is for the masses 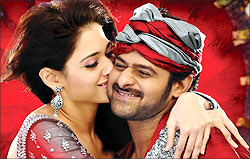 Radhika Rajamani says Rebel has the regular masala which will be enjoyed by the mass audience.

When the Telugu film Rebel begins, one gets the impression that it's going to be an action film. But as the film progresses, it turns into a revenge drama like so many others.

Working with hardly any storyline, director Raghava Lawrence had made a film that is arduous to watch.

Rebel (Prabhas) comes to Hyderabad in search of two thugs Stephen and Robert and takes the help of Narsaraju (Brahmanandam) to locate them. No one has seen these two but their names are enough to terrify people.

Only one man called Nanu has seen them. Nanu has a daughter Nandini (Tamannaah Bhatia) who teaches dance in Bangkok.

Rebel flies to Bangkok, befriends her and pretends to fall in love with her in order to get the contact details of Stephen and Robert. Nandini believes that he is a good guy, till they come back to India and she sees him killing people.

In a flashback, he is Rishi, who is in love with Dipali (Deeksha Seth). The flashback explains the revenge motif.

The screenplay is predictable and illogical. The whole film is very loud. Lawrence tries to make it stylish with super cool villains, fights, Russian girls and even eunuch-like characters but to no avail.

As a choreographer, he has got the best out of Tamannaah and Prabhas. He has chosen to focus on Tamannah's sex appeal rather than on her acting skills. She looks glamorous and dances well.

Prabhas does a good job. Deeksha Seth didn't have much of a role. Krishnam Raju, Brahmanandam, Pradeep Rawat and Mukesh Rishi do what is expected of them.

The music, scored by Lawrence himself, is average. Rebel is a movie for the masses and certainly not for the discerning audience.