Review: Gaganam is a must-watch 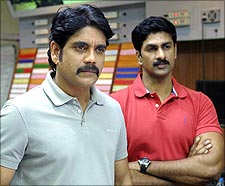 Director Radhamohan has crafted a brilliant hijack drama in Gaganam. The film is filled with suspense and thrills and laced occasionally with humour. Radhamohan seems to have done enough of research for this taut thriller as he weaves in many issues seamlessly into Gaganam. And he's got the cast bang on especially the handsome Nagarjuna Akkineni as the NSG commando and Prakash Raj as the Home Secretary.

There are a motley of characters who board the Delhi-bound Star jet plane at Chennai airport. There's a central minister (who struts around with his gun-toting guards), a star Chandrakanth (who has done a movie wherein he fought the dreaded terrorist Yusuf Khan), Sandhya (Sana Khan) who wants to go ahead to attend her cousin's wedding much against her father's wishes, a couple whose daughter is on the verge of delivering their grandchild, a girl who wants a separation from her husband and hence leaves home with a letter written for him, a couple from Pakistan who got their daughter's heart surgery done at Chennai and going back with their little girl Afsana, a Christian priest, a boy going for an interview, an astrologer, a fan of star Chandrakanth, a retired colonel of the army, a drug addict, etc.

After the take-off, the terrorists are shown removing their guns and other ammunition. While everyone is scared, the pilot somehow manages to land at Tirupati. It is here that the real drama unfolds between the hijackers, the government officials and the commandos.

The camera moves from the aircraft, where the passengers fear for their lives, to the ground and the meeting room which has a typical government atmosphere pervading through. The whole proceedings are so quick and taut that it keeps one on the edge of one's seat.

Vishwanath (Prakash Raj) plays the Home Secretary while Nagarjuna is the commando Raveendra. Dr Bharath Reddy (a cardiologist in real life) plays Nawaz, another commando. There are three other government officials one of whom is played by Shankar Melkote.

As the deadline approaches, tension mounts and each minute is suspenseful. Raveendra goes about his job in a systematic, analytical way, while the government officials are hung up on their approach. In this scenario will they be able to rescue the 100 odd passengers in the plane?

The film gives some anxious moments and some humorous moments too. The dialogues between the star, Chandrakanth and his fans are entertaining, while the conversation between the little girl and the terrorist is emotional. One has to see the film for the innumerable nerve-racking and panicky moments faced by the passengers inside. The terrifying situation gradually builds up to the nail-biting climax.

Radhamohan has captured the fright, fear, worry, tension, panic amongst the passengers and the attitude of the government and its officials, in an apt manner. There is never a dull moment. As a raconteur, Radhamohan excelled with films such as Mozhi and Abhiyam Naanum. In Gaganam too he has done a great job given the fact that it is in a different genre.

The screenplay is perfect and taut with no room for boredom, the dialogues by Anuradha Umarji are just peppered with the right amount of force, humour, or power, the background score is suitable to the thrilling narrative. The airplane set made on scale is amazing and Kathir should be complimented for this.

K V Guhan must have had a tough time shooting with the camera inside the aircraft and getting the mood right (as a large part of the drama is in the plane) but he has done a fine job. The editing by Marthand K Venkatesh too doesn't leave any room for boredom. Though it seems to be inspired by the Kandahar hijacking, Radhamohan has added enough meat to make it riveting.

Nagarjuna suits the role of a commando to a T with his fit and agile physique. He has done a remarkable job. Prakash Raj as usual is good. Poonam Kaur plays an airhostess well. All the people essaying the different roles strike a chord with the audience.

Gaganam is a film in a different genre (sans songs and dance). a welcome change. Kudos to 'Dil' Raju for producing Gaganam and Radhamohan for scripting and directing this edge-of-the-seat thriller. This one is a must-watch.