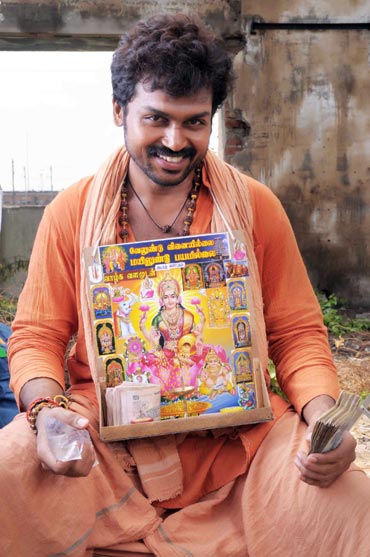 After acting in films based on original scripts like Paruthiveeran, Aayirathil Oruvan, Paiyya and Naan Mahaan Alla, Karthi has joined the bandwagon of actors like Dhanush and Jayam Ravi -- the remake rajas of Tamil -- in a remake of his own.

Karthi's next project is Siruthai -- a Tamil remake of Vikramarkudu, a hugely successful Telugu film made in 2006 starring Ravi Teja and Anushka and directed by SS Rajamouli.

Karthi has a double role in the film for the first time -- that of a thief and a police officer.

Siruthai is directed by Siva, a cinematographer-turned-director from the Telugu film industry and produced by Studio Green's K Gnanavelraja, who is Karthi's cousin.

He is paired opposite Tamannah for the second time after teaming with her in the successful Paiyya.

Vikramarkudu had lots of action and humour in it and Karthi who has a good sense of comic timing is expected to shine as the thief!

The film is slated for Pongal.