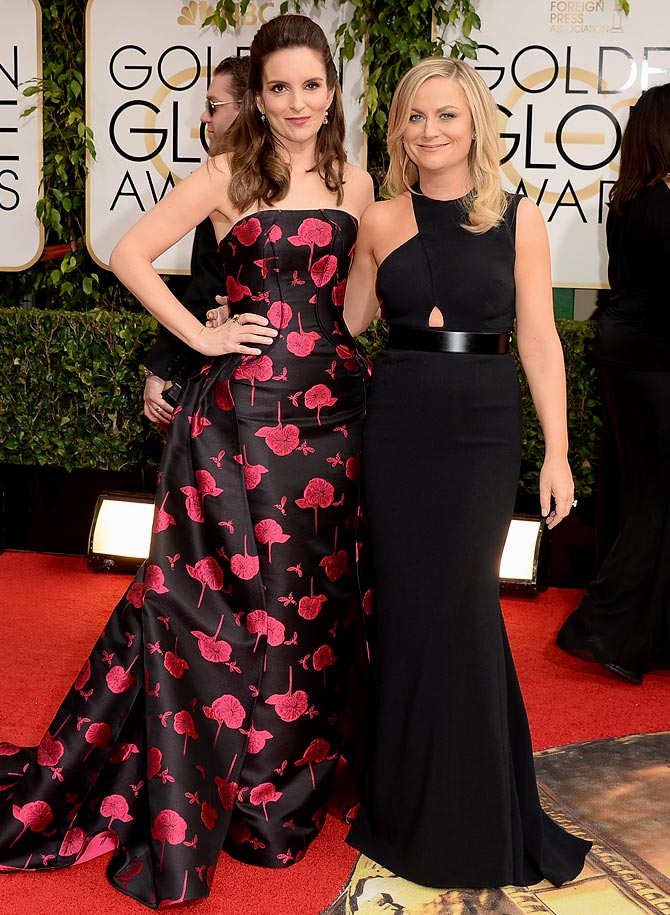 The 71st Golden Globes awards had a lot of high points in the ceremony and threw a few surprises in the winners list.

Here's looking at some of the highlights of the ceremony.

The girls were back in town.

The 71st Annual Golden Globe Awards saw last year’s much-acclaimed hostesses Tina Fey and Amy Poehler return to the dias, with Fey saying that in the Hollywood tradition, they’ll now keep coming back till everyone hates them.

The comediennes were in fine form as they took on everyone from Martin Scorsese (who giggled delightfully in the audience) to Gravity ('George Clooney would rather float away into space and die than spend time with a woman his own age.')

Other ladies proving themselves cool here were Julia Roberts, whose laugh is a pleasure all its own, and Julia Louis-Dreyfus, who played along with the hostesses’ jibes gamely, e-cigarette in hand and shades on head. Like a lady Jack. 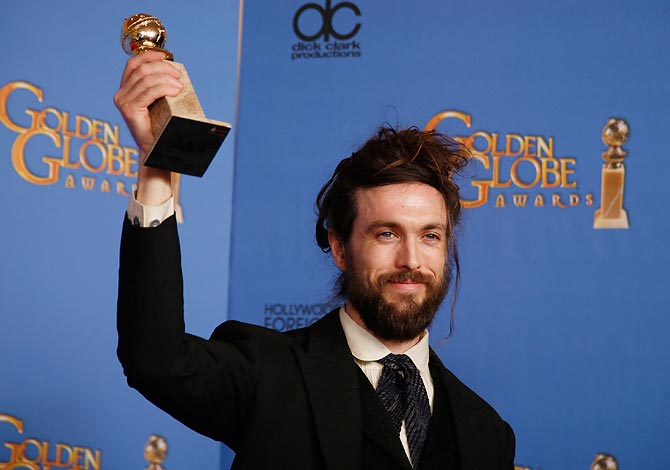 JC Chandor’s much-acclaimed All Is Lost hasn’t won much award-love, but Alex Ebert -- frontman of Edward Sharpe And The Magnetic Zeroes -- won the prize for his first cinematic effort.

“Even the most deft pen is a clumsy tool,” the young man summed up eloquently, “And yet we still try for magic.” 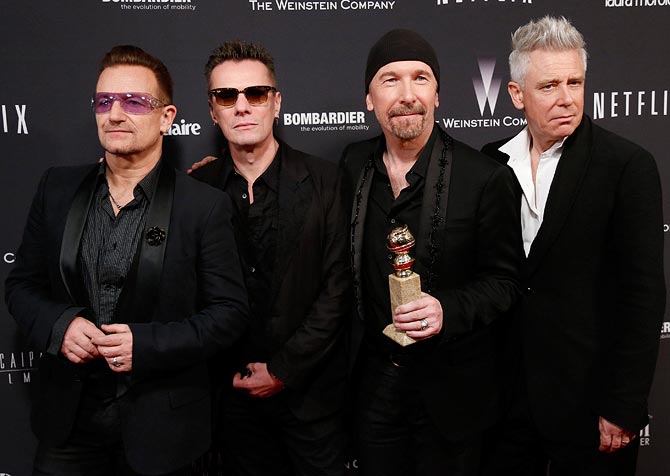 U2’s first new song in ages won the prize for Best Original Song, the only award going to Mandela: The Long Way Home.

That's what Mandela does, the man who "turned our lives upside down, right side up." 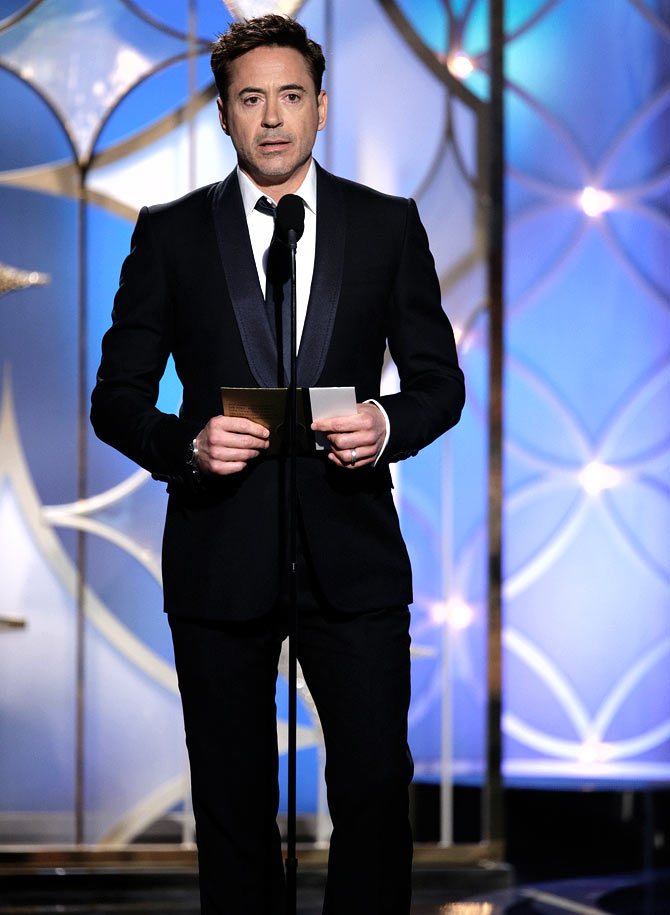 He might be the highest-paid actor in the world but Robert Downey Jr didn’t get where he is by being reverential.

He kidded about each nominee in the Best Actress (Musical/Comedy) category, saying he would win no matter what. “If Amy (Adams, American Hustle) wins it and I get a racy photo of us backstage, Gucci lets me keep the tux.

"Should it be Ms Delpy (Julie, Before Midnight), it reaffirms the artistic integrity of sequels.

"If it goes Greta Gerwig’s (Frances Ha) way, I shall finally stop associating her surname with a film about an Angry Inch.

"And yet, if it’s Meryl (Streep, August: Osage County) I could supplement my income by leasing her a shipping container to put it in with the other 200,000 awards she’s recieved.”

Amy won, but so did RDJ.

Is Harvey Weinstein my father? 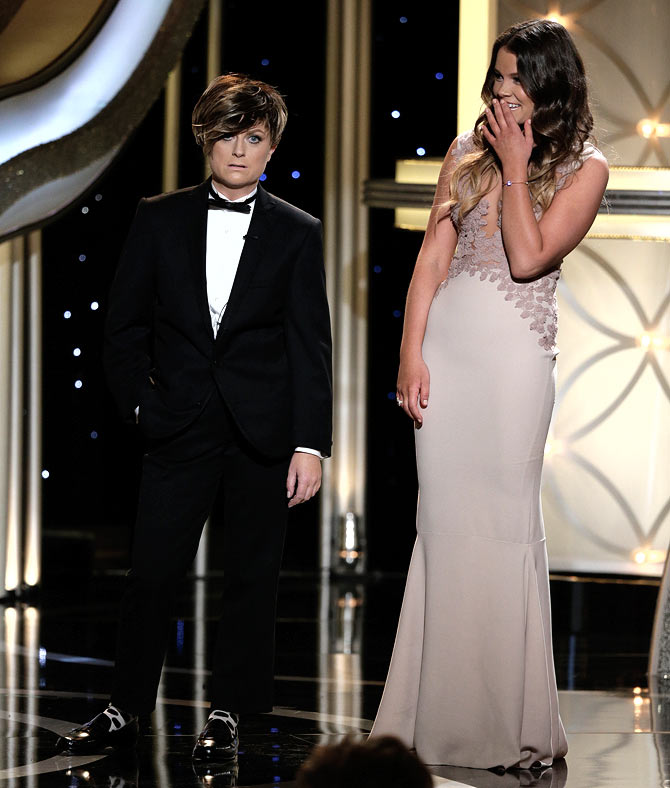 Kevin Bacon’s daughter Sosie was this year’s Ms Golden Globe, but Amy Poehler upstaged her entirely when she showed up as Tina Fey’s illegitimate son, Randy.

A sullen youth with Trump-gone-wild hair, ‘he’ walked up to various famous guests speculating on which could be his father. Fey denied that Idris Elba was Randy’s father, but when Harvey Weinstein was pointed at, Fey went all, well, fey. 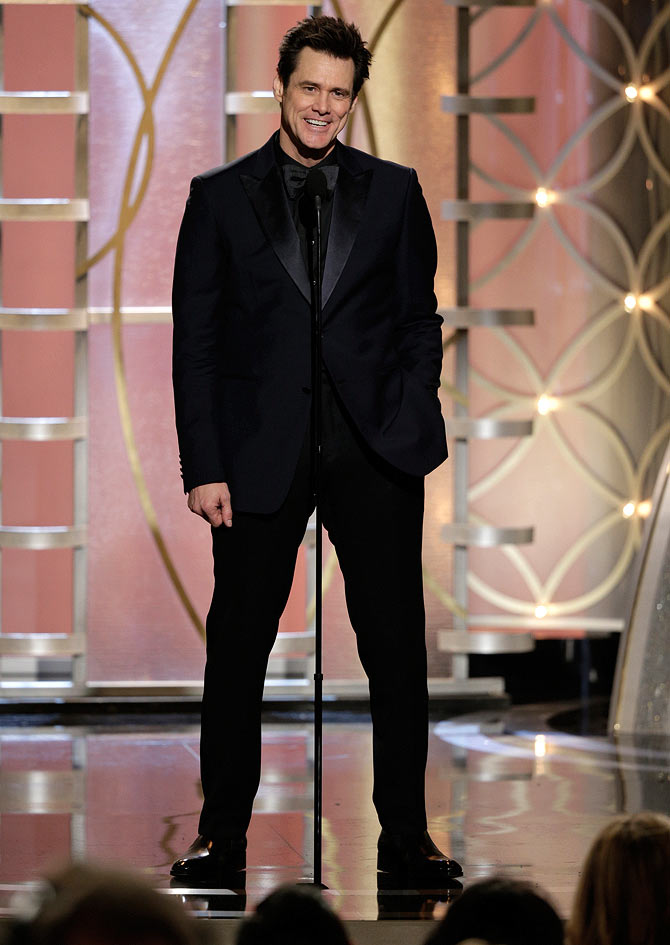 Carrey, with his high-wattage grin and rubber-faced energy, always livens up a show, and the actor kicked things off with a potshot at iconic plagiarist Shia LeBeouf.

“Dying is easy, comedy is hard”, Carrey quoted, uttering familiar words attributed to actor Edmund Kean and made immortal by the late great Peter O’Toole in My Favourite Year.

“I believe it was Shia LeBeouf who said that,” Carry continued with solemn appreciation. “So young, so wise.” 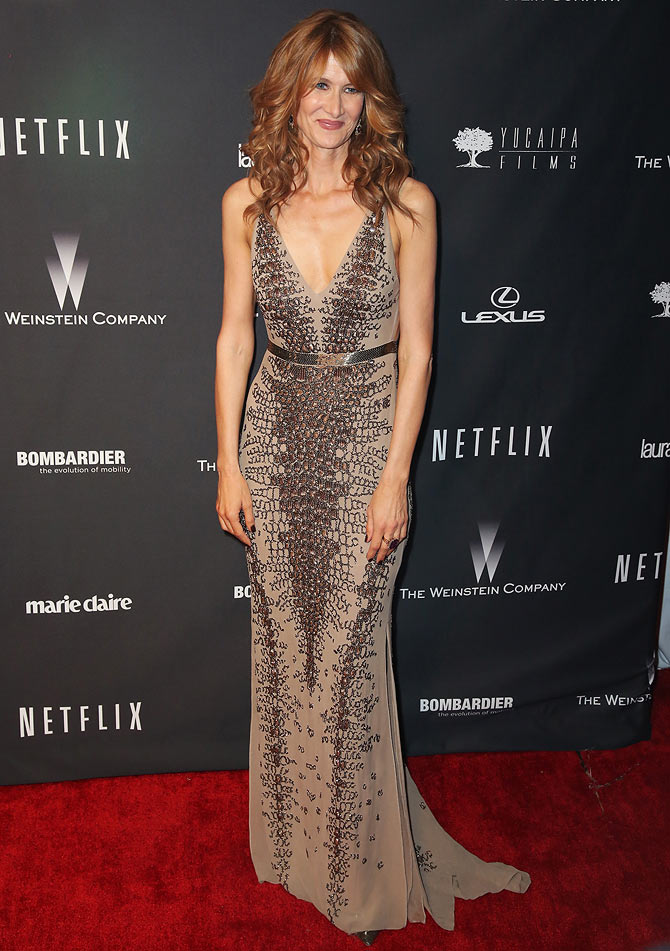 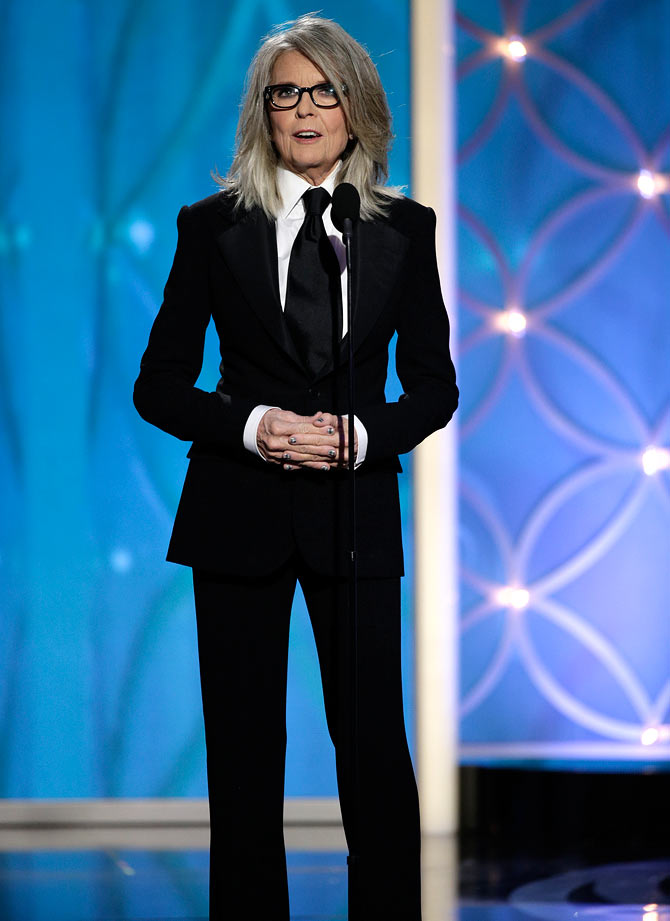 Woody Allen doesn’t show up to awards shows, even when he’s getting the Cecil B DeMille Lifetime Achievement Award.

But his ladies were all around.

Emma Stone, the latest Allen girl in his upcoming feature, presented the award and Diane Keaton -- one of his most frequent and celebrated actresses/muses -- showed up to claim the award with “La Dee Da” scattiness.

Julia Roberts, Meryl Streep, Naomi Watts -- all Allen heroines of varying vintage -- sat and looked at Keaton in rapt admiration as she sweetly stumbled over her homage. 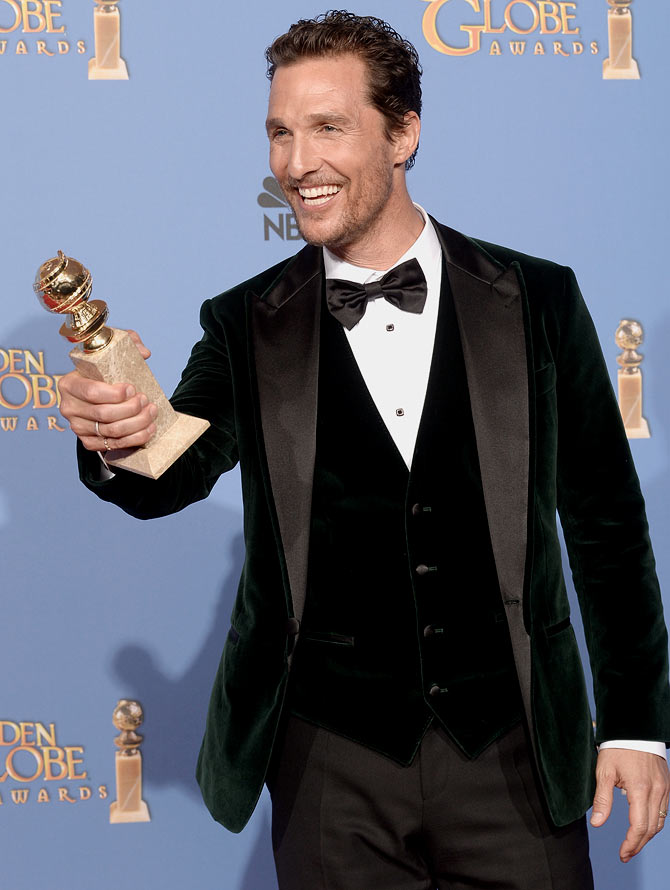 The Southern accent stayed in place as the actor charmingly thanked the nominees, the story, his mom and finally, most memorably, his wife: “To my wife Camilla, who has not only put up with me for all this time, in our seven years and the last three years of wonderful work, but kicked my ass out the door and said ‘Go git it, go git it, McC, my man, my king.’”

And so he did.

When Steve McQueen needed to be struck on stage: 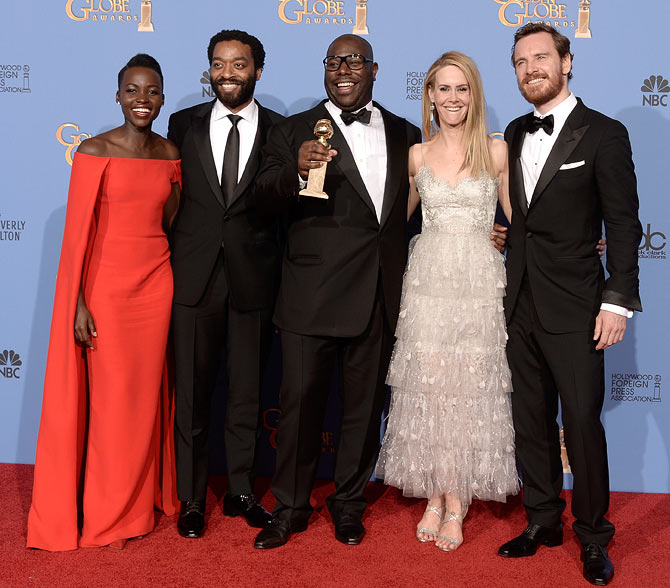 Despite as many as seven nominations, the Globes looked to be shutting out Steve McQueen’s critically loved 12 Years A Slave almost entirely, leading to some serious dissension online, until the Hollywood Foreign Press Association hoodwinked us all by giving the “biggest prize of the night” to 12 Years A Slave, a prize everyone assumed would be won by Alfonso Cuaron’s Gravity.

So rattled seemed director McQueen that he asked to be hit on the head a couple of times on stage so he could manage an acceptance speech. (It’s a good thing Cuaron wasn’t within walloping range.)