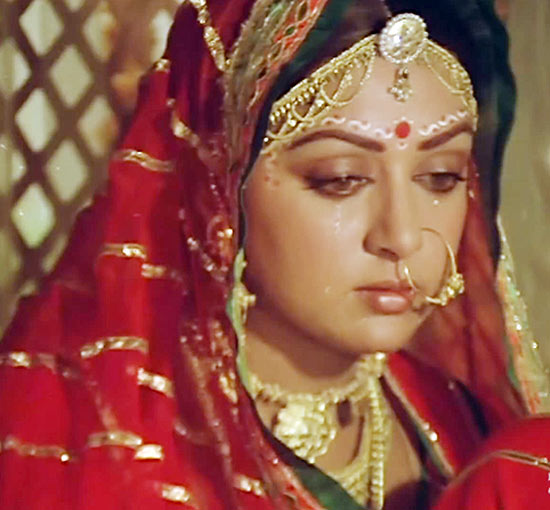 In our special series re-visiting great Hindi film classics, we look back at Gulzar's Meera (1979).

It’s the 16th century yet Gulzar’s Meera refuses to bow down to the constraints of social expectations and gender-based designations. When she’s derided for failing to bear a child and fulfilling her wifely duties in the name of dharma, an unyielding Meera utters the aforementioned lines asserting how her individuality isn’t a slave to norms and preset ideas of dictated commitment and devotion.

Meera is in love, hopelessly, irrevocably but the recipient of her ardour is no mere mortal -- Mere toh Girdhar Gopal doosro na koi. As a gullible little girl, she believed her mom when she said playfully pointed out at Lord Krishna’s idol as her dulha.

When I first watched Meera on Doordarshan, I could relate to her fixation. I harboured it too.

Krishna is one of the most tangible, most vivacious of all Hindu deities. And his adventures in Amar Chitra Katha comics fed my temporary infatuation, resulting in a liking for freshly churned butter, swings, peacocks and his beloved bansuri (flute). I read about his most dedicated devotee too and liked her enough to buy a Meerabai doll from Red Fort’s Meena Bazaar.

Over the years and multiple viewings of Gulzar’s relatively unsung 1979 creation, essayed by a sublime Hema Malini, I have come to regard it as one of my favourites from Hindi cinema’s most intuitive writer and filmmaker. His understanding of the divine saint/poet is so deep-seated, it’s as though they’ve met before, perhaps in a secret waiting room created by a time warp. 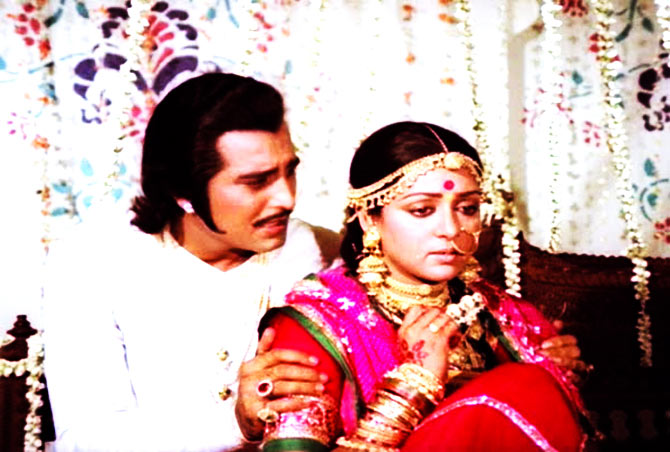 Even though it’s a period setting, the treatment is visibly modern. Gulzar’s depiction of a typical afternoon in the life of the royal Rathod family (Sreeram Lagoo, Dina Pathak) and children (Vidya Sinha, Hema Malini, Dinesh Thakur) is not too different from the warm, candid camaraderie of Khubsoorat’s living room, also written by him.

Is it accurate? Unlikely, but it sure challenges the rigid reproduction of history. All through Meera, Gulzar opts for an episodic narrative, which breaks her story from her life as a princess in Medta to her days in Chittor after marrying Rana Bhojraj (Vinod Khanna) for reasons related to politics and honour.

Unable to accept a union she did not seek, Meera reserves her allegiance for her beloved Krishna.

Vinod Khanna, who was in a rush to renounce the world himself and find peace in spiritual guru Osho’s teachings, teased Gulzar about how he could relate with Meera’s character more than his own. But the actor is exceptional in conveying the predicament of a husband (originally offered to Amitabh Bachchan) who is a complex mix of umbrage and sympathy. 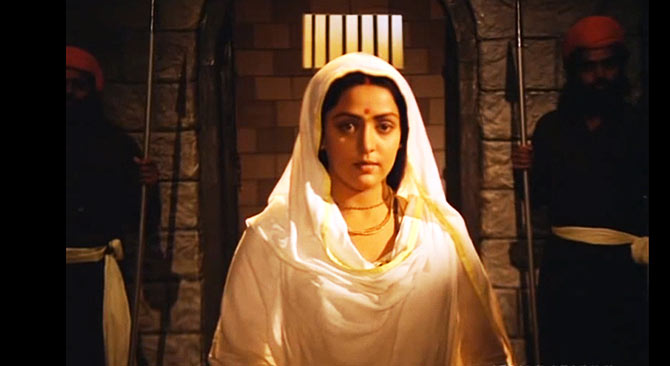 Films about spiritual objective tend to be slow and sombre but Gulzar’s Meera is not so much from a mythological point of view. Instead, it strives to reconstruct a bygone age in history while highlighting the human face of Rajput pride and its harsh compulsions.

I always found Ashutosh Gowarikar’s Jodhaa Akbar to be hugely derivative of Meera in terms of aesthetics.

At any time, the intricacy of thought and evolution is what leads to progression in society and through Meera’s radiant logic on emotions, vegetarianism and religion or Emperor Akbar (Amjad Khan)’s secular appeal, as he constantly reiterates the need to be identified as an Indian not an invader from Samarkhand, Gulzar attempts to achieve it credibly.

“Would it be wrong to say that, inspired by Meera’s life, I have set her to my own tune?” he once said.

His focus is on chronicling the metamorphosis of a princess who renounces a life full of privilege and riches. She doesn’t let any obstacle stand in the way of her exemplary bhav of bhakti, once she’s set free by the ‘iktaara’ presented by Sant Raidas (A K Hangal).

She’s mocked, slighted, humiliated, ridiculed at every step, especially by her snooty sister-in-law (Sudha Chopra) and family priest (Om Shiv Puri), for her perceived insolence but 'Baala’s bairaagan' Meera has witnessed the existence of a celestial realm, which makes everything around her insignificant, inconsequential.

Thankfully, the villainy is understated; there’s no attempt to amplify the troublemakers or non-believers with a dramatic background score. 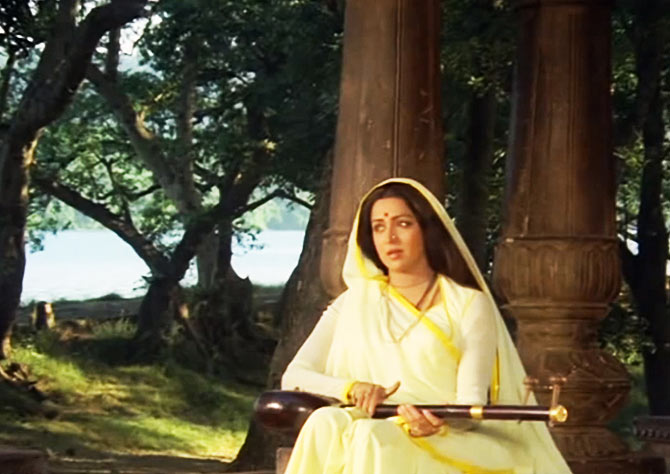 Her soul is filled with infinite happiness when she seeks her lord. And till she suppresses her essence under the baggage of relationships and gold, she suffers in misery.

Lata Mangeshkar was the obvious choice for the soundtrack but since she had just completed a private album on the same subject for her brother, Hridaynath, she declined the project fearing clash of interests.

Gulzar knew most composers wouldn’t accept the film, fearing they would offend the grand diva of playback singing and approached Pandit Ravi Shankar by flying all the way to New York City. After convincing him, they both finalised on singer Vani Jairam who went on to win the Filmfare trophy for her golden contribution to Meera. 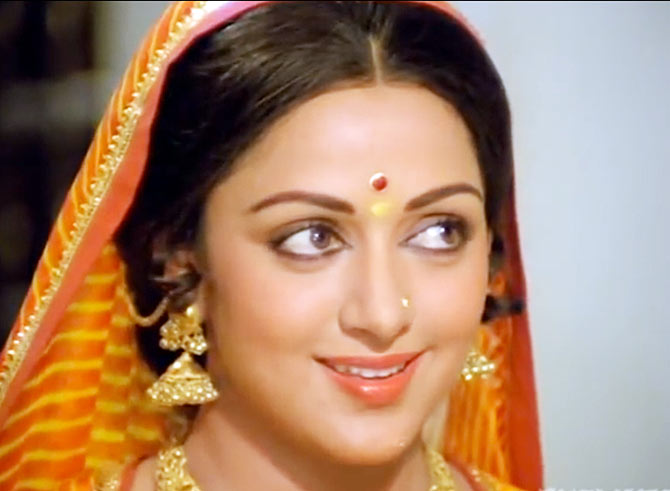 What I love most about Meera is how Gulzar doesn’t intellectualise the premise but makes it as accessible as possible.

Even the miracle elements of Meera’s legend honours their vague source, but leave their authenticity as a matter of belief. Did Tansen and Akbar really dress up like civilians to meet her? Did she really survive a bowl of poison?

His poetic narrative is concerned with the making of a saint.

The Gulzar stamp is unmistakable in the scene where Meera goes to see Sant Raidas and the word play that follows after she introduces herself. “Main hoon toh Meera kyon? Aur Meera ho toh main kaun>” So profound, so simple.

Moreover, only Gulzar can think of giving Akbar a line like “moong ki dal ke baghaar mein heeng ka tadka bahut acha lagta hai” and pull it off too. But it’s the commonplace details done right that elevate good to great. 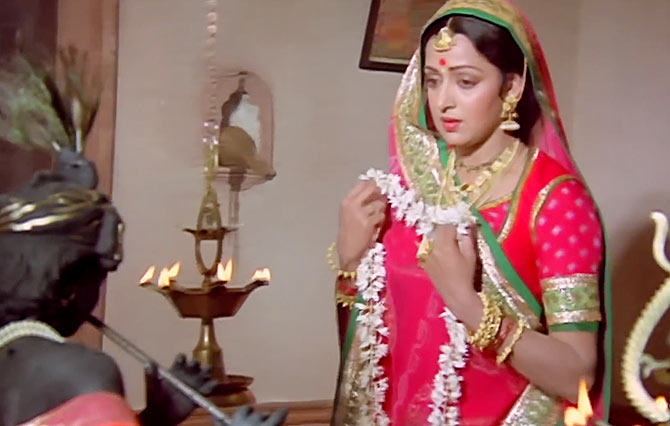 Meera is as much his triumph as it’s Hema Malini’s.

They had previously worked on the critically acclaimed Khushboo and Kinara, two of her best performances. As the beatific face of a divine romance, shot lovingly by K Vaikunth’s camera, the actress exudes exquisite grace, poise and calm. Gulzar recognises its innate presence in her being and brings it forth flawlessly.

In the beginning, she barely utters a word and mutely observes the frantic developments but her silence expresses her internal disquiet in conforming.

One can tell it’s only helped in hurrying her detachment from domestic life. In a century when a life other than being someone’s something was unthinkable, she eventually emerges as a resilient, fearless, outspoken, transparent, independent and indiscriminating woman.

Despite such a magnificent delivery, the Dream Girl lost out to Jaya Bachchan in Nauker.

At a time when the angry young man reigned supreme, the delicacy of Meera was lost on viewers looking for gyaan-free masala.