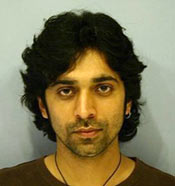 Abhishek Arora, of the Akshay-Abhishek duo who put the Rum-Whisky in Vicky Donor, has composed the title song for a new show called Love By Chance, aired on Bindaas.

The show is about different people meeting and falling in love with each other.

He has composed the title track for Yeh Hai Aashiqui, for Bindass in the past.

In this interview, he tells Rajul Hegde about his musical journey so far, who inspires him and what he plans for the future.

I came to Mumbai 10 years ago from Delhi and started with composing background scores for serials.

I then moved to advertising. Guns And Roses (Indian TV show produced by Goldie Bhel) was my first television score. I got the award for the best background music for it too.

I composed the background music for Darna Mana Hai and Happy Go Lucky.

I met Soorjit Sircar and did lots of ads with him. I also scored music for his film Vicky Donor.

That was my debut as a film music composer.

I also did background scores for films with a friend of mine Sameeruddin who has composed the music for almost 10 films such as Bluffmaster, Yahaan, Ugly Aur Pagli, Shaadi Ki Side Effects, Just Married etc.

'I got my first instrument when I was 15 years old'

When did you discover that you were interested in music?

When I was in school I used to play music with buckets and frying pan covers as drums.

I would watch the senior school band perform in school competitions.

My parents didn't realise that I wanted to become a musician. In class 10, I was very keen on buying a drum kit. I told my mom if she got me a drum kit I would give my board exams.

My mother promised to get me one after the exams. So I got my first instrument when I was 15 years old.

I started playing music with many live bands in Delhi.

It took some time for me to convince my parents about my career choice. They are not from a musical background; everybody is an engineer at home.

A R Rahman has been my inspiration but these days I like Amit Trivedi because he is different, fresh, and does what he likes to do.

I get to do different stuff so I end up listening to everything.

Now I primarily do ads and television shows only if it's interesting, like working with Bindass.

What was your brief for the title track of Love By Chance?

The only brief was to compose a track for a rom-com show.

They didn't require an out-and-out romantic song, but a fun-filled romantic one that describes the concept of the series.

It's a love story; people meet accidentally and fall in love.

This is what happened to me and my wife. I was composing music and she was assisting a director. It's very true and happens to everyone in life.

I made Shahid Mallya sing the track since I wanted a voice that had a touch of folk in it.

Bindass gives me complete freedom. I like to work with people who give me space and freedom to work.


Image: A scene from Love By Chance

How do you evaluate your career so far?

It wasn't easy. But, luckily, my friend Sameer in Mumbai called me and said I can join him for the background score for Yahaan.

After that I met Goldie through a friend and started doing television scores.

Then, through someone else, I started making music for advertisements.

Have you ever been out of work in the last 10 years?

Luckily I didn't have to go through any low phase in my career.

Anyway, I am a very satisfied person. I am cool with whatever I have.

The point is to make good music. As long as that is happening, it's fine (smiles).


Image: Jimmy Shergill, Minisha Lamba in the poster of Yahaan

'Bappi Lahiri is the sweetest guy I have ever met'

Do you see yourself composing music for big banner films in future?

I want to do film music for sure.

I get to explore different topics and styles in advertisements, but it is limited to 90 seconds, as it’s all about a product.

In films, I get to create a whole song. Unfortunately, right now, film is the only medium where you can write songs.

Television is becoming important as the demand for title tracks is increasing.

Love By Chance was a great opportunity to write a good song.

Are you part of any band?

No. At times I play for fun with my friend Neha Bhasin's English band.

Is there any music for films in the pipeline?

Bappi Lahiri has sung the number. He is the sweetest guy I have ever met. We recorded this song in his Juhu bungalow in Mumbai.

I was very scared when I met him because his wall is covered with only awards.

But he liked the tune and on the day he did the voice test. We finished recording the song seven days later.

After singing every line, he would ask if it was okay or if he should change it or give another option.

It's a wedding dance number and you'll get to experience something different.