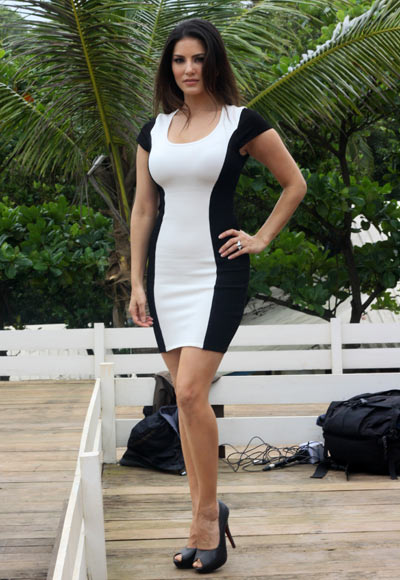 Patcy N and NV Reuben take off for Goa to spend some time on the sets of Kaizad Gustad’s film Jackpot, starring Sunny Leone and Naseeruddin Shah.

Sunny Leone is on the sets of her latest film Jackpot in Goa, and she’s very excited.

No, it’s not the film that she’s so thrilled about. Nor is it the stylish hotel Hotel Casa Vagator, situated in the quaint beach of Vagator, where we are at the moment.

“I am excited that my husband (Daniel Weber) is around,” she explains. “I am very excited about helping him with his look in the film. I have been helping him out with what he should wear and how he should look.”

She’s so charged up about Weber’s Bollywood debut that she’s on the sets even when she’s not required, and spends her time fussing about Weber’s make-up and costume.

'Tattoos are a fad in Goa' 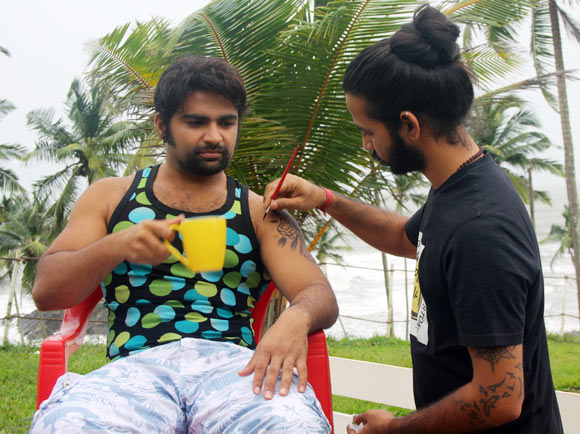 At 7am, everybody has already had their breakfast and the actors are ready with their make-up on. It’s quite surprising for a Bollywood film where the actors are always late.

Actor Sachiin Joshi, who plays the lead in the movie and is also the producer, is busy getting a tattoo painted on his hand. It’s of a big cross.

“Tattoos are a fad in Goa. All the young boys over here do it. It’s cool,” he says. He chose a cross because his character in the film is Catholic.

'I was in the mountains, meditating' 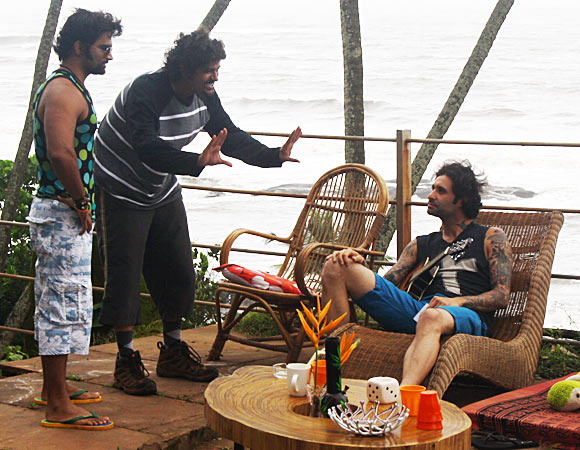 Kaizad Gustad, director of the film, is the busiest man on the sets.

He discusses a few things with his assistant director, Adam Bedi, son of Kabir Bedi, who is also acting in the film.

Adam then leaves the hotel and goes to an adjoining bar called Club 9 where the shot for the day will be filmed.

Kaizad, who started his career with a bang with Bombay Boyz (1998) and the dud Boom (2003), went off the Bollywood circuit after a train mishap killed one of his assistants while they were shooting the film Mumbai Central. Gustad was sentenced to a month in jail and fined Rs 75,000.

He doesn’t want to speak about it. Asked what he has been doing in the last 10 years since Boom, he says, “I was in the mountains, meditating. Now I leave everything to god. I don’t plan too much. I live one day at a time."

'I don't think anyone, including Katrina, would have thought 10 years ago that she would be so successful' 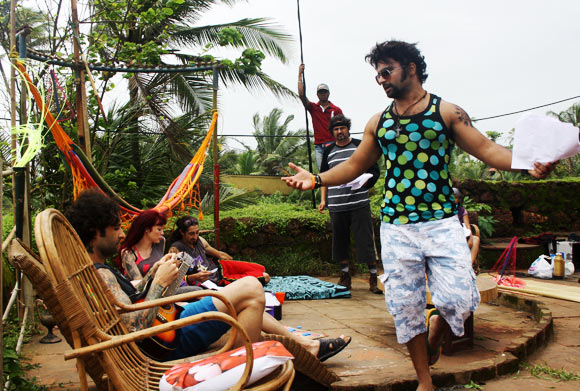 Kaizad had given a break to Katrina Kaif, who debuted in Boom. He says he is not in touch with her anymore.

“I do watch her movies sometimes and am happy to see her success. I don’t think anyone, including her, would have thought 10 years ago that she would be so successful. It just shows where hard work and determination can get you," he says.

Any plans to work with Katrina Kaif and with Amitabh Bachchan, who also acted in Boom? "Of course, why not? I would love to work with anybody."

'The Hindi version of Bombay Boys is lousy' 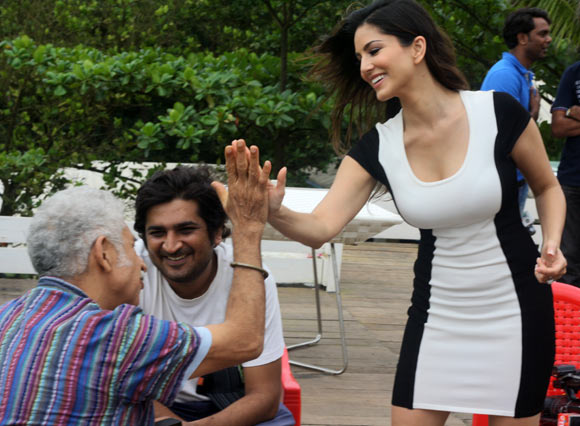 Jackpot is a thriller where the characters try to con each other.

Sachiin Joshi plays Francis, who gets together a small team of Maya (Sunny Leone) and Anthony (Tamil actor Bharath). They try to con Boss Man, played by Naseeruddin Shah.

“I have been waiting to work with Naseerbhai for long. I worked with him 15 years ago on my first film (Bombay Boyz). This time I just sent him the script and he read it and got back and said ‘It’s very cool, I like it and I want to be part of it.’ Ten days later, we were shooting, it was that quick.”

Naseer gives us his version for taking up the film. “I told Kaizad I will do Jackpot on one condition -- if he gives me a print of Bombay Boys in English because that’s lost. Only the Hindi version is available and it’s lousy. So he gave me the DVD and that’s why I signed his film,” Naseer laughs. Then he says seriously, “The role sounded like fun, and the narrative was very interesting. The story travels backward.”

Naseeruddin’s character, Kaizad says, is “very flamboyant and crazy. He is the rich owner of a casino boat in Goa.

“Today, we are shooting a scene where Francis meets and recruits three foreigners to join a casino owned by Boss Man. He wants them to con Boss Man.”

Out of the three foreigners is Adam Bedi, the other is Daniel Weber and the third is a woman.

The location is important Kaizad says “because Goa is a character in my movie. Normally when we see Goa in movies it is beaches, drugs and rave parties, but I have tried to avoid that. We have shot the backwaters, lazy sleepy houseboats and then we have shot casino boats. We have compared the lazy backwater life of Goa to the happening urban life of the casino boat. That’s the two worlds of this movie.”

'You cannot have Sunny Leone and not have anything hot'

The music of the film has eight tracks by eight different musicians including Mika, Juno Reactor, Remo Fernandes, and Javed Jaffery. And, no, there is no item number, despite the presence of the very sexy Sunny Leone in the movie.

Kaizad says he was looking for someone “who had intelligence in her eyes. I was not interested in portraying her as a sexy woman although she is extremely sexy, no matter what we put on her.”

And he is more than happy with the results. “She is an absolute revelation. I have been working with her for 33 days now. I have not seen an actor with her commitment and her passion and dedication to her work.

“She plays a femme fatale kind of character. She is edgy, dark and focused on the money; she is not playing the lover girl. She plays a sophisticated woman who worked in a casino in LA for five years before she comes to Goa. Sunny fit the bill very well.”

So, no hot scenes in the film?

Having said what he has to say, he goes off to Club 9 where Sachiin Joshi is rehearsing his lines with Adam and Daniel, the latter strumming a guitar.