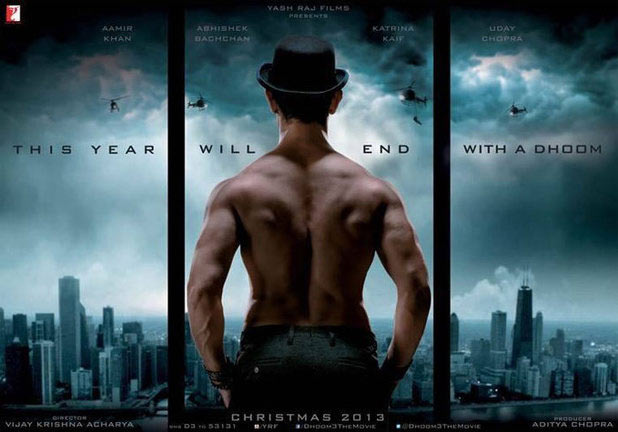 Dhoom 3 boasts of more noise, more bikes and a whole lot of scowling from Aamir Khan.

Instead of having the Yashraj Films logo twirl tiredly to the same old Lata Mangeshkar warbles, this time the promo starts with sound from the film.

Granted, it’s the generic growl of a motorbike engine being gunned hard, but this is progress in terms of Indian promos, where a ninety second trailer usually means 45 seconds of seeing producer logos.

Anyway, we see skyscrapers and hear sirens, and then appears a derby hat being twirled. And then a man wearing the hat, standing shirtless in front of what would be a killer view but seems merely like blue-screen.

We’re seeing him from behind, but Aamir Khan is clearly identified by those distinctive goblin ears.

Dhoom, the word fades onto the screen before fading out again. Khan appears on a motorcycle, mid-takeoff.

His scowl is one of unadulterated fury, as if he’s angry at the bike. Or if it’s slower than some bike Salman owns.

Meanwhile, up in the sky... It’s a bird! It’s a plane! It’s Abhishek Bachchan hanging from a helicopter aiming a gun.

And thanks to the wonders of cinema, his hair is barely mussed. Uday Chopra, the film’s producer, shows up on a bike wearing sunglasses and hoping people don’t notice he isn’t Abhishek.

And lastly comes Katrina Kaif, wearing badass boots and twirling through the air and landing on the set where Hrithik Roshan shot the Dhoom 2 song.

A hard, grungy version of the Dhoom theme plays, Khan scowls again and horizontally slides his bike under a truck. Will it be good? We can’t tell, but it will sure be loud. The trailer ends with the release date -- 20th December, 2013 -- written like a ticking clock that doesn’t tick.