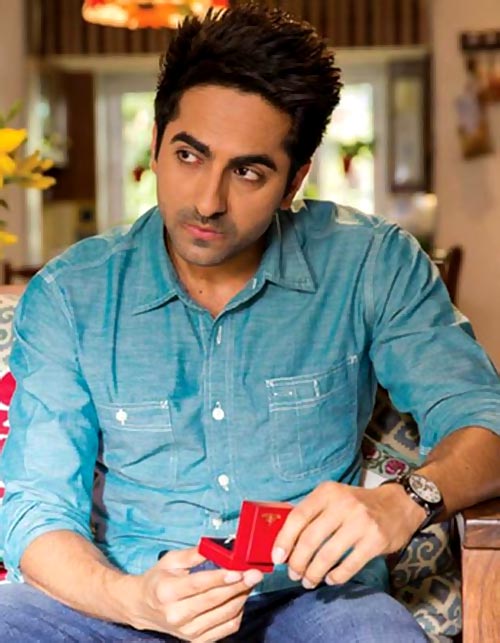 'I got married very early. Most of my contemporaries don’t have the pressure of balancing between career and personal life. It is difficult. My wife Tahira understands this.'

Like his character in his new film, Ayushmann Khurrana has done a lot of bewakoofiyaan in his life.

But unlike his character in Bewakoofiyaan, the actor lives a practical life, away from his family in Chandigarh.

‘My wife understands that this is my time to work hard as an actor’s shelf life is short,” Ayushmann explains.

In a candid chat with Patcy N, he talks about his films, what his wife thinks about his kissing scenes, and much more.

Have you done any bewakoofiyaan in your life?

The chances of doing any bewakoofiyaan now is less as I have been part of the media for five years and have committed my own set of blunders.

Right at the beginning of my career, when I was anchoring a live event, I was told to introduce Aamir Khan at the end. I forgot and called him at the beginning. I got abused for doing that.

In personal life, I have done more bewakoofiyaan. When I got married, I spent all the money I had on the wedding and honeymoon and I just had Rs 10,000 in my account.

I was not settled in my career and I was married. It could have been a big blunder but thankfully that did not happen.

Something similar happens in the film...

Yes. In the film I want to get married and I have Rs 653 balance in my account.

The film is based during a recession. It’s a love story, my girlfriend played by Sonam earns more than me, and I am affected by recession. I am jobless in the film.

Rishi Kapoor plays Sonam’s father in the film. He is against the couple, and the film is about the dynamics between the three.

Even though the film is based in Delhi, Adi told me this is not Vicky Donor. I play a urban Punjabi instead of a desi Punjabi.

'This is the first time I am working with stars' 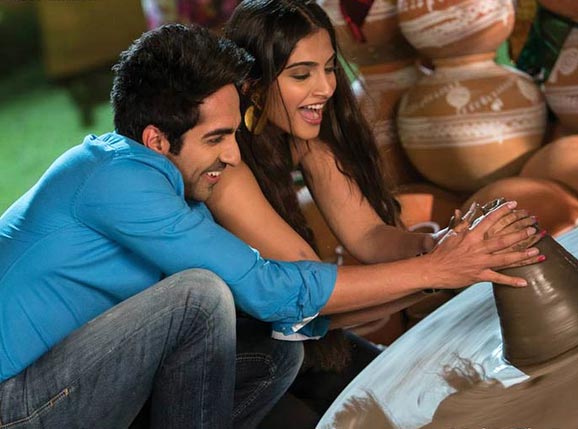 The promotion of the film started little late; are you happy with this…

My films are never promoted, whether it is Vicky Donor, Nautanki Sala or this one.

For Nautanki Sala because the promotions were not done that well, its budget was Rs 12 crore and it made Rs 24 crore. People don’t see it as a successful film but it was successful.

I don’t think the scripts of films are unsuccessful; it’s the budget that is unsuccessful. So I am sure the makers of Bewakoofiyaan have a certain strategy in mind and this film will also be successful.

Sonam Kapoor and Rishi Kapoor have been in the industry for longer than you have. Did you feel left out?

This is the first time I am working with stars. I have learnt a lot from both of them. This is Sonam’s 11th film and Rishiji is a veteran in the industry.

This is my first commercial film. My earlier two films were unconventional. I wanted to do a rom-com.

Apart from Bewakoofiyaan, every film of mine is edgy and quirky and is concept based. Like Dum Lagake Haisha, where I play an uneducated guy from Haridwar.

Then there is 1911 with Shoojit Sircar where I play a footballer from Bengal.

In Bambai Fairytale, I play a Maharashtrian scientist. So this my first commercial rom-com. 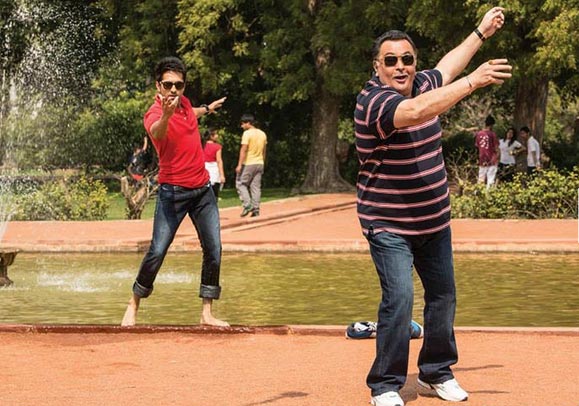 Rishi Kapoor is supposed to be very short-tempered. How was he on the sets?

He can’t tolerate incompetency. He wants everybody around him to be competent and professional. If you are a learner in life then you need to take cues from an experienced actor like him.

He believes in giving just one take. He feels it becomes mechanical if you give more than two takes.

I think I have become a one-take artist because of him. I owe him for that.

You are just doing one film a year...

I have always taken it slow even when I was doing television. I waited for four years to do a film.

I was offered lots of roles but all of them were for the hero’s best friend or may be the lead guy in an average script.

It was important for me to do the first film right. Your take-off is most important -- you can manage the flight later.

I am a patient person. I am not running a race. I only do the film that I really want to do.

I am fortunate that I have the backing of Yash Raj Films and I have a three-film deal with them.

I have two amazing mentors in Shoojit Sircar and Aditya Chopra. That’s why I feel secure. I am in no rush. 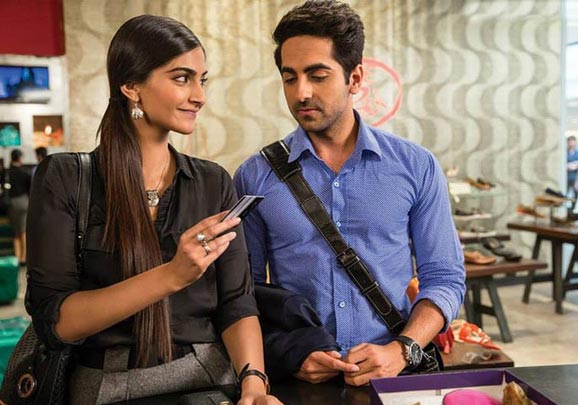 What do you look for in the script?

So I choose characters I can relate to personally; I can take references from my real life experiences, and it becomes easier.

I did not wanted to come out of my comfort level for the first few films. I don’t think you can take a giant leap by doing something extraordinary.

I am a very natural actor. I don’t try too hard to act; more than acting, I react.

Now I will try other kinds of films. I will play a Maharashtrian, a Bengali and a Bhojpuri guy. They are completely different people. I think I am evolved enough as an actor that I can do something different.

Do you think the promo of Bewakoofiyaan has given too much away?

It is a very straight, simple film. The one-liner story is the guy earns less, the girl earns more, the father is unhappy about their getting married.

Every film has a simple one-liner; it’s how you reach the destination that is important. 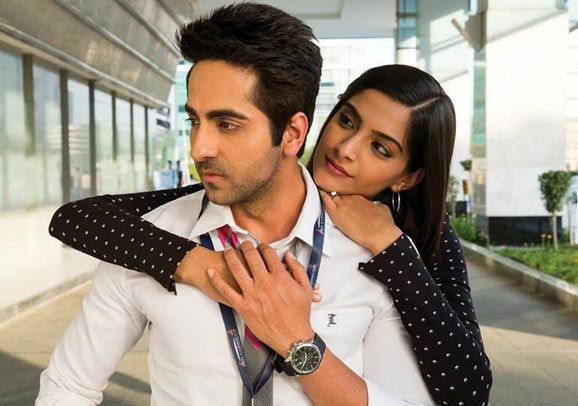 Are you an egoist in real life?

I have no ego. I am not competitive. I am not ambitious. I am content with my life.

You are okay if your wife earns more than you?

Absolutely. Being an artist it is very important that your wife should earn more than you.

You have a long distance relationship...

I am a very practical person. I am a realist.

Don’t you miss being with your wife Tahira?

(Gets a bit upset) What are you trying to prove? That my film is not good? My film plot is bad? My relationship is not good?

I am a sweet simple guy from Chandigarh. 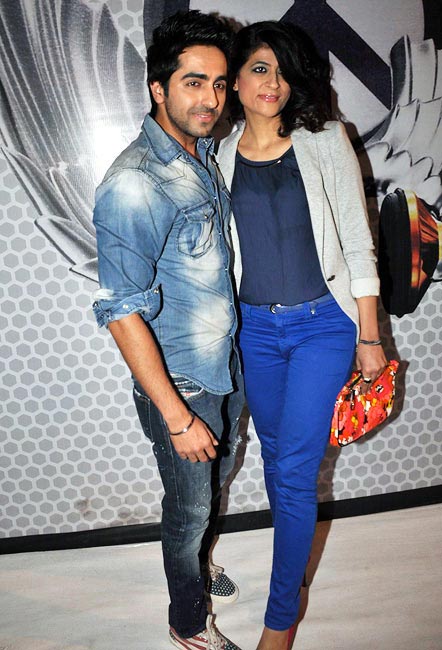 What is your wife’s reaction about the films that you have chosen?

She is very proud of me. She was the first person I told I wanted to be an actor. She is always supportive.

She is very proud of the fact that I have done this on my own without any godfather in the industry.

She reads all my scripts and gives her opinion as she is a writer. I take her opinion seriously.

What is your wife’s reaction to your kissing scenes?

My wife is also an artist so she understands what an artist goes through when doing an intimate scene.

First of all, it is not at all romantic, with so many people around. It is mechanical. I will not do anything that will make her uncomfortable.

Wouldn’t it be easier if your wife stays with you since she is just doing her PhD?

Even if I am here I am out at events. She travels once in a while and sometimes comes on the sets. Practically it is easy for both of us since our families stay in Chandigarh.

It is difficult. I got married very early. Most of my contemporaries don’t have the pressure of balancing between career and personal life.

She understands that this is my time to work hard as an actor’s shelf life is short.

'I am good at languages' 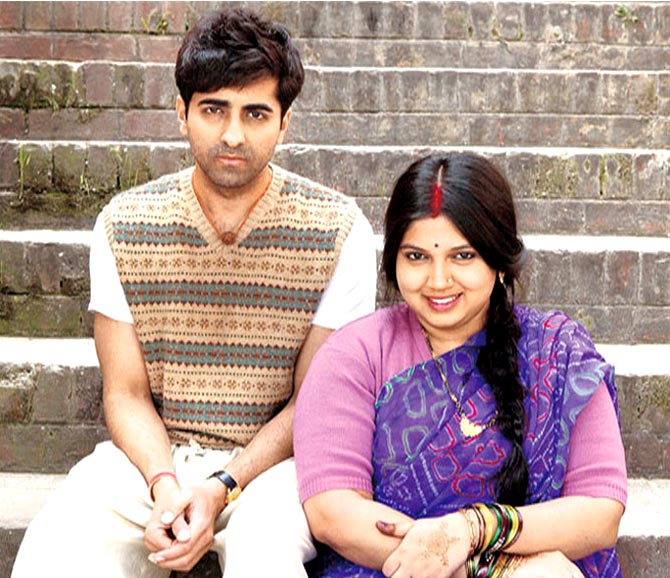 Tell us about your next film Dum Laga Ke Haisha?

It is very unusual film for Yash Raj. It is about two people who are so complex. The guy is completely uneducated, and stays in Haridwar. The girl is very fat but is extremely intelligent. She is a teacher.

I play a Maharashtrian scientist. I understand Marathi. I am good at languages. When I came to Mumbai I bought a book to learn Marathi in 30 days.

What about Hamara Bajaj?

It’s been delayed but I am working on 1911 again directed by Shoojit Sircar. After that we will do Hamara Bajaj.

Your brother Aparshakti also wants to be an actor?

My brother is part of Saath Uchake, shot in old Delhi. He loves being in Delhi. He is doing theatre and radio in Delhi.

He takes care of the family business; we have a jewellery store in Delhi.

He is having fun, not taking anything seriously though he is talented as an actor, singer and composer, just like me.