Sign in  |  Create a Rediffmail account
Rediff.com  » Movies » 'I won't wear a bikini in a film yet' 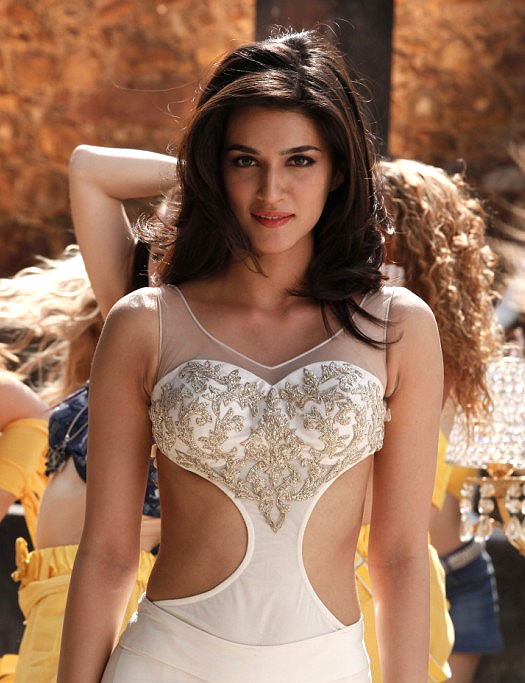 'I could not relate to the character in Heropanti at all.'

Yet, actress Kriti Sanon manages to pull it off, in her first Bollywood movie.

Sanon is now set to make her Bollywood debut along side Tiger Shroff in Heropanti.

The young actress speaks to Patcy N about her unusual career path, the much talked about kiss in her very first Bollywood film, and much more.

How did an Engineering graduate become an actress?

In my second year of B Tech (Bachelor of Technology), I wanted to try modelling.

I needed a portfolio, and the website Ibibo.com was holding a contest for a fresh face.

If you won the contest, you got your portfolio done free by (photographer) Dabboo Ratnani and a two-year contract with Elite Model Management.

I won the contest.

I started modelling while still studying. I liked doing television commercials and being in front of the camera. Lots of ad directors told me to try for films.

'I had never acted in my life' 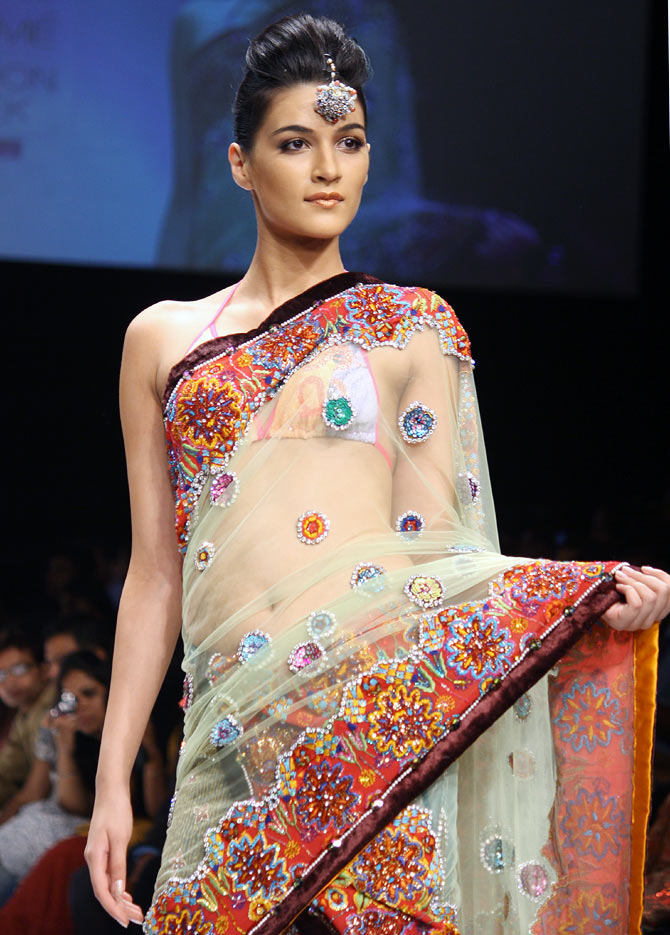 Had you ever done any acting before?

I had never acted in my life.

I had learnt Kathak for six years from the age of eight and did a foundation course from Kathak Kendra in Delhi. I was not fond of classical dance but today I'm glad my mom made me do it.

I come from a family of working professionals, my dad is a chartered accountant and my mom is a professor. It was difficult to convince them, but I succeeded and they have been very supportive.

My father was posted in Mumbai at the time so I had a home here.

I told my parents that while trying for the acting job, I would simultaneously prepare for my MBA and give my entrance exams.

I did the Lakme Fashion Week and some commercials. I also featured in an ad with Aamir Khan for Samsung Hero Mobile.

I was also preparing for the GMAT (Graduate Management Admission Test). I cleared that. My parents thought if I don't get a movie, I can go abroad for further studies.

I also did a month-long private theatre workshop. 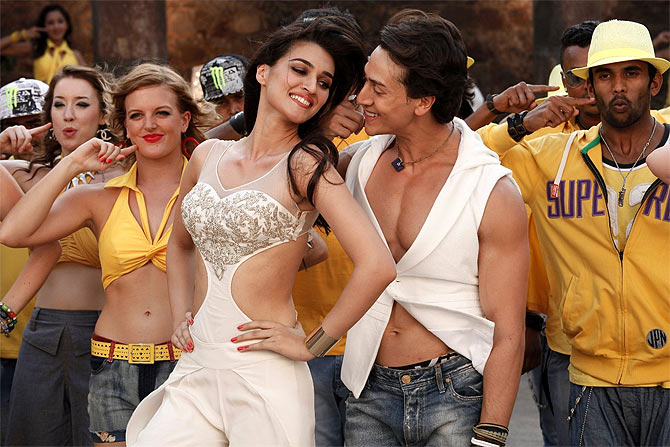 How did you get the offer for Heropanti?

One day I got a call from (Heropanti producer) Sajid Nadiadwala's office -- my agency had my sent pictures to them.

Sajid sir and Sabbir (Khan, director) sir narrated the film's story. I really liked the character I play in the film.

We met again for the photoshoot and that's when I met Tiger for the first time. We auditioned together.

We went to Sajid Nadiadwala's office the same day and Sabbir sir told me on the way that I was about to sign my first Bollywood film contract.

I was shocked and immediately called my parents.

That is how it all happened.

You signed a Telugu film before you signed Heropanti?

Yes, I had signed a Telugu film 1: Nenokkadine opposite Mahesh Babu.

I had completed one schedule of the film when Heropanti happened. I was juggling between the two films.

I signed up for Heropanti in January 2013 and we went on the floors in April. 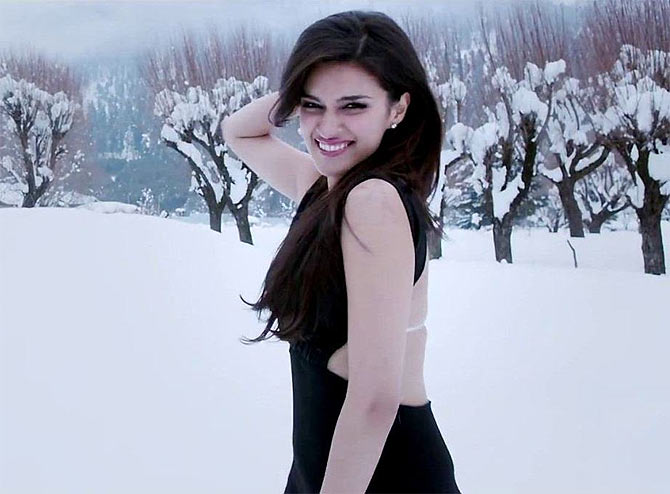 What kind of character do you play?

Dimpy belongs to a very conservative family, she has lots of dreams, she is talkative, bubbly and innocent.

At the same time, since she is not a city girl; she is not open- minded. She comes from a small town on the outskirts of Delhi and travels to college in Delhi every day.

She knows she will have to get married soon and sit at home for the rest of her life and she accepts her fate.

Could you relate to her character?

I could not relate to the character at all. I come from a middle class family but we are open-minded people. I am more of a feminist.

I question things that are not right, unlike Dimpy. She is very childish in front of her father. I am not like that with my father.

But we are both dreamers; we want to do a lot of things in life.

It was difficult for me to play that naïve character.

I would have discussions with my director who helped me a lot. 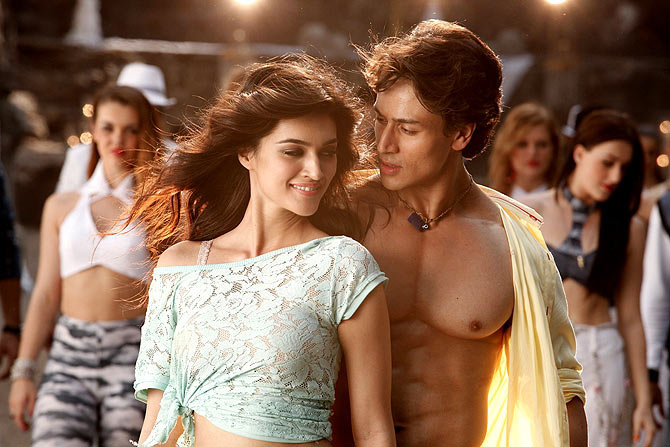 It's been great working with Tiger. We were both new. We didn't know anything about filmmaking.

We were fascinated with everything around us -- the art department, the editing. We have both grown as actors with this film.

He is shy; he talks very little. However, there was no awkwardness between us. We were like buddies on the sets.

He didn't behave like a star son. He would joke that since I had done a Telugu film, I was a senior actor and he should respect me.

Tiger and you share a kiss in the film. Was that difficult?

No, it was not difficult to do that scene. As I told you, we have never felt awkward with each other.

When we shot the scene, we were in our characters.

Our director had explained the importance of the kiss and how relevant it was. So we just went with the flow. 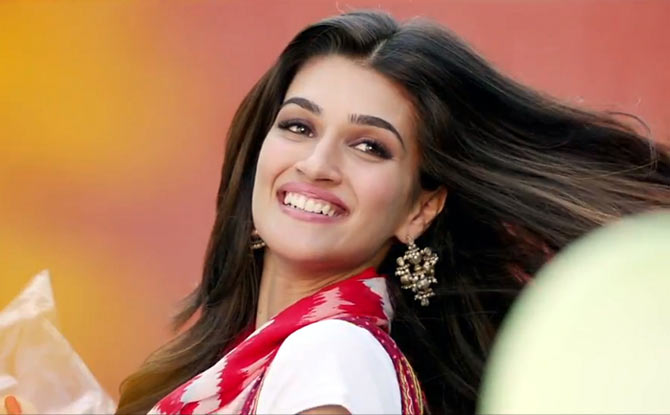 Would you wear a bikini and do an item song?

I do have reservations about that. I would not just do anything in a film.

Right now, I wouldn't wear a bikini. I don't want to wear anything that I am not comfortable in. The moment you are uncomfortable, it shows.

I have a kiss in my first film but I did it because the script demanded it.

As for item songs, Katrina (Kaif) and Kareena (Kapoor), among others, have done some great item numbers -- one of my favourites is Chikni Chameli.

I don't think they look cheap or sleazy.

I don't like the word 'item' songs; call them special appearance or dance numbers.

Any actor you especially want to work with?

There is no one particular actor. I really admire Shah Rukh Khan. I would really want to act with him.

I would love to share screen space with Amitabh Bachchan. I'd like to work with Salman Khan; he has a very unique personality.