Sign in  |  Create a Rediffmail account
Rediff.com  » Movies » 'I have had way too many rejections in my life' 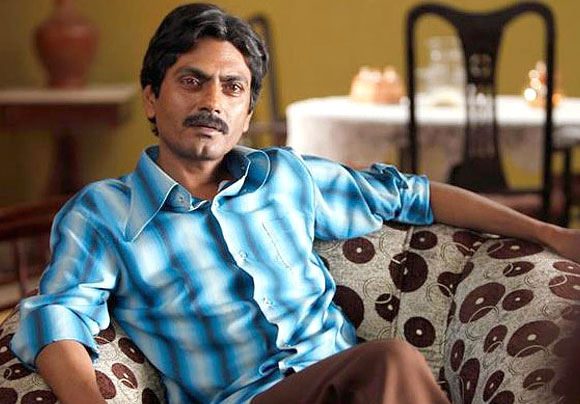 Bollywood was never a part of Nawazuddin Siddiqui's dreams as a child. He wasn't even exposed to it.

The sole movie hall in his village Budhana, situated 32 km from Muzaffarnagar in Uttar Pradesh, screened only 'C-grade films', not mainstream Hindi movies.

Son of a farmer, and the eldest child of nine siblings, all Nawaz thought of was getting out of the village after Class 12, and making a living elsewhere because "the crime rate was very high in that region."

Today, Nawaz is considered one of the most talented actors in the land, with a National Award under his belt, lead roles on his plate, and some of the best directors vying to cast him.

In fact, after his spectacular turn in Gangs of Wasseypur, Nawaz was offered as many as 175 scripts!

Dressed simply in a black shirt and black trousers, Nawaz hardly looks like the toast of Bollywood. Hardly anyone even notices him as he walks through a restaurant at the Westin hotel in Gurgaon. People only have eyes for his Aatma co-star Bipasha Basu, who walks a few paces ahead of him.

As you approach him, he smiles shyly.

Then, as he drinks coffee and chain-smokes, he lays down his entire life in front of you.

'I want only lead roles now' 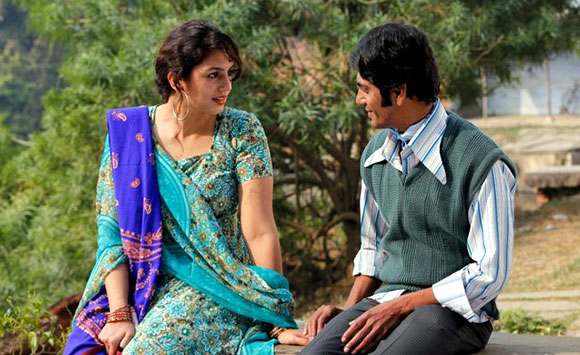 Image: Huma Qureshi and Nawazuddin Siddiqui in Gangs Of Wasseypur

What was your life like before you became an actor?

After I finished Class 12, I left the village and went to Haridwar for graduation in chemistry. Graduation alone isn't enough for a good job. I got a job as a chemist. After a year, I got bored.

Someone introduced me to theatre in Delhi. While watching the play, I loved the concept because it didn't require any suggestions from anyone. The actor could do it the way he wanted.

I didn't have the confidence to act, so I watched about 80 plays. That made me confident, and I joined an amateur group, and performed small roles on stage.

I used to make money by doing backstage work and making posters. I also worked as a watchman in a toy company.

I joined the National School of Drama, and after I graduated, did street theatre in Delhi for four years.

In 2000, I came to Mumbai. Since I was a trained actor, I thought I would get work as soon as I would go to Mumbai. But that didn't happen.

I tried television first. The trend was glossy so I was rejected because of my looks.

Then I tried films, and got small roles. My first role was just 50 seconds in Sarfarosh. I didn't get work for two, three years after that. I would work in crowd scenes in films and ads.

When the camera would turn towards me, I would hide my face because I didn't want people to see me doing such a small role.

Then I got Black Friday -- I had three or four scenes. People noticed me, and said I had done a good job. But the film got banned. I got a few roles, but those films never released. I tried in many, many places, but I always faced rejection for years.

Then the movies started changing, and a lot of festival films were getting made. That's how I got films like Patang, and then Kahaani and Gangs of Wasseypur.

If I hadn't got Wasseypur, people would have given me only character roles. They would not have considered me for lead roles.

GOW broke my mould and changed my career. I got 175 scripts after that film released. I have signed only one from that -- Buddhadev Dasgupta's Anwar Ka Ajab Kissa.

I want only lead roles now.

Do your parents watch your films?

My parents still live in the village. My films don't release there, only C-grade films are shown there. If they want to watch my films, they have to go to Muzaffarnagar. 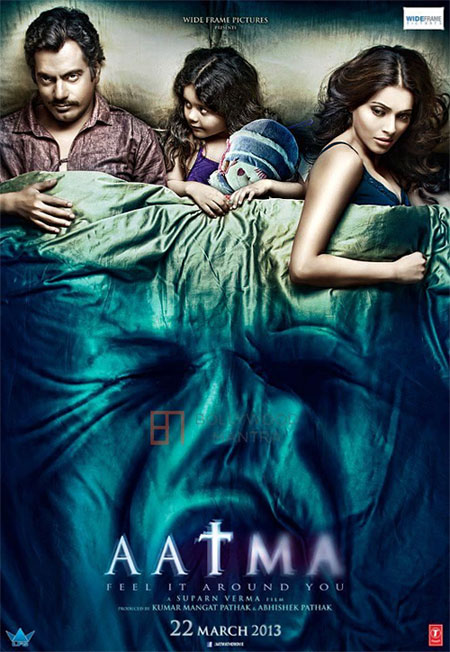 You have won a National Award, so this is obviously one of the highest points in your career. What was the lowest point in your career?

I've had way too many rejections. I was even ready to leave everything and go back. But I couldn't go back because I had been trained as an actor, and acting was the only thing I could do.

Even if I wanted something as ordinary as a cigarette or a lighter, I would have to struggle hard for it. If an ordinary man can get something in his first attempt, it would take me at least 10 attempts to get it.

It took me so long to get my passport made, or even get a gas connection. That has made me very strong and that helps me in my acting. Otherwise, I'm a very darpok (coward) man, someone who always stays in the background. Rejections have made me a very strong man.

I had a friend, who was struggling with me. He literally became mad. That really shook me. But that also saved me because I learnt a lesson through him. I saw him going mad and I didn't want it to happen to me.

I would feel very frustrated that I was a trained actor yet I was doing crowd roles. Sometimes, the actor in the main role would be doing a bad job, and I would look at him from the crowd and feel that I can do better than him. But I didn't have the guts to go from here to there.

First, filmmakers only wanted six feet men, who would be fair or some industrywala baap ka beta. But now this thinking has changed.

'Money would be very hard to come by'

I used to stay in a small room with about four or five guys. The rent would not be much because we would live in flats in the slums.

Money would be very hard to come by. We would have to give half our earnings to junior artist coordinators, who gave us work.

What motivated you to stay on and struggle?

Acting was the only thing I could do. I tried other work too, including working as a waiter. But I would return after a few days.

I got a sense of how things worked in the industry during Black Friday. Anurag Kashyap supported me a lot, and promised to give me work when he would make it big -- he was struggling then as well.

You acted with Aamir Khan in your first film, Sarfarosh, and in your recent film, Talaash. How different was your relationship with him from then to now?

When I told him it was Sarfarosh, he immediately remembered the scene. He stopped the shooting, and announced to everyone that I had done my first film with him.

How did you get Kahaani?

It's happened many times that when people see me in a picture or in a film and then see me in person, they reject me.

I was very scared of rejections so I asked him to see me. Sujoy met me and finalised me immediately. He never commented on my looks. 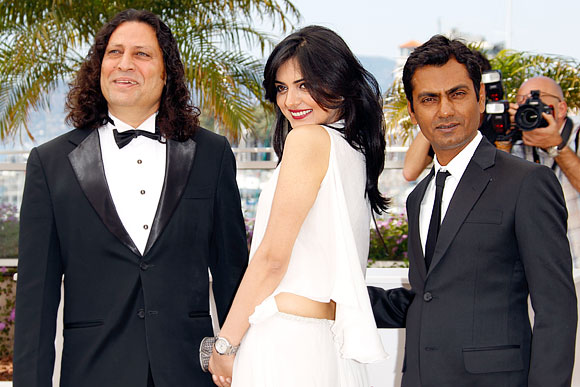 How tough was Wasseypur?

It was a very tough film. I had a Faisal Khan (his character in the film) hangover for months after the shooting was complete.

I used to behave like Faisal Khan even though he's very different from me. In real life, I'm the fattu (scared) type, but Faisal Khan has never known fear.

That film tore down all myths. Jo dabangg ho doesn't have to be a six feet tall man; he can be a thin man as well. He can scare you just as much.

You went to Cannes last year with your film, Miss Lovely. Was that your first trip abroad?

That was my second trip abroad. My first trip abroad was to Chicago, just days before I went to Cannes. (Film critic) Roger Ebert has a festival in Champaign and he had invited me and my film Patang. I was honoured at the festival.

After all this success, what's the one thing you miss about your old life?

I miss going back to my village. It's been a year since I last went there. Whenever I've gone there, I come back refreshed.

I'm reaching a saturation point now and need to take a break and go back home.

'I always take inspiration from real life for all my roles, even if it's a tiny role' 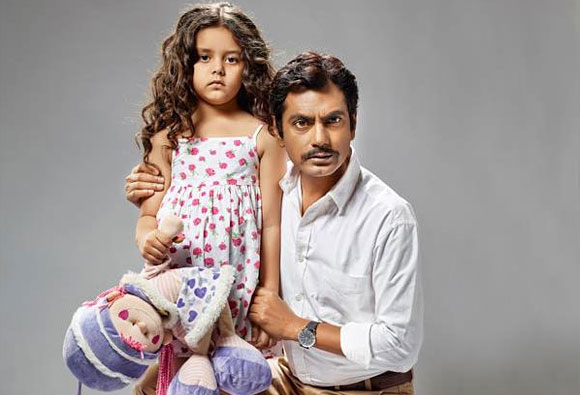 I always take inspiration from real life for all my roles, even if it's a tiny role. Even if I don't have the experience, if I just know that such a character does exist, I love doing it. I try to do characters that are believable.

I cannot relate to fake characters. That's why I can't do formula films because they don't look real.

What's your next film about?

In Anwar Ka Ajab Kissa, I play Anwar, a small-time detective. He's so passionate about his career that if he's sitting here in front of you, he'll start checking on your life, and ask you questions. He goes to such an extreme level that he starts checking on his own life.