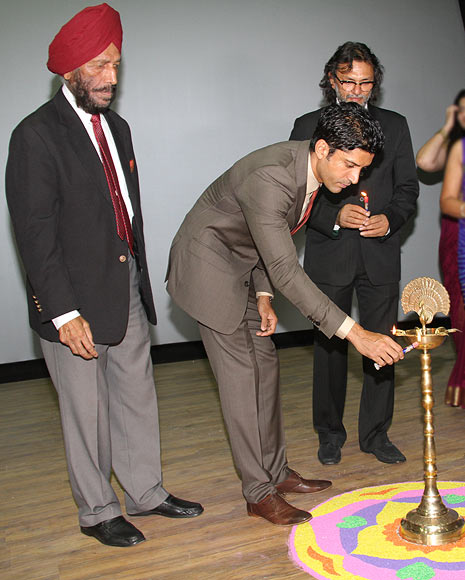 A special screening of Bhaag Milkha Bhaag was held for army men on Thursday in Chandigarh.

The team behind the film -- actors Farhan Akhtar, Sonam Kapoor and Divya Dutta, director Rakeysh Omprakash Mehra and his wife P S Bharathi and lyricist Prasoon Joshi -- were present at the screening. Athlete Milkha Singh, on whom the film is based, was also present.

'I am very impressed with Bhaag Milkha Bhaag' 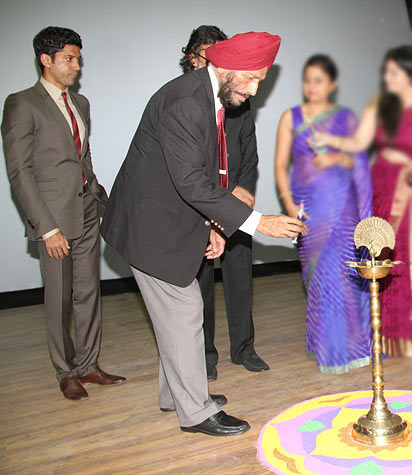 Milkha Singh liked the film so much that he saw it twice within a span of 24 hours.

"I saw the film with my son Jeev and the star cast in London day before yesterday. Then, I saw it again in Chandigarh with other members of the family," said Milkha Singh.

"I am very impressed with the film," he added. "Rakeysh has done a good job, and so has Farhan Akhtar. I hope the film will impress the young boys and girls to emulate my feat and try and bring laurels to the nation."

'The three hour and ten minutes film is entertaining and absorbing' 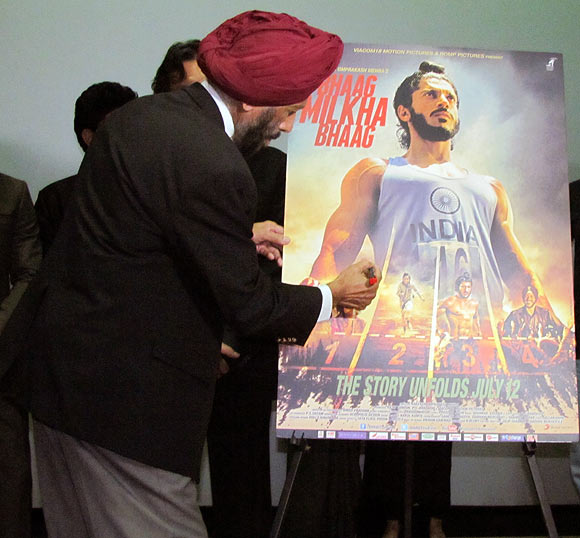 Milkha was nicknamed the 'Flying Sikh' when he ran the 400 meter race under 45 seconds in the 1956 Olympics in West Berlin.

"My life was difficult as I had lost my parents. I joined the army and that is where my journey as an athlete began. Bhaag Milkha Bhaag does not cover every aspect of my life but I cannot blame the makers for that. The three hours and 10 minutes film is entertaining and absorbing," he says. 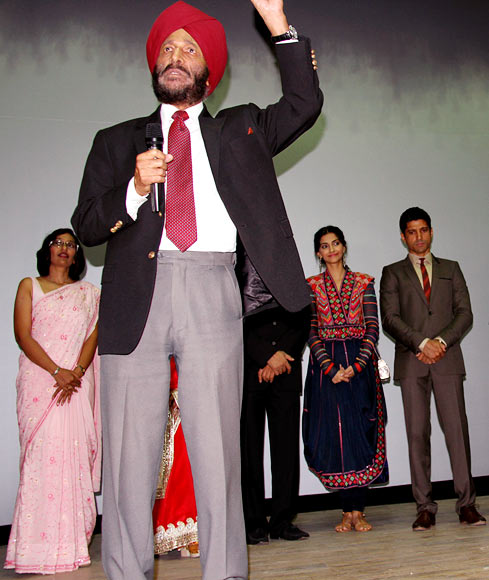 "Milkhaji had a lost childhood," says Rakeysh Omprakash Mehra. "During the Partition, he lost his entire family. The army virtually adopted him. So it was natural that we have the first public screening of Bhaag Milkha Bhaag for the army. We had the screening in Chandigarh on Thursday night in the army cantonment."

The film was screened at the Maneckshaw theatre in the army cantonment.

'They were clapping, laughing and warming up to every moment' 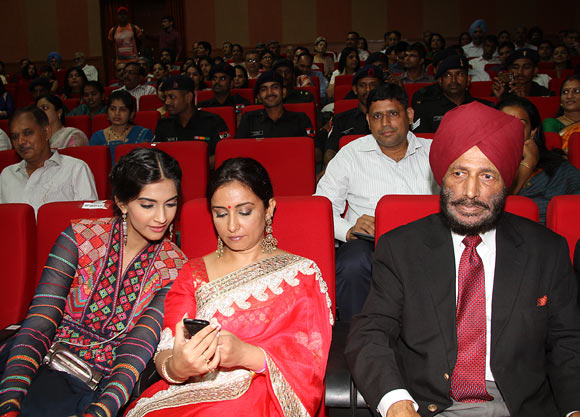 "All the jawaans and their seniors were present, and all of them were in uniform!" Mehra continued. "And what a reception to BMB! They were clapping, laughing and warming up to every moment. They didn't dance because there was no space but it was such a different experience from a formal red-carpet premiere.

"Normally, the army gets to see a film two months after release. Here, they were watching the first public screening. To top it, we beamed the film through to 125 army cantonments across the country.

So army-men in Siliguri, Ladakh, Kalimpong, etc were watching with us. It was a golden moment. I can’t describe the experience. I suddenly realised why I became a movie maker in the first place."

'Chandigarh was where my journey with Milkhaji began' 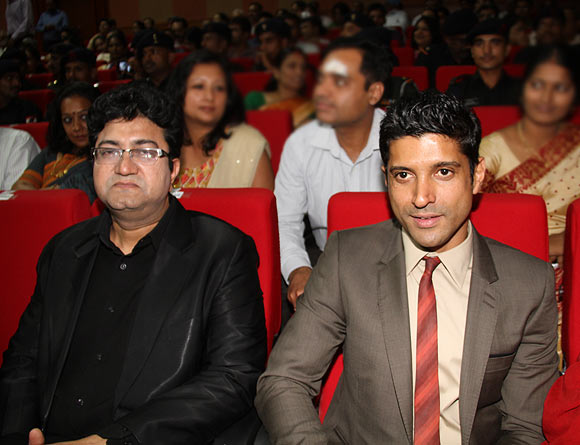 Mehra got very emotional when he said, "Chandigarh was where my journey with Milkhaji began. It was only natural that I go back to Chandigarh. Seeing Milkhaji at the screening for the armymen was an experience I can’t describe in words. At  that moment, it didn’t matter how the film would perform at the box office."

'Milkhaji knew nothing about Aamir or Shah Rukh or Farhan' 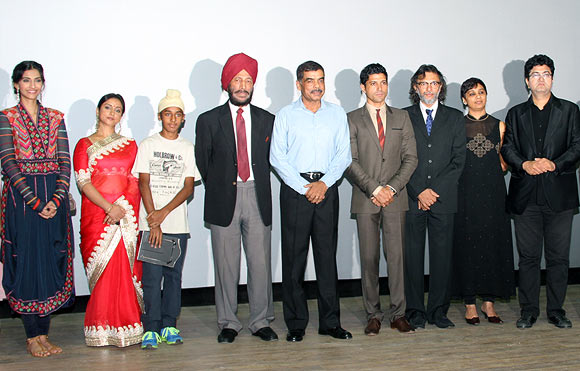 Recalling his first meeting with Milkha Singh, Mehra said, "When I first met Milkhaji four and a half years ago, to ask him to participate in my film, he had not seen a single film in the last 50 years. He knew nothing about me, or even about Aamir or Shah Rukh or Farhan."

'Jeev told his father that if anyone can make a film on Milkhaji, it was Rakeysh Mehra' 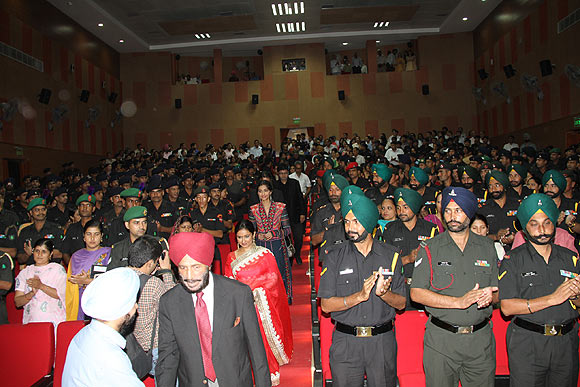 It was Milkha Singh’s son -- golf champ Jeev -- who is the movie buff in the family.

Recalls Mehra fondly, "On Thursday evening in Chandigarh, our journey with Milkhaji had come full circle. Jeev, who travels all over the world with his game, stays connected to his roots by watching one movie per day. Jeev is a huge fan of my film, Rang De Basanti. He told his father that if anyone can make a film on Milkhaji, it was Rakeysh Mehra." 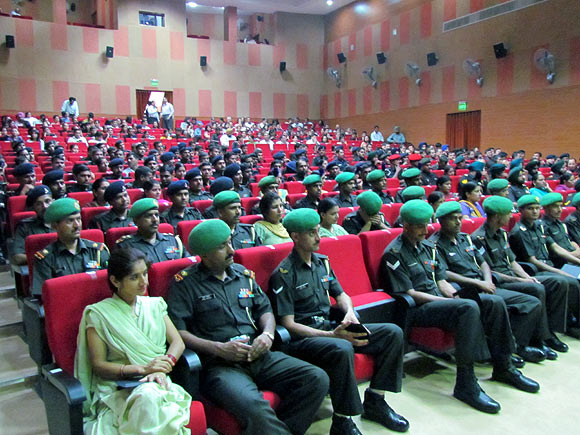 Mehra added, "Milkhaji had many lucrative offers for movie rights to his life story. Without seeing any of my works, he agreed to let me make a film on his life -- that too at a token fee of Re 1. We found a Re 1 note from 1960 (the year he broke the world record in Rome) to pay Milkhaji."