Next
Radhika Rajamani in Hyderabad

Gokul Krishna is having a dream debut as director, helming Yashraj Productions’ maiden entry into the south, Aha Kalyanam.

The Tamil-Telugu remake of Band Baaja Baraat, Aha Kalyanam has Nani and Vaani Kapoor in the lead.

Gokul has been an assistant to director Vishnu Vardhan for four films, namely Arinthum Ariyamalum, Pattiyal, Billa and Sarvam, before he decided to strike out on his own.

In this conversation, Gokul throws light on Aha Kalyanam and directing his maiden film produced by the big banner, Yashraj Productions. 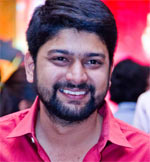 How did you feel when you got the offer from Yashraj Productions to direct the remake of Band Baaja Baraat?

I feel so blessed. It also looked surreal.

Had you seen Band Baaja Baraat before you got the offer?

I saw it by accident the first time. My friend and I were supposed to go for a Tamil film but my friend took me to Band Baaja Baraat instead.
Five minutes into the film, I started liking it.

I met the creative producer of Yashraj, Padam Kumar, once and he mentioned about the remake of Band Baaja Baraat in Tamil.

I thought it would be fresh for South India. I also come from a big South Indian family. So I showed interest and got to do it.

Did you adapt it to suit Tamil-Telugu sensibilities or is it a frame-to-frame remake?

We had to adapt the wedding culture and characterisations.

We felt the essence should be there, so we did not tamper with the major areas. It is close to the original.

What was your experience of directing a Yashraj production?

It was superb. It still feels like a dream. I still don’t believe that I did a film with Yash Raj Productions.

Everything was put on paper before we began, so the work flow and work pace was fast.

Did you have discussions with Aditya Chopra?

I met him a couple of times before the shoot and then during the test shoot of Nani.

He told me he was expecting a good film from me. He had a benchmark and I had to meet his expectations. He also told me to get ready to go on the floors.

Did you tell him about the adaptations you had made?

I gave him a gist of the changes and he was okay with them.

I have to thank Yash Raj Productions and Padam Kumar for giving me the freedom. There was not that much interaction with Adi as he was in Mumbai and we shot in Chennai.

Did you interact with Maneesh Sharma, the director of Band Baaja Baraat?

No. I wanted to, but he was busy with Shuddh Desi Romance.

'I couldn't have asked for a better lead cast'

How was it working with Nani and Vaani?

I couldn't have asked for a better lead cast. Both were hard working.

Vaani spent one month and put in super effort to learn the language. She would not take prompting.

Nani was familiar with the language. He dubbed his own lines in the film. The interest level of both of them was super.

Are you happy with the way the film has shaped up?

Yeah. I am very happy. The production house is also satisfied and happy.

Could you tell us about the experience of shooting Aha Kalyanam?

Shooting was fun. The average age of the cast and crew was 24-25. We were all like friends.

It was like going to a wedding every day.

If the assistant directors were busy, Nani would even give the clap himself! There was no ego.

There is a song sequence which shows 23 different weddings of South India, from Mudaliar, to Brahmanical to cross-cultural set-ups. On seeing this, people may feel that they can do a wedding like this too.

Did you research the film?

Yes, we did lots of research. Detailing of every culture was done after meeting the pundits.

We considered 300-350 titles before we zeroed in on Aha Kalyanam.

There is a song where the lyrics are punch dialogues. So we did research for that too.

Is the film mainly shot in Chennai?

Yes, it was shot mainly in Chennai with a bit in Mysore.

Are you nervous as the release date is near?

I am excited and looking forward to it. It has not sunk in yet. The tension will start at 11 am on Friday.

As of now I have not thought about it. I am waiting for the release of Aha Kalyanam.