After the well-received Gehraiyaan, Deepika Padukone has moved on to her next project.

Apparently, she will now produce a bio-pic on her father, badminton legend Prakash Padukone.

Prakash Padukone was the first Indian to win the All England title, the top-most championship in badminton, in 1980.

And who better qualified to play him than his son-in-law, the very talented Ranveer Singh?

Firstly, Ranveer is known to the subject of the bio-pic and has studied Prakash Padukone from close quarters.

Secondly, Ranveer has proved himself in the bio-pic genre, first in Sanjay Leela Bhansali's historical Bajirao Mastani and then in Kabir Khan's '83, where he played cricket legend Kapil Dev with marvelous conviction.

Whether he will play the badminton legend, who is also his father-in-law, remains to be seen. 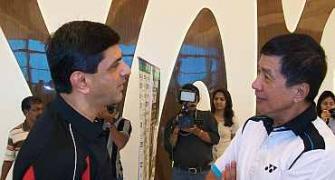