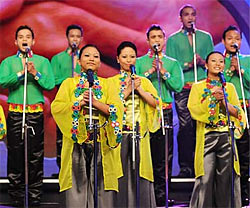 The Shillong Chamber Choir will enthral fans once again when they sing along side Amitabh Bachchan at the opening of the season six of Kaun Banega Crorepati on September 7.

"The Shillong Chamber Choir will be singing in the opening episode of Kaun Banega Crorepati on Friday on Sony channel," Damon Lyndem, an official of the choir, told PTI.

The megastar will be singing with the choir on a medley of songs, arranged by Neil Nongkynrih, the choir's founder and conductor.

During the preliminary practice sessions that the choir group and Bachchan had, Lyndem claimed Bachchan was impressed at the performance of the team.

"By far, the most delightful moment of the day was meeting and seeing the Shillong Choir, a young group of boys and girls from the North East, performing some wonderful renditions of  ahah  cannot disclose all that just yet, songs," Bachchan said in his blog.

Founded in 2001, the Shillong Chamber Choir shot to fame after it won the reality talent show, India's Got Talent (Season 2) in October 2010, on Colors, where it performed western chorals, as well as choral-style revamps of Hindi film classics. 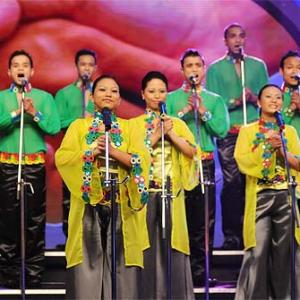 India's Got Talent champs to sing for Obama