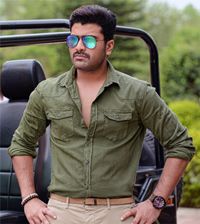 Sharwanand, who has done films which are hatke from the mainstream cinema like Gamyam, Prasthanam and Amma Cheppindi, has started working on his 25th film wherein he will play a police officer.

The film's cast, including lead actress Lavanya Tripathi, has already wrapped up the first schedule.

BVSN Prasad, who is producing this film, said that Sharwa has not appeared in a role like this before and that this film will appeal to all sections of the audience.

Karthik Ghattameneni is the cinematographer.

A new star is born The Telugu film Gentleman opened to good reviews and revenues on Friday. In fact, the revenue is the highest in Nani's career.

The film carried a good buzz even before its release, thanks to the fact that Nani reunites with Mohanakrishna after their 2008 hit collaboration inAshta Chamma.

But there is someone else who is being talked about since the film’s release: Nivedha Thomas, one of its heroines. Thomas hails from Kerala and makes her debut in the Telugu industry with Gentleman.

Everyone has been praising her beauty and acting talent, and she is even being compared to Nithya Menen, also from Kerala.

Well, Nivedha has already picked up Telugu and she will surely be flooded with offers in the near future.

Vaisakham, the first Telugu film to be shot in Kazakhstan Director B Jaya is back with her new film Vaisakham, starring debutante actor Hari and Avantika Mishra, who acted in Neelakantha’s Maaya.

Jaya is known for her orchestration of songs onscreen and its picturesque locales.

For Vaisakham, Jaya chose Kazakhstan to shoot two songs. This is the first Telugu film to be shot in the country.

Shot under challenging conditions of sub-zero temperatures and language barriers, the budget of Vaisakham has been enhanced to make a good product which also includes usage of robotics!

Valisetty Venkata Subbarao has captured the beauty of Kazakhstan on camera while DJ Vasanth has composed the music.