'Ranveer Singh is very lively on the sets. You don't feel the pressure when he's there.' The answer lies with his writer, Prakash Kapadia, and he explains it here.

Kapadia looks back at the films they've made together, from Devdas to Gangubai Kathiawadi in the second part of a lively interview with Patcy N/Rediff.com.

How do Bhansali and you decide on the next film?

It is his suggestion because he thinks like a director as well as the producer. He has a better understanding of these things.

If I think, I will decide just based on the subject.

But he knows whether it's the right time to make it, whether we will get right casting, whether we will be able to generate money to make the film, if a corporate joins the film, what will be their opinion...he thinks of all this.

Which is your favourite Bhansali film?

It is yet to come. 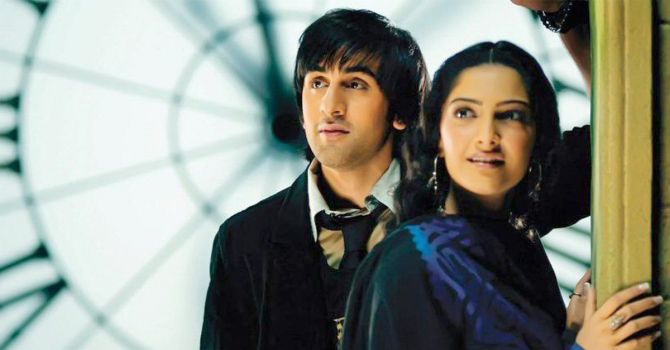 You started working with Bhansali after Khamoshi and Hum Dil De Chuke Sanam. You did not work on Guzaarish and Goliyon Ki Raas Leela: Raam Leela. Why?

Sawaariya did not do well.

The next film was not finalised, it was taking time and I needed money.

I can't ask him (Bhansali) to pay my bills every month.

I get paid for whatever I work I do.

And as you know, the writer puts as much time as the director, but the pay is not high.

My son was studying at Symbiosis and it was a difficult period for me.

So I did television series like Buddha, Gulaal and the Marathi film Ghar Shrimantacha.

Bhansali allowed me to carry on with that work even though we had started Guzaarish together at the beginning.

You have never worked on a film produced by him and not directed by him, like Mary Kom, My Friend Pinto, Rowdy Rathore, Shirin Farhad Ki Toh Nikal Padi, Laal Ishq, Malal.

He wants me to write only for him.

Plus, I like working on films and subjects that he makes. You have immense respect for Amitabh Bachchan and Ranveer Singh.

When I worked with Amitabh Bachchan in Black, I was very happy.

Everyone from all over India wants to work with him and I got the chance.

No doubt he is a great actor, but the reason I liked working with him was that when he is works on a Hindi film, he asks for the script in Hindi.

I write in Hindi, and then someone types it in English and give it to the actors to learn their dialogues.

So I liked that he reads his dialogues in Hindi.

The second reason is that if he makes even a small change in the script, he asks the writer for his permission.

Like, when we were shooting for Black, there is a scene where Amitabh gets angry with Rani's (Mukerji) character Michelle.

In the dialogues that I had written, there was no anger sequence. He just tells Michelle, 'Tumhare dimaag mein kuch nahi jaata.'

Amitji asked me if he could add anger to the scene.

I told him he doesn't need to ask me.

He said, 'You have written it, so I need your permission to change it.'

I was very pleased by that.

Ranveer Singh is very lively on the sets. You don't feel the pressure when he's there.

Normally, sets have an intense atmosphere, with everyone running about and shouting.

Writing on the sets is not easy.

But Ranveer lightens the atmosphere.

His working style is different.

He shuts himself in a room to understand to get into the skin of the character.

When I narrate a script to the actor, I don't want anyone in the room.

Sanjaybhai gives me that freedom. I can narrate to the star and then he comes inside the room once it is done.

When I first narrated a script to Ranveer for 135 minutes, I asked him how he liked it.

He said, let's not talk, just sit in this room.

He wanted to absorb everything he heard.

Tell us about your next project Baiju Bawra.

I have completed the first draft. I need time to sit with Sanjaybhai and narrate it to him, but he is busy with Heeramandi.

The casting is not fixed, but Ranveer and Alia's names keep popping up. My grandfather was from Gandhiji's village, Ghodbhunder. He came to Mumbai and we settled here.

I took part in drama in school.

My friend's father was in the Indian National Theatre, so I would watch plays.

My uncle owned a library. There were a lot of Gujarati books and English novels translated in Gujarati, so I got to read a lot.

After college, I joined IPTA (Indian People's Theatre Association). I have participated in their competitions.

I have won the K A Abbas trophy for three years for my writing.

I won the Munshi trophy a lot of times too.

My father was my strength. He would wake up at 5 am, make tea for me and listen to the scene I had written.

Whenever I left for work, he would climb down four floors to see me off; we don't have an elevator.

I still have not earned enough to afford a house with a lift.

After graduating, writing plays would not earn me enough money.

I thought I would not be able to do a 9 to 5 salaried job, so I started making washing powder.

I also worked at a friend's factory where they made diamond tools.

From Bhuleshwar (south Mumbai), we shifted to Vashi (Navi Mumbai).

In 2002, I left that because I started writing as a full-time job.

How did you start writing for films?

Dariya Chhoru was the first film in Gujarati that I wrote; the producer and actors were my friends so we decided to make a film.

I got the confidence to write a film because of Shafi Inamdar.

I was writing a play called Chakravarti for him, on which Dariya Chhoru is based. When I read out a few scenes from the play to Shafi Inamdar, he told me this is not a play, this is a film.

So later, we adapted it into a film. The movie was good, but we didn't make money.

JD Majethia was my college friend. He was the hero of the film. He kept a trial show where he invited Sanjay Leela Bhansali.

Bhansali was a busy man then -- his film Hum Dil De Chuke Sanam had completed 100 days -- so he said he would come for some time and leave.

But he loved it and saw the entire film.

Bhansali and I belong to the same caste. In fact, we have lived in the same area in Bhuleshwar, but did not know each other.

Our fathers knew each other, they were gym buddies.

Anyway, he later called me to his office.

He wanted me to write Dariya Chhoru in Hindi, but for some reason, it did not happen.

He asked me to write Devdas. When Bhansali offered you such a magnum opus with stars like Shah Rukh Khan, Aishwarya Rai Bachchan and Madhuri Dixit, were you nervous?

Shah Rukh Khan was the life on the sets.

He brought energy on the sets.

He likes story, drama, huge sets and grandeur, which I was bringing to the film.

After the day's shoot, he would ask me, 'Kal ka scene kya hai?' and would make me narrate it and do a rehearsal.

I would love that.

When a film like Bajirao Mastani gets stuck for 12 years, does it get frustrating?

I was very frustrated.

I thought if we don't do it now, would it work later?

A lot of people approached me for the script, but my principles didn't allow me to give anyone else.

I wrote a film for Ravi Chopra, but he fell sick and passed away. Are you paid well now?

I live in Vashi out of choice.

I sold the 1,000 square feet house in Bhuleshwar.

People have started understanding the worth of the writer, that he is the first person who starts on a blank page.

Narration is not an easy job; you have to keep a person engrossed for two hours.

We are getting paid better now. 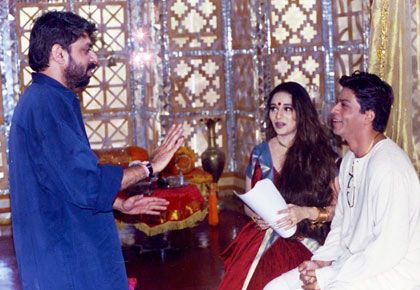