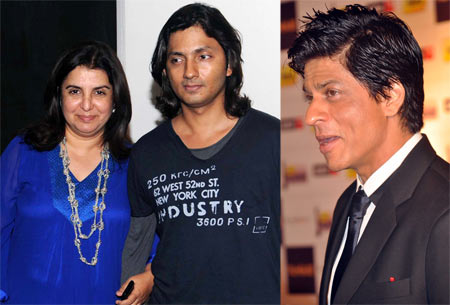 Shirish Kunder and Farah Khan went to Shah Rukh Khan's home at Mannat on Tuesday evening and patched up.

The truce was negotiated by Farah's brother, Sajid Khan and producer Sajid Nadiadwala.

The duo called Shahrukh and Gauri Khan in the morning and fixed up a time with Farah and Shirish and went together for the meeting.

"Shah Rukh and I have sorted out our differences and our relationship has become stronger," Kunder told us adding, somewhat strangely, "No one knows what actually happened. Everyone is giving their own versions of the story."

"Such things happen in parties," he said, "We all were drunk and

high and so we got into arguments. We sat down, chatted and spoke whatever was there (sic) in our hearts. We have sorted everything for good."

Kunder insisted that things were fine not only 'between SRK and Gauri and me but also between Farah and SRK'.

"We were at Mannat for (almost) three hours and we laughed and cried. And I am grateful that my brother Sajid Khan intervened along with Sajid Nadiadwala and ended this (fight)," Farah Khan was quoted telling a television channel.

The most talked-about scuffles of Shah Rukh Khan