'What they saw in Bigg Boss was not me.' 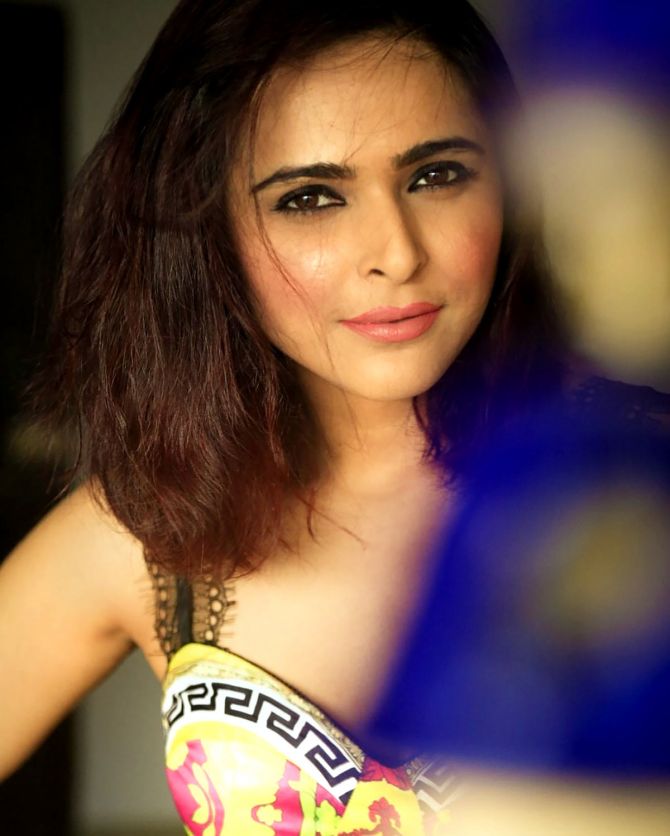 Madhurima Tuli, last seen in Bigg Boss 13, takes up a pivotal role in the Web series Avrodh: The Siege Within, streaming on SonyLIV.

"Sometimes you have to wait for your time to come and I think for an actor, patience is very important. I hope Avrodh brings that to me," Madhurima tells Rediff.com Contributor Rajul Hegde.

Do you think OTT is a blessing for actors since it has such good content?

It's a blessing for everyone in the industry.

So many actors, who have got an opportunity to perform on OTT, are now doing films.

And for many directors, the content that cannot be shown in films can be shown in Web series.

Now, we can sit at home and watch shows and films, so it's a great platform to be in. I think it has a bright future. Were you nervous about playing a journalist in Avrodh?

Definitely. Reporting is not an easy job at all.

I had to look convincing as a journalist.

There are so many journalists in our country who might judge me if I am not doing the job right.

My character is a senior reporter and she has to be sure of what she is doing. It was tricky, but I had a great time asking questions to people.

I watched a lot of news channels.

I saw how the media reported and how people would talk to them.

I imbibed all the nuances and played it accordingly.

Journalists are normal human beings, the only issue is that they sometimes cross the line.

My character in the show also crosses the line and you will see how she manages the situation.

There is a message also here for journalists that you should not cross the line.

Think about the sensitivity of the situation and then ask questions.

A surgical strike is secretive. If any news comes out before the operation, it can become critical and the whole operation can fail.

And in a mission like a surgical strike, you need to have faith in the people who are making decisions for us. They are making it for the betterment of the country. Had you ever thought of being a journalist before entering the glamour industry?

Yeah, I thought of being an anchor.

Being a journalist is a difficult job because you need to be aware of current affairs, day to day news and have knowledge of whichever beat you're covering.

You have to be ready to hear the criticism.

You have to be ready to get fired anytime because if you give wrong information to the public, you are fired and your life is threatened.

So you have to be really careful and very sensitive.

I salute all the journalists for withstanding the immense amount of pressure.

Hats off to the journalists who wait for hours for just one interview of a politician or actor.

It's a very difficult job to do.

But now, there's so much negative news that I feel depressed watching it.

I prefer knowing the headlines and the main points of the events.

My parents watch a lot of news, so I get updated through them. How was it working with Amit Sadh and Neeraj Kabir?

I didn't get to work much with Amit, just a day's shoot.

He is a brilliant actor and an amazing human being.

While working, he is always in character. He doesn't leave the character even once.

You could actually feel an army officer standing next to you.

The way he has portrayed it was so real.

Neeraj sir is a teacher and I am a big fan of his work.

Performing with him was fantastic. The way we had conversations together, they came out so naturally.

Hopefully, the audience will notice it.

How is life after Bigg Boss 13?

Life after Bigg Boss has been in lockdown.

I did get a good response; people loved and hated me.

I don't blame them, but I hope after this show, it changes.

What they saw in Bigg Boss was not me.

It was the situation that made me react in that manner.

You make mistakes and learn from it.

Other than that, people have showed me lot of love. Do you regret hitting your former boyfriend Vishal Singh with a frying pan in Bigg Boss?

No. It happened in the spur of a moment.

I think it's normal that you fight with your friends, siblings and boyfriends.

Boyfriends and husbands would be your best friend, right?

Are you in touch with Vishal?

Yes. He congratulated me for this show.

You have done films, short films, television and Web series, but they have been more of cameos or the hero's wife. Are you happy with the roles you are getting?

I would love to play a main lead.

I have enjoyed playing the main lead in Chandrakanta.

In Baby, I was one of the main leads.

I am happy with the work I've done.

Sometimes you have to wait for your time to come and I think for an actor, patience is very important.

I hope Avrodh brings that to me.

Earlier, I would not refuse cameos if they came from a big production house, but now I am careful about what I choose.

I am an athlete and would love to play one on the big screen.

Also, try my hand at comedy.

There are many Bollywood actors who I like to work with, but Salman Khan is my all-time favorite. He has an amazing soul too.