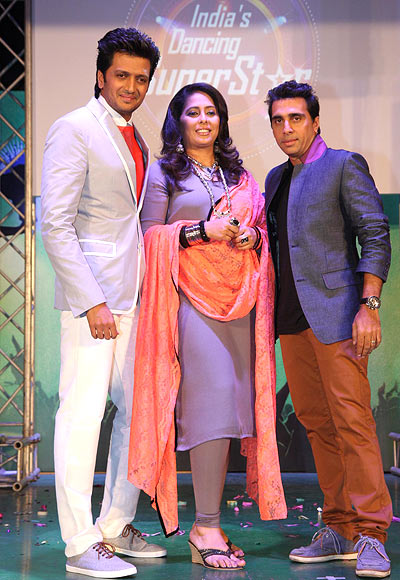 Riteish Deshmukh will make his television debut with Star Plus’s dance reality show India's Dancing Superstars, which premieres on April 27 at 9 pm on Star Plus.

“I made my film debut 10 years ago and now through this reality show, I am making my television debut,” says the actor, who is well known for playing comic roles on the big screen.

So why did it take so long for him to appear on the small screen? Riteish says, “It is wrong to call it the small screen. In terms of reach, there is no bigger screen than television.”

He said the TV offer came during a break from his film making commitments.

“I loved the concept. There are times when you feel things are right. I have a great comfort level with my co-judge Geeta Kapoor as I have worked with her in films. And Ashley Lobo (the other judge) is a fantastic person. I think this is the right time to do a TV show. So I was quite excited,” he says.

What does he watch on television?

“Whenever I get time, I flip channels. I love dancing, enjoy watching dance shows and comedy shows. I have been a guest judge on comedy shows several times.”

He admits he's 'not a great dancer but I dance from my heart' and will be on the lookout for people who do the same.

“I will be looking at the entertainment factor in all the performances and if an act is entertaining enough, I will be happy. I will try to bring whatever I have learnt in the past 10 years of my career from various choreographers to this show. Also, I will represent the person watching TV at home, on the judge's panel.”

learnt dance looking at Mithun Chakraborty. I like Govinda as a performer. His film Aankhen was too good.”

As for his favourite form of dancing, he jokes, “I dance from my heart; it sometimes looks like western and sometimes like tapoori.”

The actor admits that television work is challenging. “Television is challenging and working for 12 hours without a break is something commendable. The film making process on the other hand is more relaxed. On TV there is a deadline that you have to meet. I am happy that I have a good team and there is time precision so it's really great to be working with them.”

The buzz is that Riteish and politician Narayan Rane’s son, Nitesh, are coming together to produce the Marathi version of the popular reality show Bigg Boss. But Riteish says, “It is too premature to talk about Marathi Bigg Boss.”

Rumour has it that he will also host BB, but he refuses to be drawn out on this. “It is in the regional space. We will talk about it when anything concrete happens,” he said.

Asked if he is planning to produce any remakes in Marathi after his successful maiden production venture in Marathi, Balak Palak, he replied, “I am working on a Marathi film in Hindi, Balak Palak. I support remakes. Because of that I am here. My debut film was a remake.”

He said he has started shooting for a Marathi film, Lai Bhaari, directed by Nishikant Kamat. “I think by end of June the film should be over.”

Riteish next big screen appearance will be in Sajid Khan’s comedy with Saif Ali Khan and Jacqueline Fernandez.