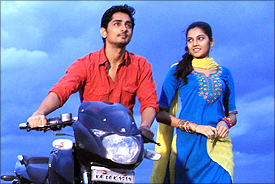 With a script by National Award winning director Vetrimaaran, Udhayam NH4 had all the makings of a great movie. And though Vetrimaaran has not directed this film, he has not let down his fans.

Manimaran, his former associate and long-time friend, who had assisted him on blockbuster films such as Polladhavan and Aadukalam, makes his debut as director with Udhayam NH4.

Manimaran has done full justice to the script and has definitely not let his mentor down.

Udhayam NH4 has Siddharth and newcomer Ashrita Shetty in the lead roles. Kay Kay Menon plays a prominent role in the movie.

Vetrimaaran’s scripts usually revolve around ordinary subjects with extraordinary twists and turns. Just as the Ventrimaaran- scripted Polladhavan revolved around a stolen bike, and Aadukalam around rooster fights, Udhayam NH4 is centred on National Highway 4, which is the shortest and most popular route between Chennai and Bangalore.

The movie starts and ends at the highway and most of the other scenes, as well as songs are shot as flashbacks narrated by the various characters of the film.

The film opens with Prabhu (Siddharth) and his friends discussing the possible escape routes between Chennai and Bangalore. The scene then changes to a college in Bangalore, where Ritika (Ashrita Shetty) has just finished her last exam.

Though she is escorted by bodyguards, Prabhu and his friends manage to whisk her away. Ritika's father, who is a famous local politician hires encounter specialist Manoj Menon (Kay Kay Menon) to bring back his daughter and alleges that she has been kidnapped by Prabhu.

As the story unfolds, Manoj Menon learns through his investigation that Ritika has not been kidnapped, but has willingly gone with Prabhu. Another important fact he learns is that it is the eve of her birthday, and she will turn 18 the next day, which allows her the freedom to choose her partner.

Thus begins the race against time, with Ritika’s father wanting her back before 12 midnight, and Prabhu wanting her to stay away till then.

Siddharth’s female fans whistled away at the theatre shouting ‘We love you Siddharth!’ almost every time he appeared on the screen.

Siddharth has given a very mature, yet understated performance; there are no undue theatrics and even the fight sequences have been shot realistically.

Though there is no separate track for comedy in the film, the director has managed to inject humour through Siddharth’s friends, who keep us entertained.

Newcomer Ashrita Shetty has also given a good performance. With her girl next door looks and sweet innocent smile, she suits the role as a simple, naïve college girl.

And of course there is Kay Kay Menon, who is known for his intense performances. He has been given quite a meaty role; in fact the role seems to be tailor-made for him. Truly a great performance by a great actor.

Music by G V Prakash is an absolute delight. Every song has its own unique flavour and is quite entertaining.

The soft melody, Yaaro Ivan by the soon-to-be-wed couple G V Prakash & Saindhavi and Maalai Pon Maalai by Bela Shende and SPB Charan are both immensely enjoyable and are rocking the charts. Ora Kannala, which has been written and sung by Gana Bala is a typical Tamil Gana song and does not fall far behind.

Manimaran has undoubtedly capitalised on an excellent script by Vetrimaaran, and the result is a racy entertainer that keeps you glued to the screen.

Definitely a fun way to kickstart your summer and a must-watch. Udhayam NH 4 is a romantic thriller 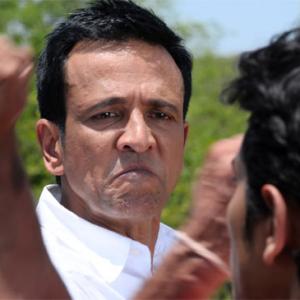