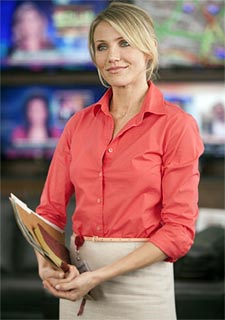 I almost feel obligated to say that I have enjoyed filmmaker Michel Gondry's work. I think his Eternal Sunshine of the Spotless Mind is an amazing film about love and loss and the role of memory in how people cope with a broken heart.

I was so impressed by his repertoire as a music video director that I bought the first DVD collection of his work. Generally speaking, I also like Seth Rogen. He is rude, crude and periodically funny. Oh yes, and I also like 3D.

Now all of this should have meant that The Green Hornet would play like a dream for me. Unfortunately this dream turned into a nightmare very early on. A perfunctory scene about a broken toy is supposed to define that the leading man was a neglected child whose father did not see his potential for heroism?

A villain with a (ridiculous) double-barreled hand gun who is concerned that the citizens do not find him intimidating enough? A coffee-brewing, gadget-building Asian dude who appears by the leading man's side and readily goes to work for him even though he is unlikable and insensitive? I could go on, but what would be the point?

Mr Gondry makes quirky movies and quirkier music videos. As viewers will soon find out, that quirky vision doesn't necessarily translate well in a big budget environment -- especially one where Seth Rogen keeps talking almost non-stop but never says one (even remotely) funny thing. Sound brutal? You have no idea!

Did nobody at the studio think to send Mr Rogen (who also co-wrote this movie) a memo that he is the good guy, and must therefore be likable on some level? I would love to tell you that the jokes fall flat but the truth is there are no jokes in this movie.

Jay Chou, the guy who plays Kato, also talks entirely way too much. His character may be a decent martial artist, and some sort of tech wizard but whether real or manufactured (for the benefit of American audiences) his accent makes it difficult for us to understand even the simplest things he says.

Why is Cameron Diaz in this movie? Unclear. 3D does not flatter her and she looks like she has spent way too much time in the gym. What is the point of the scene where she declares that she is thirty six years old? Is the audience supposed to comment on how good she looks for thirty six? I don't know because I was too distracted by the way her tan looked in 3D. 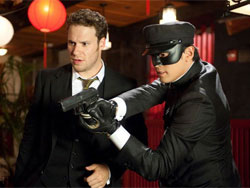 And finally Christoph Waltz; the man may never be able to exceed his last role as Col Hans Landa in Quentin Tarantino's historial rewrite Inglourious Basterds. Especially if he continues to accept villainous roles so ridiculous that most daytime soap shenanigans seem more intimidating by comparison. A joke about how difficult his name is to pronounce? Really?

Mr Gondry has always been a visual stylist so the film does offer glimpses of visual flair -- like the early scenes of the film bring to mind the "3D" postcards of yore. Also, during a split-screen scene the added dimension offers a slightly trippy experience.

Still, these are mere cherries adorning a cake baked out of wood shavings. Hornets are supposed to sting but I am afraid this Green Hornet merely stinks. Watch it at your own peril.