Review: The Dirty Picture is Vidya Balan's show all the way 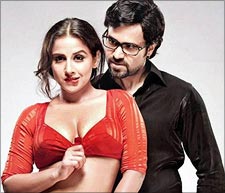 The Dirty Picture forsakes much potential nuance in its urge to please crowds but is still far more engaging than most Bollywood produce, Raja Sen writes.

From lactation to leering to simply being the best pillows imaginable, breasts matter and, as the people behind The Dirty Picture are well aware, they mesmerise. And thus does leading lady Vidya Balan's bosom go through a lot in the name of entertainment, entertainment and entertainment. For mere visual sake, her breasts are lifted and shoved and enhanced and amplified and constricted and meshed together and accentuated, and finally end up doing more push-ups than Rocky in a training montage.

And while doubtless distracting, this could well be called a tawdry piece of exploitative cinema if the heroine wasn't herself revelling in this celebration of boobage. Balan's heroine Silk -- who bears only a chronological resemblance to 80s icon Silk Smitha -- is a highly empowered woman who is tremendously aware of the power her orbs wield. She does what she does -- offer herself up on a big screen platter, an all-you-can-ogle buffet for carnally famished frontbenchers -- simply because she loves it. She feeds off the attention, the control, the adulation and the sizzle of the spotlight.

Balan exultantly runs with it, making the character her own with remarkable commitment to the role. There is no vulgarity -- even when she writhes awkwardly and desperately around a whip -- simply because Balan visibly chooses to have a helluva time. She might not match the legend whose name she's borrowed in terms of sheer screen raunch, but outdoes her with an assault of unashamed oomph. Vanity is disregarded early on as we see the actress' paunch rolling over her waistline, even when she's at her hottest, and later, as her gut barrels out of shape and yet she continues to wear midriff-baring tops, we see just how defiantly unapologetic she is.

The film too is defiant, but in more juvenile fashion. Director Milan Luthria's approach to this heroic harlot is a masala one, and in its urge to please crowds, forsakes much potential nuance that could have made this a great film instead of merely a film with a great lead character. There is a surfeit of cartoonish sound effects and annoyingly convoluted lines of dialogue; the storyline settles into predictability halfway through, and never bothers to thrill again; and the one flagbearer for cerebral cinema -- an impressive and subdued Emraan Hashmi, playing an artistic filmmaker who dresses in what looks like black vinyl -- sells out promptly enough to become yet another ludicrous star. It is as if, in its rabid defense of formulaic masala, the film condemns any manner of cinema not subscribing to the bums-on-seats credo -- and so strong is this unwarranted shunning of the sensible, as it runs like a theme through this film, that it makes The Dirty Picture appear not just insecure but fairly shaky. Pity.

Having said that, the film is far more engaging than most Bollywood produce. And it's not just the bosom. Naseeruddin Shah plays a larger-than-life movie star with infectious glee, grotesque neck-skin folds never quelling his mojo. It's a caricature, but Shah squeezes in much lovely detail, from a genteel sense of the proper (if only in front of the flashbulbs) to a foppishly detailed prescience about action cinema of the 80s. His genius is a curse, he claims with extreme world-weariness, and the effect is delightful. Tushar Kapoor, rather less effectively, plays his younger brother, a timid writer who wears cardigans that fit like muscle t-shirts with a gold chain dangling out front. And both brothers want the girl, for this is her film.

Silk, who turns men into worms. Silk, who cries when spurned away by casting directors and propositioned by sleazy men in movie theaters, but Silk who holds tightly on to the scraps of money they toss her way. Silk, who knows what she has is currency and doesn't mind cashing in her chips. Silk, who has enough sass to shut a Stardust editor up and -- with one rather unforgettable scene -- even turn her into a fan. Silk, arrogant and self-absorbed and ruthless and brash. Silk, who sits in the cheap seats and beams with incredulous, childish joy as she watches her screen version turn them on.

It's a very demanding part, and Balan shows that she's worthy of both wolf-whistles and applause. It's a dazzling performance -- and a remarkably brave one, considering we live in a country so cinematically repressed that an actress wearing a bikini top in her next film is worthy of page one in every national daily. Constantly convincing, Balan proves so dynamic that she even makes her parts of the tinny SalimJaved-lite dialogues work. There is a lot of talk of legitimizing the lewd and the hypocrisy of audiences and critics, and Balan might as well be talking about herself in this film, and not Silk, and she delivers the lines in fiery style. She's a treat.

The film has a nice period-but-glossy texture, and works breezily enough. The first half is a cracker, with Balan approaching both notoriety and pin-up glory, and then, halfway down the second, when approaching Silk's fall, it fizzles out very weakly indeed. There are several possible reasons why a woman like Silk could burn out -- younger and sexier competition, a drinking problem, disastrous commercial and romantic choices -- and while the film alludes fleetingly to these, it chooses instead to keep showing us that Silk's put on some weight. There are long and painfully elongated shots of Balan, her cheeks stuffed Brandoistically, looking into mirrors and gasping. Her entire downfall is thus made trivial, the story of a woman who chose suicide over a treadmill. Sigh.

Yes, there's much to nitpick about, especially that whimper of an ending and much, much squandered potential. But, with the exception of Kapoor, it's mostly well acted: Hashmi and Shah keep things interesting, Anju Mahendroo makes us wish the journalist had more to do, and Rajesh Pratap is always super. Also, the film does push the envelope, Luthria keeps the pace snappy except for the last half-hour, and like any schoolboy would attest, pretty much anything can be forgiven if the breasts look good enough. They do, and Vidya Balan ensures we notice that there's a heart of a heroine thumping energetically away right behind them. It's a performance to be grateful for.