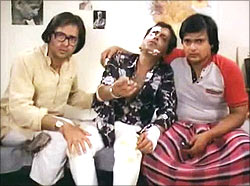 There is a scene in Sai Paranjpye’s Chashme Buddoor where Farooq Shaikh and Deepti Naval are on their first date.

Despite coffee and tutti-frutti ice-cream, and her cooing enthusiasm for him studying Economics, there isn’t much to really talk about.

And the shy Shaikh sheepishly confesses to have stalked her, to lurking outside her music school based on timings she’d let slip when they last met. Biting her lip, Naval grins that the reason she’d spoken of her schedule in such detail was precisely that he may notice. They laugh in awkward relief, instantly and acutely aware of having both acted on the same impulse.

It is a simple scene and yet -- as can be said for a majority of Paranjpye’s cinema -- within it lies a masterclass. Shaikh’s Siddharth Parashar is endearingly guileless, baring his first-ever gambit because it comes unnaturally to him, and because he’d rather not lie to the first girl he’s ever struck up conversation with, but also because he is, funnily enough, proud of his effort.

It all shows in Shaikh’s grin as he looks away from her. Meanwhile, there is a joyous giddiness to Naval’s Neha, a girl only too glad to express her gladness. She’s flattered, thrilled, and positively glowing as she eases his confession with hers, following which he expansively orders more coffee and ice-cream, markedly more confident as he overrides her protestations.

It is an exquisite piece of acting naturalism, one of the finest of them all. And the writing is flawless.

Chashme Buddoor, digitally remastered and brought to screens in a spanking new version, might have needed the cinematic scrubbing but remains a film glorying another time. 1981. A time when 500 rupees went a really long way and cigarette companies merely wanted you to relax.

A time when posting pictures on one’s wall was a very literal activity (and a striking Shabana Azmi was a pin-up girl). A time when a character’s parents lived or vacationed in Nairobi. And a time when it seemed appropriate to shoot green and lovely Delhi with an uncynical, tender eye.

As time-capsules go, it’s one of the best and brightest. Chashme Buddoor is a masterpiece, and even 32 years after it first came out, I can safely declare that this is the best Hindi film you’ll see in theatres this year.

The characters are magnificent. Ravi Baswani makes his screen debut as the cavalier Jomo, a dedicated Lothario who believes in equal-opportunity flirting: no woman is spared from an attempt, albeit a harmless one. His side of the room he shares with two other Delhi University bachelors has the Azmi pin-up alongside many others, plus tall black boots he shines meticulously, and even when he’s swallowed a few punches and is bolting out of a farcically dangerous situation, Jomo stops to gather up his cigarettes and his sunglasses.

Rakesh Bedi’s chubby Omi, on the other hand, believes in muscle-magazines and injudiciously short shorts. He’s failed college a few times, sure, but he loves his ghazals and a spot of shaayari, and -- truth be told, while he may not admit it to Jomo -- prefers watching a play than chasing pointlessly after a girl.

But he talks a very big game, which leads us to the film’s finest moment: when a dejected Omi returns home, puffing thoughtfully on a cigarette and then -- suddenly -- throws it down and twirls dramatically on it, jumping up with an instant spring in his step as he gallops home to regale friends with a grand tale of a conquest that never was.

In the snap of his fingers lies sheer, unadulterated movie magic.

Siddharth is the straighter one, the studious one mostly willing to foot the bill for his freeloading friends. There’s Gandhi on his wall and his shelves, and even the chair he sits in happens to be marked Aristotle. And, as mentioned, his artlessness is remarkable: he patiently picks out a whole new outfit and then, when his girl is impressed and comments on it, he smugly says he’s just been shopping. And he’s just waiting to be told to quit smoking.

Naval, on the other hand, imbues her Neha with such effervescent heart that it’s impossible not to fall for her. She memorably hawks detergent door-to-door to pay for music classes she diligently refuses to ever miss (well, almost ever) and the amount of unaffected joy the actress brings to the film livens it up miraculously.

And she looks dazzling, by the way -- even when imagined as Chhoti Bahu, in black and white.

And that, by no means, is all. There’s neighbourhood paanwala Lallan Mia, played by the amazing Saeed Jaffrey, a genial soul who couldn’t resist peeking at the girl in the pink salwaar-kameez as she strolled by early on, giving the film its plot.

He harangues the trio for never paying for their cigarettes but his threats are but barbs; he threatens to confiscate an LP from the lads but scornfully hands it back. And how he exults about the addition of a bright table-lamp in his shop.

Because Chashme Buddoor is, above all, a film about small joys. About letting a pack of cards decide who gets first crack at a girl.  About admitting that a bracelet is indeed too expensive. About friends with interchangeable wardrobes, all borrowing from each other. About flying kites in the park. About finding inspiration in Amitabh Bachchan movies. And about a brilliantly placed nail to hang a censorious towel on, whenever needed.

Chashme Buddoor is a marvel. Watching it two nights ago made my jaws hurt with laughter, predictably, but also my cheeks ache from constantly smiling. It is a wildly ebullient wonder of a film, very special and soaked in far more warmth than we are currently used to. It’s a treat, and like tutti-frutti ice-cream that is far harder to find than it should, we should lap it up while we can, gratefully and ravenously.