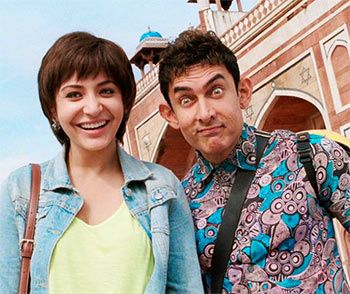 PK is no satire -- it's a bit too toothless for that -- but it is a rollicking mainstream entertainer with ambition to evoke some introspection, says Raja Sen.

How must it feel to look at life through really wide eyes?

Cynicism is always easier than sincerity, and few filmmakers can nail the latter quite as consummately as Rajkumar Hirani, an old-school teller of fables who specialises in giving his audiences lumps in their throats.

His are comforting films, ones with their edges sanded off and their seams showing, films unashamedly lacking in subtlety because he chooses to paint only in broadstrokes.

We can all stand around and point fingers at the indulgently laboured way he makes a point, but the fact remains that PK is a ridiculously effective film, a triumph you are likely to walk away from with a gladder, lighter heart -- and, perhaps, a moister handkerchief.

Aamir Khan plays a visiting alien, a head-nodding explorer out for a recce of our planet.

He's buff and eager and comes from a planet where they don't need clothes, and seconds after landing here, one of us steals his intergalactic transmitter, the remote to signal his ship from home.

Thus is the naked feller stranded and stumped, hunting for his amulet with merely a boombox for cover and company. God help you, say the folks he confounds with his bug-eyed questions, sending him for answers toward temples, mosques and churches.

Madness, as you rightly imagine, ensues.

His tale is being told to us by a girl called Jagat Janani, who, for sanity's sake -- and possible Jackie Shroff fanhood growing up -- calls herself Jaggu.

Jaggu's a plucky girl who has just joined a Delhi-based television news channel.

Still a rookie (and thus still armed with the kind of eager-beaver enthusiasm not yet decapitated by actual time in a newsroom) Jaggu chances upon the alien and, reasonably enough, considers his story more newsworthy than one about a manic depressive dog.

The alien, PK, looks at life as laterally as an aborigine given a copy of the New Yorker, and his uniquely coherent perspective enchants Jaggu.

This is all run-of-the-mill stuff, really, an old trope that could easily be taken from, say, Ron Howard's classic Splash (right down to the nakedness), that of a disarmingly naive outsider taking us at face value.

But the telling is in the details, with Hirani and co-writer Abhijat Joshi giving PK enough genuine insight to keep us hooked.

They do hammer their points home in overlong fashion, however, perpetually taking several scenes to illustrate what a clever set-up and punchline could do in two shots.

This foolproofing, it appears, is very much a part of Hirani's process.

The background score is used in the style of a seventies melodrama, all orchestras set to swell; characters hear things which then echo around in their heads; and there is a fond reliance on age-old cinematic cliches like characters going to a performance only to imagine themselves singing and dancing on stage.

It's all cinematic saccharine, but then, given that Hirani takes the opportunity to aim some potshots at organised religion and its gatekeepers, is the familiar a worthy method to sneak in a message?

A spoonful of sugar to make the medicine go down?

Either way, religion -- not God -- is the enemy here, and while PK doesn't load up the cannons quite as potently as Umesh Shukla's OMG Oh My God did a couple of years ago, it musters up the drama in much more stirring fashion.

And its protagonist is quite extraordinary.

Aamir Khan is exceptional in PK, creating an irresistibly goofy character and playing him with absolute conviction.

He laughs at his goblin-ears and walks around with his eyes on high-beam throughout the film, but his transformation isn't restricted to the physical -- though I must single out and applaud the skittish way he runs, his arms straight by his side with his palms stuck out, reminiscent of Steve Carrell in Little Miss Sunshine when his character was running toward automatic doors, willing them to open fast.

That, there, is the impressive thing about Khan in this film, taking a few one-shot gags and stretching them feature-length so strongly and gamely that he wins us over with sheer heart.

It is this heart that really counts in a Hirani movie.

There is a passage where we see Khan's PK going desperately from god to god, mosque to church to temple, seeking the way to his precious remote, festooned with more talismans than Saurav Ganguly's arm.

In lesser hands this would smell like an empty exercise in audience manipulation, a cheap and easy means to unearned applause.

But it's striking how Hirani and Khan layer it on with visible earnestness, giving us something unexpectedly remarkable in the sight of that megastar immersing himself hungrily in our diverse, demanding rituals.

The rest of the cast is in fine nick.

Anushka Sharma is suitably spirited and full of beans, Boman Irani makes for a fine boss who has felt the ire of a trident before, Sanjay Dutt is wonderfully droll, Sushant Singh Rajput is very likeable indeed and Saurabh Shukla, playing the antagonistic godman, is great at being a pompous god-invoking gasbag.

But this is an out-and-out Aamir film, and he soars.

PK is no satire -- it's a bit too toothless for that -- but it is a rollicking mainstream entertainer with ambition to evoke some introspection, one with compelling moments and some genuine surprises.

Including a humdinger of a last scene.

Make one more, Mr Hirani, make a sequel and take us to the planet of the naked. (We promise not to stare that hard.)