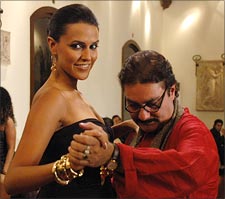 Preeti Arora feels that Pappu Can't Dance Saala is an honest effort as compared to the recent flood of no-brainers.

Not that you've been away for long. Especially Mr Vinay Pathak, who has done these roles often enough in the last five years -- Dasvidaniya, Chalo Dilli etc, etc.

The success of one film (Bheja Fry) has ensured that we must endure simpletons as protagonists in at least a dozen more of these mind-numbing avatars. It's time directors and producers wake up and smell the coffee: Simpletons do not always ensure big-time laughs and break box office records.

Vidhydhar (Vinay Pathak), a medical representative, has just arrived in Mumbai. He isn't fazed by city life, on the contrary, he's convinced about his moral superiority. He lives in an apartment meant exclusively for government employees because that's all he can afford.

His next-door neighbour is Mehak (Neha Dhupia), a dancer from Kolhapur, one of the thousands venturing into the nebulous world of entertainment in search of superstardom. Opposites clash, egos swell, and vengeance must be sought at all costs.
What saves this trite scenario from plunging into utter boredom is the convincing chemistry between the lead pair. Mehak's display of overt aggression effectively covers up her vulnerability. Vidhydhar sees through his neighbour's manipulations but doesn't succumb to her charms. Their relationship develops gradually as hostility is replaced by trust and then friendship.

Pappu Can't Dance Saala is Saurabh Shukla's third directorial venture. The plot focuses so exclusively on the romance between the couple that

it reduces the other characters, be it the society secretary or Vidhydhar's colleagues, to caricatures.

Issues such as civic hygiene and urban noise levels are touched upon in a casual, lackadaisical manner and as a backdrop to the romance. Simplistic to the point of being ignorant, Vidhydhar is unrealistic, even making allowances for the fact that he has grown up in the sheltered world of Benares and not the corrupt city of Mumbai.

Some crisp dialogue and witty repartee saves the first half of the film, but post-interval the usual preachiness takes over and its one big yawn. You've had your fun initially, now it's time for the value education lesson.

The supporting cast boasts of big names who seem to have been thrown in without much thought. Sanjay Mishra as the owner of a food stall fails to make an impact. It's too insignificant an appearance for the actor whose popularity has soared after Phas Gaye Re Obama.

It's great having Naseeruddin Shah in a film. But, again, it's a pity his role is so small.

Rajat Kapoor as the long-haired middle-aged choreographer is convincing. The actor has come a long way from his stilted performance in Dil Chahta Hai.

Neha Dhupia flaunts her well-toned body. And sticks to the maxim of 'less is more'. She displays restraint and refrains from over acting. A wise decision considering Vinay Pathak never misses an opportunity to ham it up.

Pappu Can't Dance Saala is an average film with some decent performances but it is an honest effort as compared to the recent flood of no-brainers (Hum Tum Shabana, Tere Mere Phere or Bheja Fry 2).