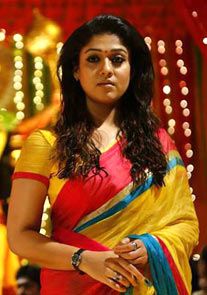 Vidya Balan's Kahaani was well-made, so much was expected of the remake. Unfortunately, Nee Enge En Anbe is not in the same league, writes S Saraswathi.

This film is not a frame by frame copy of the Hindi original.

For instance, Nayanthara, who plays the role Vidya Balan did so brilliantly in Kahaani, is not pregnant.

And while the city of Kolkata formed an integral part of Kahaani, it is the old walled city of Hyderabad that has been brought alive in Nee Enge En Anbe (NEEA).

NEEA opens with a bomb blast at an annual kite-flying festival in Hyderabad, where hundreds of innocents, including young children, lose their lives.

Eight months later, a distraught Anamika (Nayanthara) arrives at Hyderabad airport from the United States to find her husband Ajay (Harshvardhan Rane), who has been missing since a week.

At the police station where she comes to lodge a complaint, she meets Parthasarathi (Vaibhav Reddy), a Tamil police officer, who is sympathetic and offers to help her. Together, they try to put all the pieces of the puzzle together.

Their investigation leads them to a number of people who are mysteriously killed before they can give any clue about the whereabouts of her missing husband.

As the plot thickens, her husband is accused of being dangerous terrorist Milind Damji, who surprisingly resembles her husband and is wanted by the intelligent agencies for several terrorist acts, including the earlier bomb blast.

The situation gets even more complicated when an encounter specialist, Amjad Ali Khan (Pasupathy), is sent by the Home Ministry to investigate. But Anamika knows her husband is innocent and is determined to prove it.

The story moves at an exceedingly slow pace in the first half.  There is no gradual build up of suspense or tension, nothing to pique the interest of the viewer.

You don’t relate to or sympathise with Anamika’s predicament, many of the dialogues are in Telugu without any subtitles, and most of the scenes lack the energy and intensity required of a thriller.

Thankfully, the pace picks up in the second half.  Nayanthara, whose performance is lacklustre in the first half, wakes up and gives a great performance, but perhaps it is a bit too late by then.

Vaibhav Reddy has given a decent performance, but Pasupathy, who reprises the role of Nawazuddin Siddiqui, is a disappointment.

Music by Maragathamani, especially the BGM does add energy to the film. Cinematographer Vijay Kumar does a good job of shooting in some extremely crowded areas, bringing out the essence of the old city of Hyderabad steeped in Islamic culture.

Kahaani was a huge hit so much was expected of the remake. Unfortunately, Nee Enge En Anbe is not in the same league.

Neither the performances nor the adaptation of the National Award winning screenplay, or its execution by director Sekhar Kammula does the film any credit.

The bilingual has been simultaneously released in Telugu as Anaamika.