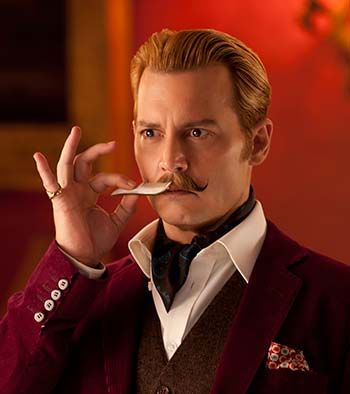 It is difficult to understand why Johnny Depp agreed to make Mortdecai, says Paloma Sharma.

Lord Charlie Mortdecai (Johnny Depp) -- an aristocrat, art dealer and moustache aficionado -- is a character so stereotypically English that one would think an Indian wrote him as a joke, as a sort of revenge for the almost 200 years of colonization.

Reeling under debt, yet unable to give up his lavish lifestyle, Mortdecai is enlisted by MI5’s Inspector Martland (Ewan McGregor) to track down a lost Goya painting which conceals the details of a Swiss bank account that has been hiding Nazi treasure.

Mortdecai must manage to retrieve the rare work of art, save his estate and find a way to let his wife keep his moustache. All this, without getting killed by Russian and Chinese gangsters.

Mortdecai is clearly, as they say in Bambaiya, an ‘antique piece’ who belongs to a bygone era. So is Depp’s rendition of him.

Depp merrily skips ahead on the yellow brick road that is the silver screen, on his way to the Emerald City of box office success, and sprinkles colourful, sharp little shards of Barnabas Collins and Jack Sparrow along the way.

But for the viewers who must trod down the same path, after Depp, said shards only enhance that stinging sensation of discomfort as one watches him play the same man under a different name, yet again.

Nevertheless, it would be unfair to lay the blame entirely on Depp. What’s a poe, lil’ Hollywood star to do when he finds himself signed to a film with budget that looks infinitely more interesting than the script?

Eric Aronson, who last served as screenwriter on 2001’s rather rancid rom-com On the Line, adapts the screenplay from Kyril Bonfiglioli’s collective works centring on Charlie Mortdecai. Aronson spins a yarn so knotty that it looks like a saliva-laden hairball which the cat coughed up while searching for leftover fish in the dumpster.

Sub-plots diverge from the main story rapidly and without restrain, corroding the already delicate fabric of the tale, held together by the feeble threads of David Koepp’s direction.

Koepp seems to be happy to let Depp run wild -- a measure that Depp, perhaps, felt compelled to employ in order to cover up glaring loopholes in the script.

While Depp’s narration of events from Charlie Mortdecai’s perspective provides much needed comic relief, along with Lady Mortdecai’s reaction to her husband’s facial fluff, most gags trip over their own shoelaces.

Paul Bettany emerges as an unlikely comic talent, who (dare I say it?) even overshadows Depp in a pivotal scene between master and manservant.

Gwyneth Paltrow is a pretty prop whenever the film needs somebody to saunter down a  grand staircase or beguile men into revealing information by flirting with them.

If it indeed is true that Mortdecai is only a first of a franchise-in-the-making, then an actress of Paltrow’s calibre might want to consider consciously uncoupling from it.

Mortdecai pays more attention to costume design and make up, exotic locales, and downright dreadful animation, than it does to character development, direction or Depp control.

The film does not boast of commendable cinematography or exceptional production design. Mortdecai, visually, starts feeling like flipping through an issue of a glossy fashion magazine: filled with beautiful backdrops and charming costumes but not much else.

In its present form, it is far too cartoonish-ly stylised.

It is difficult to understand why Koepp, Depp, Paltrow, Bettany and Aronson agreed to make the film.

Mortdecai, eventually, is but a joke -- an inside joke, which only the above mentioned five persons will find amusing. The rest of us must suffer through it.