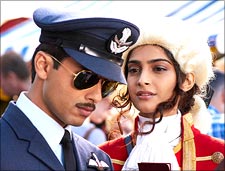 Our hero, a bizarrely uptight young air force officer, sits across from the beautiful woman he loves, yet seems afraid to smile. Suddenly, in what may be perceived as a moment of weakness, humanity or merely kindness toward an exasperated audience, he lets his guard down and says, "Yeah, baby." And then he grins.

Bad, bad idea. He knows it; cluelessly, abruptly, his face automatically falls. Not everyone can get away with that, and in his latest film Shahid Kapoor is visibly better equipped to play a baby than call a woman one. For the cosy first half-hour or so of Mausam, he does so with gusto, a delightful young rapscallion with cheek and vigour.

Set in a small and very warmly depicted Punjab town, Mausam kicks off most entertainingly. The elderly gent playing the befuddled yet gruff village chieftain is an absolute treat and unquestionably the finest thing in the film, while cinematographer Binod Pradhan, capturing earthy frames with unusual yet fluid grace, earns a clear second place. The rest of the folks involved, including debutant director (and the best actor in the history of Hindi cinema) Pankaj Kapur are best advised not to look at the marks-sheet with much optimism.

Mausam starts off significantly fresh, making up for slightly overdone cutesiness with heart and flavour. The setting is enchanting and real, the characters are likable, the supporting cast stays pretty solid throughout, and Shahid revs up the energy while his classically gorgeous heroine Sonam Kapoor does what she does best, skipping around looking breathtaking.

It is when the film changes gear from romcom to melodrama that both Kapur and his son struggle, going from light and likable to irritating and implausible. The couple that initially wins us over gradually emerges harebrained and inexplicably passive. We never root for either girl or boy, because they coyly retreat just when they shouldn't. The passion the film began quickly turns lukewarm, because as Mausam and Shahid begin to take themselves seriously, we stop having fun. And, more importantly, giving a damn.

This is a love story gone awry purely because of undercommunication, and while that seems fine enough on paper, it's rather hard to swallow two lovers cleaved for well over a decade simply because they don't have each other's forwarding address.

This isn't a period film. Cellphones, email, academies and embassies, answering machines all exist. Our leads are well-to-do youths of significant affluence and sophistication, and neither makes standard enquiries? No, because we're supposed to sob over the old-world sight of letters piling up in an unpeopled courtyard.

Sure, mosques are smashed and wars break out, but the real-life atrocities the film uses as background soon feel like predictable gimmick. Worse still, they serve only to underscore the film's repetitive, episodic nature, making the already overlong Mausam feel like several seasons too many.

Kapur frequently salutes Dev Anand's superlative Hum Dono, borrowing far more than a great song. A man goes to war incommunicado with his lover, with no clue of her whereabouts. A moustached soldier loses the function of a limb, and wonders aloud whether his love will still want him. A woman stays steadfast in her affections for her man, no matter how steadily he neglects her. Except Hum Dono has both well-defined motivations and strong characters; this one has a couple of flibbertigibbets, a man disgracefully churlish and the woman too bashful to ever speak up.

Sonam's Aayat is a thankless character with an exquisite name, one I first encountered in Gulzar's Chhaiyya Chhaiyya. (It means a hymnal couplet.) The first time we meet her we hear an alarming giggle before we see her face, and the second time she screeches out of a nightmare. This, despite there being much pretty smiling in the first act, somewhat sets a tone. In the rest of the film, she waits and pines, and is made to simper an awful lot. We've seen it before, and Kapoor knows what she's doing. The actress shows genuine grace, once even while in a Mozart wig, and one wishes her character was smarter.

Shahid, as said, makes for a smashing small-town scamp but is inexplicably somber as a decorated IAF pilot. His Squadron Leader Harry is the kind of guy Tom Cruise's Maverick would have made faces at, no-nonsense to a ridiculous degree. Once in uniform, he's too self-serious to be taken, well, seriously, and we're treated to a plywood-stiff performance, all pruned lips and occasional MohnishBahl-ery. He's pretty good when in action, when running frantically across snow or while one-handedly trying to douse a fire (looking like a wrestling referee going for the three-count) for example, but the problem is when he sits down quietly and tries so very hard to look thoughtful or introspective or melancholy: there's only that much you can say by sucking your cheeks in.

The film provides some genuinely affectionate moments -- one where a song turns almost to karaoke as the lovers scribble notes making up the lyrics -- and some curious but lovely detailing. A pair of small binoculars, opera-glasses actually, with a scarlet stain that could be both blood or betel seems like a sinister clue to a later revelation till the girl efficiently and unthinkingly wipes it clean; and later Shahid dancing at a wedding with a checked-shirt under his sweater reaching down to the knees of his jeans, looking quite a bit like a kilt: a fine precursor to the film's next venue, Edinburgh.

But no lovely little nuance could forgive Mausam its preposterous bad-action-movie climax, completely bringing the guillotine down on the already too-long film. As manipulative masala tearjerkers go, it's a film that tries relatively earnestly and certainly one that occasionally looks striking, but disappoints overall.

Finally, giving you opinion about a film called Mausam turn us critics into weathermen, so here goes: Bright and cheerful day, hit by a predictable, gloomy downpour and turned into a damp, middling mess. Perfect one-day cricket conditions, as the English would say.